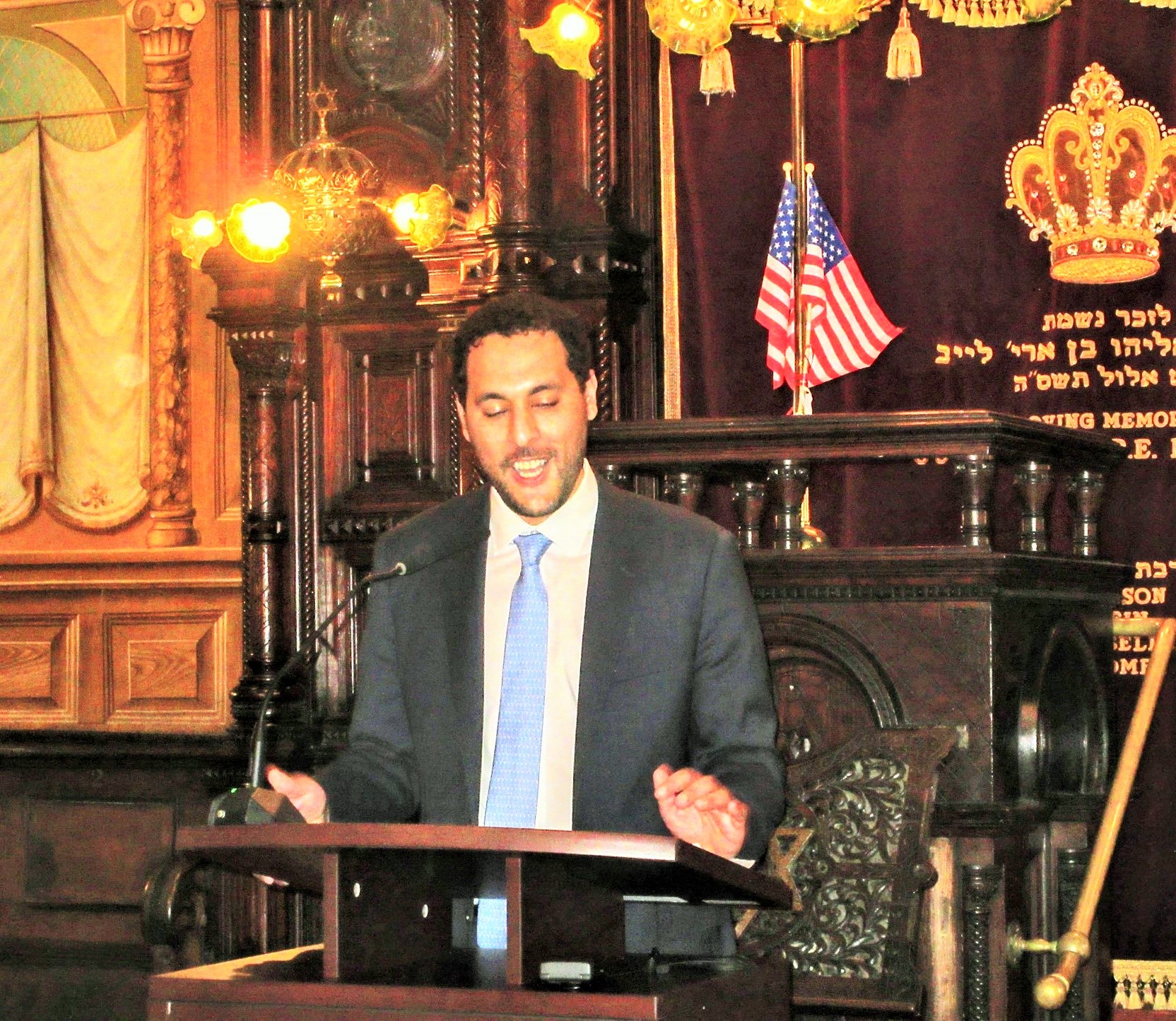 Christopher Marte said that in just two months in office, he has already made progress on the community's agenda. (Photo by Dashiell Allen)

BY DASHIELL ALLEN | Christopher Marte was greeted by a diverse and enthusiastic crowd Sunday at the Eldridge Street Synagogue Museum at his official inauguration as councilmember for Lower Manhattan’s First District.

The day’s festivities were a testament to the diversity of cultures present in Lower Manhattan. There was a special performance of Beijing opera and 7-year-old superstar Richard Tang sang the national anthem.

There was music by JuanMa Morales, the leader of the Latin band Sonido Costeño, and a passionate speech by Lai Yee Chan, a 24-hour home healthcare attendant for the Chinese-American Planning Council. To top it all off, there was lion dancing.

In his inaugural address to the district, Marte took pride in his accomplishments so far in the new year.

“It’s been two months since we took office and we’ve already made progress in our agenda,” he said. “We got the first veto in over eight years to help mitigate the damages of the Soho/Noho Chinatown upzoning.

“We demanded that the city provide air monitors to protect the health of NYCHA [public housing] residents along [East River Park], and an independent monitor to stand up for residents in the Two Bridges. We met with the commissioner of City Planning to draw out the road map to finally pass the Chinatown Working Group Plan. We embarrassed a $3 billion company into changing its business practices to protect their delivery workforce, even before our bill was introduced in the Council,” said Marte, referring to a bill he plans to introduce prohibiting grocery delivery services from listing 15-minute delivery times.

And, in a surprise announcement, Marte indicated that he had convinced Mayor Eric Adams to reverse course on building a new “megajail” in Chinatown.

“Let me tell you what happened this past Friday,” he said. “I met with the mayor and his leadership team, and made the case not to build a jail in Chinatown. There were people on that call that want the jail to happen. But we won the mayor over to our side.”

Marte also spoke passionately about the long road he took to finally reach the City Council, starting with his first run for office four years ago when he nearly upset incumbent Margaret Chin.

According to him, that race in 2017 was the first step, as he put it, in cracking “the foundation of a corrupt political machine funded by developers trying to buy us out.”

He described how, after that loss, he went on to work tirelessly to help build neighborhood coalitions to continue fighting on local issues.

Perhaps no word captured the meaning of the moment better than “doors.”

“What doors? How many doors? Where are the doors? Who’s behind that door? … Thousands and thousands of doors and the people behind them built this election.”

His speech impressed Congressmember Carolyn Maloney, who said she saw a “future congressman” or “future mayor” in Marte.

“I think he’s got a bright future,” she said, “Wherever he goes, he’s going to make a big big difference in our country. Look what he’s already accomplished, he’s been in office two months and he takes my breath away.”

“I’ve seen a lot of public servants over the years,” Nadler said, “some of them very good and some not so good. Chris, I predict, will rank with the very best, because of the work he’s already done in the Lower East Side, Chinatown, with the issue of the upzoning, with the issue of the jail, with other community issues, and the fact that so many people here have come to celebrate his victory, to celebrate his inauguration, tells me what broad support he has within the community.”

“I know everything about your community because Chris has told me,” said Espaillat, the first Dominican American to serve in Congress. “I know about Park Row, I know about the jail, I know about upzoning,” he said, adding that he wished there could be a direct tunnel connecting the Lower East Side with Washington Heights.

“You rarely find someone who is so committed and so involved in the community. He got here the old-fashioned way — he earned it,” said Senate Majority Leader Chuck Schumer, who was also in attendance. He added he was impressed by Marte’s connection to his district from the moment he met him last fall at Scarr’s Pizza on Orchard Street.

“I am so overwhelmed by the symbolism of this moment, this day, this date, this sacred place, this incredibly diverse crowd,” said Mark Levine, the newly elected Manhattan borough president, who came out in support of Marte’s candidacy last October.

“Today we are uplifting and celebrating a full-fledged leader,” Levine said. “I have a feeling that Juan Pablo Duarte [the founding father of the Dominican Republic] is feeling very proud right now seeing a young man, the child of immigrants, leading in this way for his community.”

“Whether it’s stopping displacement from luxury high-rises or opposing new jails, Chris has stood beside workers and people of community of every industry,” she said. “No more sweatshop bosses, big real estate developers or sellout politicians.”

The inauguration’s location was itself emblematic of the mixing of peoples that call the First Council District home. A Jewish temple, the Museum at Eldridge Street also hosts the annual Egg Rolls and Egg Creams festival — a celebration of both Jewish and Chinese culture.

The historic synagogue, which dates back to 1887, was once at the heart of the Lower East Side’s Eastern European Jewish community. The meaning of that legacy was not lost on Bonnie Dimun, the museum’s executive director, given Russia’s ongoing invasion of Ukraine.

“You are our extended community. You are all welcome always through these doors,” she told the crowd. “As we all know, there are other places where people are running and are frightened and are scared; and we stand with them for peace, and hope that we will all be able to rejoice in democracy throughout the world.”