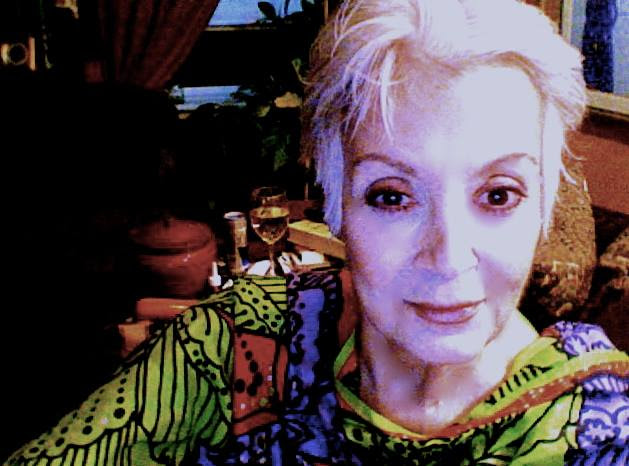 BY MARY REINHOLZ | She couldn’t have been much more than 5 feet 2 inches tall, a petite gamine who worked at places like the Benton & Bowles ad agency, Harper’s Bazaar and Screw, the sex tabloid, back in the swinging 1970s. Later on, graphic designer/art director Bettina (Tina) Rossner had her own business, Mind’s Eye & Rossner, designing books, games and an album for Yoko Ono. She once told me, “I’d like to redesign the world.”

On Dec. 17, ten days after her birthday, Rossner, a longtime friend of this writer, died at 76 in her sleep of heart failure at her apartment in Albuquerque, New Mexico. She was cremated Dec. 31, according to her writer cousin Jerry Schmetterer, a former editor at the New York Daily News. Survivors besides Schmetterer include her brother, Mark, and another cousin, Bernie Schmetterer, who lives near Rossner’s digs and had found her unresponsive. She had been in fragile health for many years.

Jerry Schmetterer said his brother Bernie handled “all the arrangements” after Rossner’s passing, noting, “All who knew her, loved her.”

This aging scribe cherished Tina for her wit, intelligence and humanity. Acclaimed graphic designer and author Steven Heller recalled her as “very sexy” when he was a young art director at the now-defunct Screw. Heller went on to become a 33-year veteran art director at The New York Times and now co-chairs an M.F.A.-degree program in design at the School of Visual Arts on E. 23rd St.

Heller, 70, said he can’t recall whether Rossner was put on staff by the late Screw Publisher Al Goldstein or was freelance when she was working in his art department at the notorious sex review. But he remembers that she didn’t cause “any irritation to anyone. She was matter of fact, friendly and had a good sense of humor.”

He also remembers walking by her former apartment building at 229 W. 22nd St., located near the Screw office at the time. The four-story walk-up remains owned by the Chelsea Hotel, which calls it “The Townhouse.” The run-down spot is connected to the hotel by an underground tunnel.

Rossner lived there for some 48 years after graduating with a B.F.A. from Pratt Institute in 1966. She relocated to New Mexico for the last five years of her life after obtaining an estimated $450,000 settlement in 2014 from King & Grove, then owners of the Chelsea Hotel, in exchange for vacating her rent-controlled $331.81-a-month studio apartment.

This was a place where she had withstood three ceiling collapses in her third-floor apartment — suffering, she told me, a “mild stroke” after the last one — when Joseph Chekrit was the controversial owner of the Chelsea Hotel and started a round of renovations there in 2011 that continue to this day under new management.

Tina and I became friends in 1972 when I was new to Manhattan, a California girl living in a grim budget room at the Chelsea Hotel and researching an assigned story on women’s sexual fantasies amid the rising tide of female empowerment. Tina, recommended to me by Screw Co-publisher Jim Buckley as “very imaginative,” later tipped me to an impending vacancy in her building, the aforementioned townhouse. She was a strong proponent of women’s liberation, especially in the arts, and helped me paint the dingy studio a mellow yellow and pretty much ordered me to clean up my own clutter several months later.

“Good Goddess! I just found an eggshell under your bed!” she exclaimed.

Looking back, Tina in my mind’s eye seems like a paradigm of the hip second-wave feminists of the ’70s, a precursor to contemporary young women in New York not totally unlike those portrayed in the “Sex and the City” television series (1998-2004). Although she had plenty of suitors in her 20s and 30s (briefly dating science-fiction great Harlan Ellison), I don’t think she ever found a Mr. Big and remained single all her life, once struggling with addictions to both cocaine and alcohol. She quit both, along with cigarettes, in the late 1980s with support from AA and its spinoff self-help groups. I came to think of her as a physically delicate but ultimately indomitable woman.

“She was a loner, I think,” said her junior high school friend Kathleen Vogel, who now lives in Irvine, California, where she earned a law degree from U.C. Irvine and describes herself as now “retired” from the legal profession. “Sorry I never saw her again as she didn’t go to reunions.” Even so, Vogel remembers Tina from the seventh and eighth grades in New Milford as “caring, creative and smart.”

Paul Nadel, vice president of business development for the Promotions in Motion companies in New Jersey, also knew Rossner as a student in New Milford. He said most of his classmates “knew about her artistic abilities from a young age. She liked fashion.” He noted she was a good student “and very artsy.” He said that Tina,  who loved horseback riding, “was always drawing horses when she was young.” Nadel had also known Rossner’s brother Mark, who, he said, “was a quiet kid as was her father.” Nadel’s mother, he said in an e-mail, “played mahjong” with Tina’s mother back in the 1960s.

Both Nadel and I received Facebook messages from Tina saying that she had broken a leg recently. She was getting around with a walker. Despite this setback, she urged me to come visit her in New Mexico and “share the driving” to scenic places she wanted to see. Late in November, she posted a snapshot of birds forming a smile in the sky. The headline read, “One in a million shot…A smile from Heaven…” Even in my deep grief over her passing, I’m guessing that my friend Tina Rossner knew she would be heading for another clean and well-lighted place, impeccably designed.