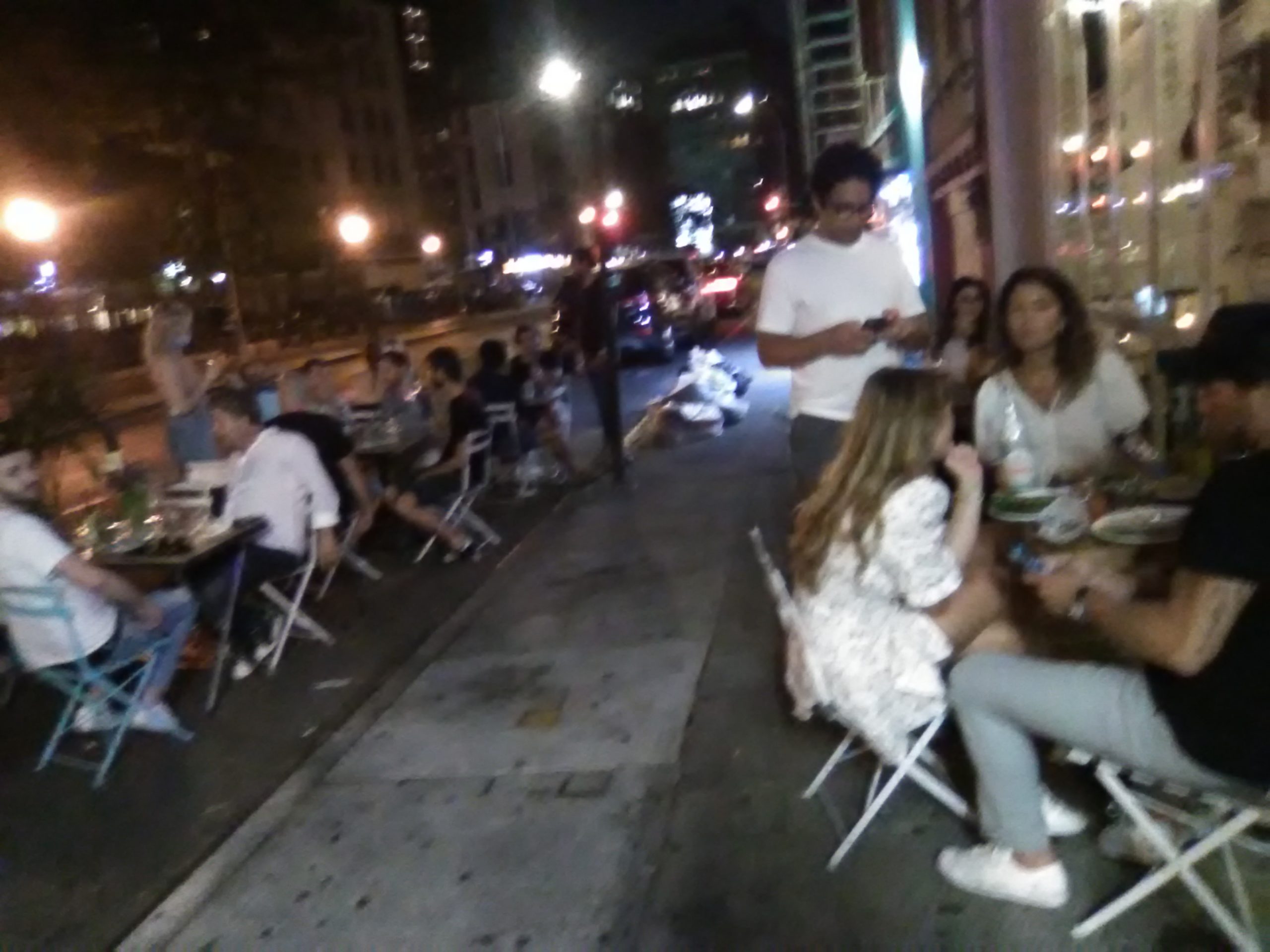 Outside a restaurant on narrow Cleveland Place in Petrosino Square, a man standing without a face mask, at right, mills about in order to socialize with people at other tables. Diners are only supposed to have their masks off when they're seated. (Photo by Georgette Fleischer)

BY GEORGETTE FLEISCHER | Last night my 2-year-old daughter and I were awakened in the wee hours by two different men, who destroyed, separately, two stretches of what should have been our sleep cycle, their inebriated bellowings rending Petrosino Square, a small triangle at the crux of Little Italy and Soho that has no fewer than nine liquor licenses, seven of them whole hog on the NYC Open Restaurants program.

The operator in our building I nominate as worst offender. Furious that Community Board 2 and the New York State Liquor Authority denied his application to expand hours of operation and decibel levels, and host private parties in the unlicensed cellar, this businessman is vindicated by de Blasio’s most recent and lavish largess to the nightlife industry, which arrives in the wake of his laughable presidential gambit.

But we’re in the middle of a pandemic. Cases in the U.S. are surging. Texas and Florida have made sudden pivots on food and beverage in order to stem dangerous swells of sickness and death. What the hell is de Blasio thinking? Does he think about anything other than his own political ambitions?

I have to push my daughter’s stroller past sidewalk cafe tables whose chair backs are touching each other, past a roadbed cafe that blocks the fire hydrant that serves tenement buildings housing toddlers to octogenarians and which hijacks the building frontage to our north.

Worse, the nightly pandemic party is crowded into this no-rent real estate in complete disregard of social distancing rules and without a face mask in sight (that I have seen), either on patrons or staff.

As I told the businessman on Tuesday as I photographed the fire hydrant blockage (while he heckled me), I am terrified my little daughter will be infected by the crowds he’s gathering.

After Ladder 20 of the F.D.N.Y. got him to temporarily clear the required 15 feet, this man rushed me as I entered my building’s front door from a run, came within 2 inches of my face — no mask, ever — in order to film me, as he has done another tenant who complained of his infractions: in her case, he posted video online to ridicule her.

“You have no right to do that,” I stated, calmly under the circumstances. “It’s harassment,” I told him.

I’ve filed a complaint with the Fifth Precinct.

About the lack of social distancing, I have made four 311 complaints on four consecutive days. So far, no response.

De Blasio’s press machine claims there will be enforcement. Pure doublespeak: “The preference is to educate owners and operators in order to improve a restaurant’s social distancing practices,” and “chronic violators may face fines, have their liquor license revoked or their Open Restaurants eligibility suspended.”

Educate owners and operators… Reminds me of the time I was told that student plagiarism should be treated as a pedagogic not a punitive moment.

“May” face fines, etc. … Read: Will face no repercussions whatsoever except in the most extreme circumstances, and possibly not even then.

Classic mixed messaging. No wonder the operators are out of control. It will only get worse. People will get sick. Some will die. For those of us who have lost family and friends already this is bitter. No. It’s disgusting.

But Mayor de Blasio is eating well, thank you very much, and enjoying his beer.

They say Nero fiddled while Rome burned. De Blasio gorges and guzzles in the middle of a pandemic.

I would like to nominate him. For his narcissism and self-indulgence, for his reckless disregard for human life, the worst mayor ever.