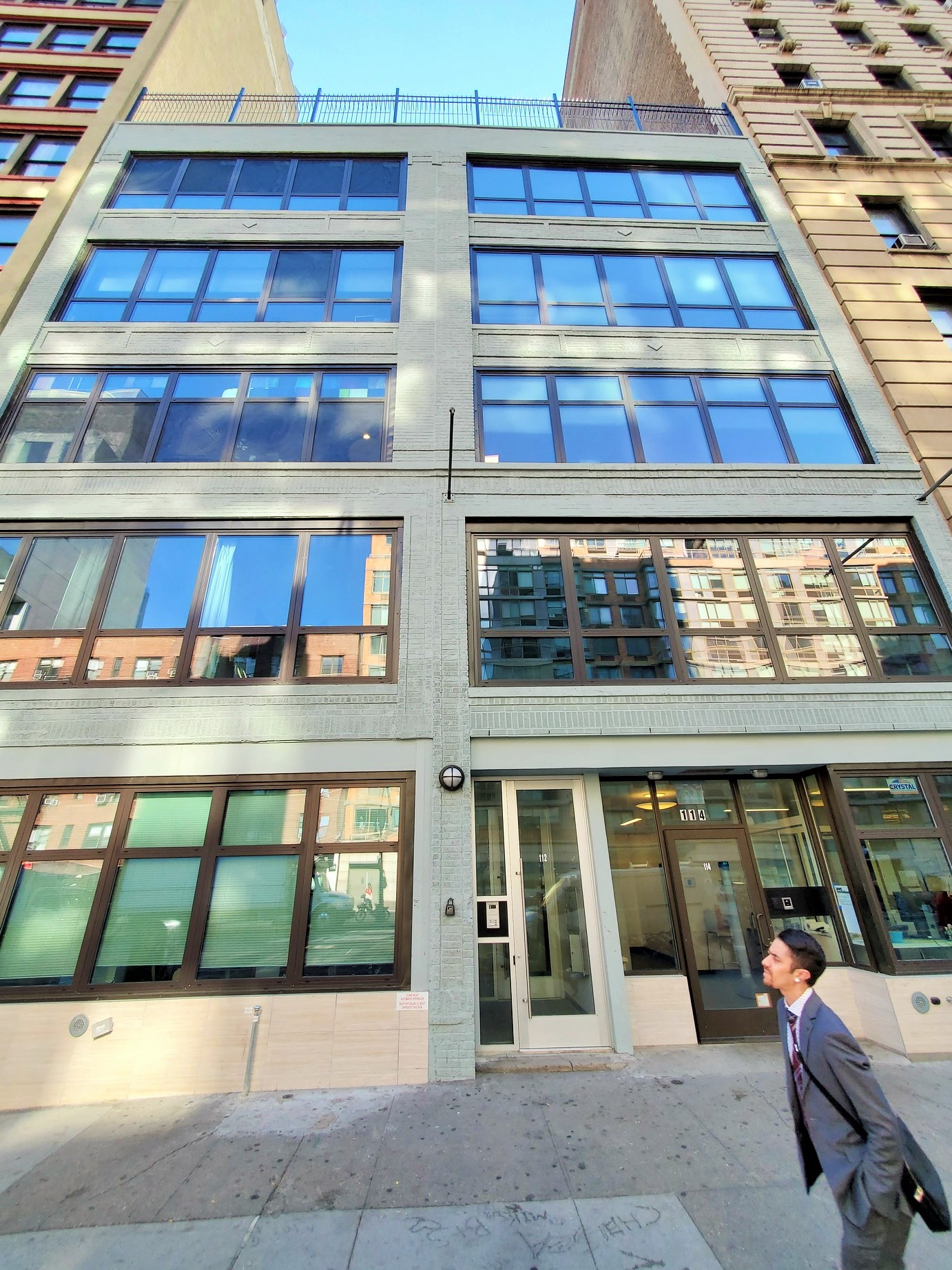 Paul's Place has been operating for several months now. (Photo by The Village Sun)

A visit to Paul’s Place: New W. 14th St. homeless drop-in center / Safe Haven tries to stay under radar, but there have been some blips

BY LINCOLN ANDERSON | Paul’s Place, a new homeless drop-in center and Save Haven-style transitional shelter, opened in Greenwich Village in September. It was a soft opening but, before too long, the place ramped up to full operating capacity.

Located at 114 W. 14th St., between Sixth and Seventh Avenues, just east of the Salvation Army building, the facility is operated by Center for Urban Community Services, or CUCS. It’s currently the only homeless shelter in Community Board 2, which is bounded by 14th and Canal Streets, the Bowery/Fourth Avenue and the Hudson River.

CUCS’s hope is that people — other than those using its services — are not even aware Paul’s Place is there. Nancy McMurray, an assistant program director, gave The Village Sun a tour of the site in early November.

Upon entry, you are greeted by a sign that reads, “No Drugs Allowed in Building.”

You then pass through two large poles that screen for weapons. On the ground floor is the heart of the drop-in center, 34 recliner chairs where people can stay for as long as they like, though usually not for more than a day at a time. Up to 10 straight-backed chairs can be added at night, if needed. The recliners are more comfortable and helpful for people that might have circulation problems in their legs or feet.

In November, the site was seeing about 40 to 50 drop-in clients per day, with at least two dozen regulars.

Setting the drop-in center apart from traditional homeless shelters, such as the Bellevue men’s shelter, at 30th Street and First Avenue in Kips Bay, there is less screening here before entry. The idea is to have a low bar for entry, so as not to dissuade street homeless who have been resistant to “coming indoors.”

According to McMurray, the average number of outreach efforts to get a street homeless person to come inside is 17 in order to build sufficient trust.

In addition to passing through a weapons detector, clients are screened for COVID and are told the rules of the facility. Face masks are required for everyone, which is the policy of both Paul’s Place and the Department of Homeless Services. New clients also must do a 90-minute psychiatric and “psych social” evaluation.

When The Village Sun visited, most of the recliners were being used by homeless people. McMurray did not make any of the drop-in clients available for interviews.

A wall runs down the middle of the room; one side has TVs, the other does not — so people can choose to watch or not. Just beyond the seating area are showers, which are available 24/7 but with a 30-minute time limit on use. Paul’s Place provides towels, toothbrushes, toothpaste and shaving cream.

Scattered throughout the building are offices and meeting rooms, including ones for a psychiatrist and physician and for dispensing medication.

In the basement is the cafeteria, a dining area and seven washer/dryers for laundry. There are three meal times per day.  There is also a storage room where people can safely leave bags of their stuff — which is important for homeless people since they often carry all their possessions with them.

“This is a big deal,” McMurray explained, as she gazed at the racks piled with bins and clear plastic bags full of clothes and sundry items. “Their bag means everything.”

Clients must sign in to use the showers, laundry and storage area. There are also lockers with combination locks that people can use.

“We have had some issues with things being stolen,” she noted. Although it was also discovered that sometimes phones were not stolen but simply had fallen through a crack in the recliners.

On the second floor, at the building’s rear, is an outdoor patio where clients can smoke. This wasn’t yet open when The Village Sun visited because it still needed to be outfitted with chairs, an awning and a heater. Back in November, McMurray said staffers were telling clients who wanted to smoke to “take a walk around the block…keep it moving,” instead of hanging out in front of the place, which was a concern of neighbors.

Near the patio was a “bedbug zapper” device to debug garments and other items.

An important issue the drop-in clients often work on while at Paul’s Place is securing identification.

“People can get mail here,” she added.

Meanwhile, on floors three through five is the Safe Haven, which has 24 rooms where homeless people can typically stay for three months while being placed in permanent supportive housing. If a client leaves his or her bed empty for three days, then it is given to someone else. A security worker does a safety check of the Safe Haven hallways every hour. When The Village Sun visited, 19 of the rooms had occupants. The clients, who have an elevator key to their floor, cannot have guests in their rooms.

Because of housing codes, due to every room not having its own window, the rooms have a 2-foot open space at the top of their walls. There are no TVs or music speakers allowed on the Safe Haven floors, though sometimes people will watch things or listen to music on their smartphones. Paul’s Place gives them headphones so they don’t disturb their neighbors.

The small rooms notably each have a box for sharps on the wall, which would seem to contradict the facility’s no-drugs stance. Asked to clarify the building’s drug policy, Paul’s Place sent the following response:

“Drugs and alcohol are not allowed at Paul’s Place. If alcohol or drugs are observed in client possession, they will be confiscated by security staff. If clients refuse to dispose of the drugs, they will be asked to leave the facility.

“Paul’s Place utilizes a harm-reduction model when working with clients. This means we encourage clients to be open and honest about their use, and to use safely as this is the most effective way to combat substance-use disorders and keep people from dying. However, we realize that some clients may not be open with their use, or at a place to share with staff. We do not have a way of monitoring private behavior inside of Safe Haven units, so encourage safety and trust building.”

Asked if police have had to respond to any incidents at Paul’s Place, McMurray was forthcoming, saying yes.

A trained social worker, McMurray has been with CUCS seven years. Before that she was a supervisor at The Lee, a 270-unit supportive-housing residence at E. Houston and Pitt Streets on the Lower East Side.

“I loved The Lee,” she enthused, adding, “Paul’s Place has been everything I dreamed it would be.”

However, a visit to Paul’s Place for one homeless couple turned into a nightmare, as they told it. Beth Siegel, 55, and her boyfriend, Michael Doyle, 62, called The Village Sun to report they were assaulted outside Paul’s Place one night in late November by a group of clients who had been inside the place.

Siegel said it was sparked when she tried to charge her phone in a six-plug outlet and one of the other group claimed he needed “permission.” She wound up getting punched in the face and her boyfriend beaten with a cane, sending him to the hospital for 16 stitches to the back of his head and five in the front. Meanwhile, she claimed the Paul’s Place staff and security did not intervene and that some even laughed at them as it became clear violence was about to erupt.

Siegel, who said she graduated from St. John’s University, admitted that previously she was a heroin user but is now on methadone.

“I’ve been clean,” she said. “They call  me a junkie. I’ve been doing everything right. I was on benzos, I got myself off of them.

“I was happy just to be somewhere I thought was safe,” she said of Paul’s Place, adding she won’t go back. “I wouldn’t trust them. I’d be terrified.”

In early December, Deputy Inspector Stephen Spataro, the commanding officer of the Village’s 6th Precinct, said a collar had been made in the attack on Siegel and Doyle.

Asked if these arrest and complaint numbers were high, Spataro responded, “There aren’t many locations — in the 6th, if any — that have that kind of volume.”

One neighboring property owner said, “There’s been a lot of issues” with the drop-in center.

“It’s a big problem,” he said, requesting anonymity. “This is a 24/7 shelter. We already have the Salvation Army on the block. How much more can we take? I’m sympathetic that they’ve only been open three months, but we’ve been begging them to turn it around. There have been multiple incidents in front of the shelter. They said it would be invisible — far from it. I got a lot of photographs. I got a lot of e-mails. I got a lot of everything.”

Asked for comment on the attack on Siegel and Doyle, Linda Shimer, CUCS deputy chief program officer, said, “The incident that occurred across the street from Paul’s Place happened between clients. No neighborhood residents were involved and our response to the incident was immediate. The staff at Paul’s Place take issues like this very seriously and always prioritize the safety of our clients and neighbors. Paul’s Place never tolerates violent behavior and all who were involved have been suspended from the site.”

A P.R. rep for Paul’s Place added that clients from the Salvation Army line up outside of it, so people might confuse that group with those from Paul’s Place. The latter also has a midday cleaning, during which its clients go outside on the sidewalk, he said.

In terms of other homeless shelters planned in C.B. 2, a women’s shelter slated for the former Larchmont Hotel, at 27 W. 11th St., is reportedly in litigation after two of the six long-term tenants who were living there sued to stop the project. Word has it that someone other than the plaintiffs may be funding the lawsuit.