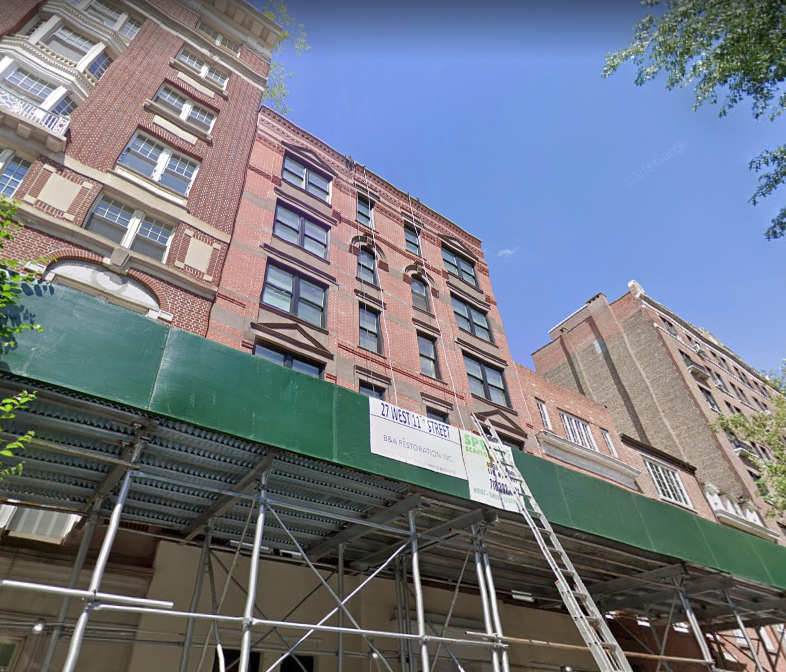 The Larchmont Hotel, at 27 W. 11th St., is in the pipeline to become a women's homeless shelter. (Google Street View)

BY THE VILLAGE SUN | Community Board 2 is strongly supporting a plan for a new women’s homeless shelter on W. 11th St. The board says it wants to do its share in the effort to fight homelessness and help “women in need” get back on their feet.

But not all neighbors are sold on the idea — and are saying, “Slow down.” And they apparently have already retained an attorney.

C.B. 2 gave its approval — which is advisory only — to the shelter plan at its full-board meeting on Thurs., July 23.

However, the board’s review actually was not even required since the project is what’s called “as of right,” as in, needing no special approvals. Nevertheless, the city’s Department of Homeless Services reportedly urged the board to review the project at its Social Services Committee meeting.

Currently, C.B. 2, which covers from 14th St. to Canal St. west of Bowery/Fourth Ave., has no homeless shelters within its district.

The de Blasio administration, however, has identified the Larchmont Hotel, at 27 W. 11th St., between Fifth and Sixth Aves., as a site for a new shelter for 90 women.

The women would be assessed by the Department of Homeless Services as “having no significant barriers to employment,” though some might need ongoing support services, such as for mental health or substance abuse issues. The women would be already employed or seeking employment and would transition to permanent housing.

The plan is for the shelter to be run by Project Renewal, one of the city’s largest homeless-services organizations, founded in 1967. Eric Rosenbaum, Project Renewal’s C.E.O., said the women would live there for a year to a year and a half before transitioning to permanent housing.

The shelter would include an employment program to help the residents get jobs.

Residents would not be allowed to receive guests, would not have children living with them and have a 10 p.m. curfew unless their work required otherwise.

The building would need to undergo extensive renovation for it to open as a women’s shelter two years from now, as planned, he said, adding that the work would be under the supervision of the Fire Department.

Project Renewal is in the process of finalizing a rental lease with the property’s owner, Shep Morgan. The landlord would oversee the renovation of the building, following a design process in collaboration with D.H.S. and Project Renewal.

Despite the pandemic, in May the landlord filed with the Department of Buildings to add a fiberglass cornice and replace windows.

Project Renewal has not yet entered into contract with D.H.S., whose typical contract duration is nine years and renewable.

Mayor de Blasio has called for reducing the city’s reliance on the current 360 hotels and “cluster unit” settings that it has used as homeless shelters, deeming these to be of high cost, inferior quality and segregated within the city. Instead, his “Turning the Tide” plan promises to create 90 newly purposed shelters operated by top-notch providers. The cluster shelters have already been converted into affordable housing units for former D.H.S. shelter clients who resided in them.

However, during Thursday’s full-board meeting, several local residents raised concerns over the E. 11th St. scheme, saying it was being “fast-tracked.”

Attorney Jim Walden said he was representing a group of local residents “who want to support the homeless efforts by the city.” Yet, he urged C.B. 2, “Please, slow down.”

Previously, Walden represented a broad coalition of Village and Soho residents, preservationists and activists in a community lawsuit six years ago against New York University’s 2031 expansion plan on its two South Village superblocks. That suit ultimately went all the way to the Court of Appeals, New York State’s highest court, but was defeated.

Walden noted that the Project Renewal shelter plan was only first vetted by Community Board 2’s Social Services Committee last month. He charged that 27 W. 11th St. currently has 23 open violations. He added that the building is landmarked, lacks a fire exit and there apparently has been no asbestos remediation done on it yet.

On top of that, the former hotel, which was built in 1889, simply is too small for the city’s plan, he said.

“I don’t think there’s any way you could squeeze 90 people and 25 staff members into that building,” he stated.

Harmon Skurnik, who said he lives next door to the Larchmont, commented that the shelter project “seems to be slipping quickly and quietly” under the radar and into reality.

“We don’t know why,” he said, “with the vast inventory it owns, the city chose to use this small building on a quiet, landmarked street.”

Skurnik raised concerns about shelter residents smoking on the sidewalk and hanging out in front of the place, as well as truck deliveries to the shelter that could tie up traffic on the block.

Project Renewal reportedly is looking into the idea of having an “on-site exterior space for smoking,” as opposed to letting the women smoke on the street in front.

On the other hand, Nataniel Wice, who lives three doors down from the proposed shelter site, noted that all 50 members of C.B. 2 had signed a letter on Juneteenth, pledging to do their part to create a more racially and socially just community board district and society.

In their letter, the board members pledged their “commitment to ending the widespread systemic injustice and violence targeting Black people in America [and] to promise…that we will uphold racial justice within Community Board 2.

“We must commit our collective efforts to fostering diverse and inclusive neighborhoods…,” the letter stated.

The board also at that time announced the formation of an Equity Working Group to take on issues of racial and social justice and “to engage in dialogue and examine what we can do better.”

Referring to the board’s support of the women’s shelter, Wice said, “I think this is the way for Community Board 2 and the Village to do right.”

However, Danielle Epstein, who noted her apartment wall abuts the Larchmont, said she has worked in shelter system for 20 years and that this plan has problems.

“To put 90 people in a building that can barely fit 70 is not realistic,” she said.

C.B. 2 member Jeannine Kiely noted the Larchmont Hotel had 66 rooms, and guessed some may have been for two people — implying it would be big enough for the city’s plans.

“It’s already an S.R.O. use,” C.B. 2 Chairperson Carter Booth added. “That’s why they went ahead and chose this facility.”

He was referring to a single-room-occupancy hotel, where residents typically share bathrooms in the hallways.

Six current long-term residents of the building would be allowed to stay under the plan, with their rooms upgraded with kitchenettes and bathrooms.

Meanwhile, Richard Geist, another neighbor, called for “a mediator” to get involved with the community and Project Renewal.

“This is being steam-run right through,” he said of the shelter plan. “We need to slow down. We need to find a mediator and not negotiate with the people that are doing this.”

Susanna Aaron, the chairperson of the Social Services Committee, and fellow board member Keen Berger both noted that when the committee held its discussion on the proposed shelter, 77 people attended the meeting and most of them backed the plan.

“There was a lot of support from the residents on the block and from the wider neighborhood,” Aaron said.

But Frederica Sigel suggested the board’s resolution on the issue should include language basically saying, “take more time.”

“There does seem to be a lot of nervousness,” Sigel said, “so perhaps the resolution should reflect that.”

However, Berger downplayed the comments voiced by attorney Walden and concerned residents at Thursday’s full-board meeting.

“Dozens of people” had spoken in support of the project at the Social Services Committee meeting, she noted.

“Tonight,” she said, “was just other people.”