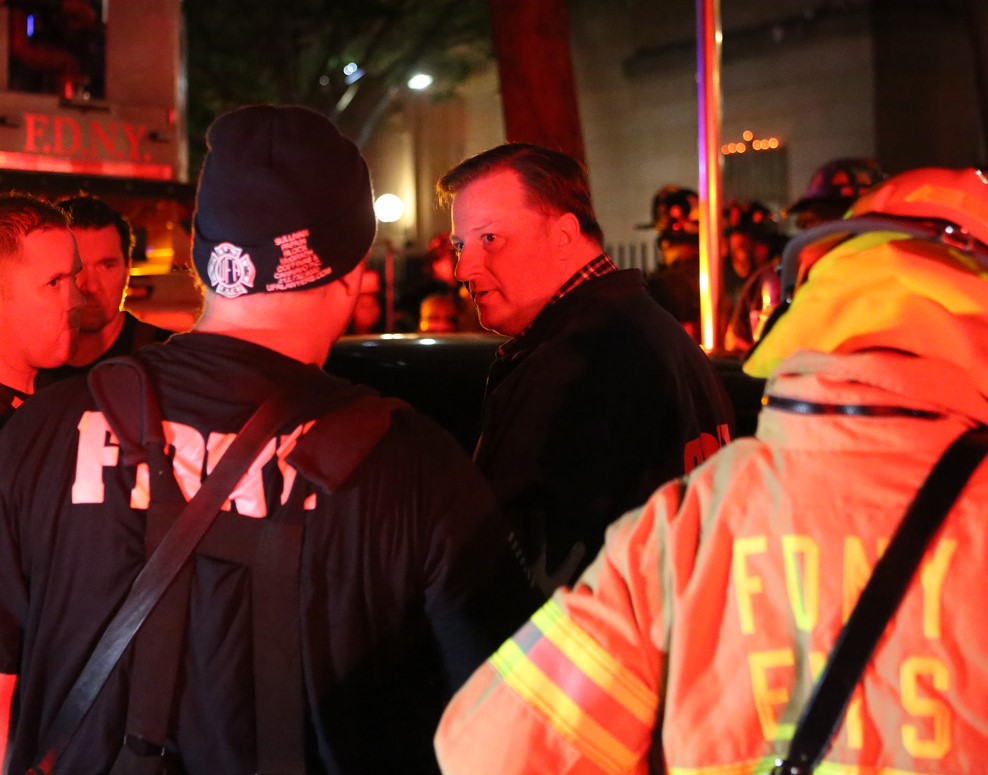 BY LINCOLN ANDERSON | One argument that some make against yielding any ground — or rather street — on Open Restaurants is that the dining sheds are safer and a better use of space than parking, or “car storage,” as some prefer to deride it nowadays.

But, in an interview with The Village Sun, the head of the city’s firefighters union, Andrew Ansbro, painted a sobering view of the roadway sheds and how, in some cases, they can deter firefighters from properly doing their jobs.

The city’s Department of Transportation recently announced that the sheds would be phased out next year. At least until then, though, the contentious structures apparently will continue to flood Downtown’s streets.

Ansbro, the president of the Uniformed Firefighters Association of Greater New York, recently issued a statement warning how the sheds are potentially “endangering” New Yorkers by narrowing certain streets.

In talking to The Village Sun, he expanded on his thoughts about the hotly debated program. He said that neighborhoods like “the Village, Little Italy, Chinatown” are definitely facing safety issues as a result of the pandemic ramshackle structures.

“Absolutely,” he said, “[it’s a safety issue in] any neighborhood with narrow streets. Once you’re down to a one-lane street… . Two-lane streets might be O.K.

“No one expected they’d be up here this long,” he said of the sheds.

He said the worst cases involve narrow streets with sheds on both sides of the roadway — where “you can’t even open the doors” of a fire truck. Also a major problem, he said, are long rows of the structures blocking access to fire hydrants or not allowing even a small gap of space for fire trucks to put out stabilizers that are needed when raising fire ladders or bucket ladders.

“The engine has to be positioned over a fire hydrant,” he explained. “The hose has to go from the back of the truck to the front. Some of these things [sheds] are extra-long, 80 feet.

“Where there’s a [fire truck] ladder, the hydraulic stabilizers require about 6 feet of clearance on the side.” Without the ability to deploy the stabilizers, he said, “The apparatus has the ability to topple over.”

The stabilizers can be extended in the gaps between parked cars, allowing a fire truck to pull in closer to the building than if it was blocked from doing so by a solid wall of sheds. At the very least, the stabilizers need to be deployed on only the truck’s “fire side,” as in, the side nearer to the fire. The drivers can skillfully position the vehicles to deploy the stabilizers at just the right spot.

“A car may be 15 feet long and there’s a gap between cars,” Ansbro explained. “Our chauffers are expert at putting the stabilizers in there. They’re trained where to stop. They only need one-and-a-half feet of space. If it’s a 25-foot-long shed, it shouldn’t be an issue. When you have 150 feet of them with no gaps, it becomes a problem.”

Also, even if the street itself is wide enough to allow the stabilizers — also known as “tormentors” or outriggers — to be deployed, if a truck can’t get in close enough to the building due to the sheds, the vehicle might not be able to raise its ladder high enough to reach the building’s upper floors.

As Ansbro put it, “There were certain windows that were in reach that are no longer in reach. You may have taken an extra floor out [due to the sheds]. It probably will not impede the ability to put the ladder up, but might impede the range of the ladder.”

Obviously, that puts residents living above a certain floor at risk.

In addition, he said of the sheds, “They’re usually wider than a parked car,” which also potentially keeps the fire trucks farther away from buildings.

In short, Ansbro, who is still also an active firefighter, said a thorough Fire Department inspection of all the city’s 12,000-plus sheds scattered throughout the five boroughs must be done to ensure New Yorkers’ safety.

“It was one of those things where they were going to be temporary,” he said of Open Restaurants. “But they need to be looked at, each and every one of them, on how it can affect fire operations. I think each one of these structures needs to be evaluated. I think a structure-by-structure evaluation.”

Obviously, checking out all the sheds for fire safety is a major undertaking. But it’s one that must be done, Ansbro stressed.

Another complicating factor is the outdoor dining program’s impact on parking, which is sometimes making it harder for fire trucks to get through.

“Because of all the parking it’s taking up,” Ansbro said of the sheds, “sometimes you have people parking where they shouldn’t and double-parking, causing problems.”

The dining “yurts” themselves are a fire hazard if they have gas tanks in them, though people would be able to escape quickly, he said.

There is also a concern about the huts impacting snow clearance, the union president said.

“That’s the major reason for the streets to get plowed,” he noted, “so we can get there faster, for Fire, Police and E.M.S. to get through.”

Ansbro said he has brought all these points up in management meetings with the city.

Two of Downtown’s local city councilmembers, at least, Erik Bottcher and Christopher Marte, have stressed that a “one size fits all” Open Restaurants program is not fair to their districts, which have areas with narrow streets and an abundance of bars and restaurants.

However, Downtown’s other councilmember, Carlina Rivera, so far has not responded to The Village Sun’s questions on whether she, too, supports a more neighborhood-sensitive approach to Open Restaurants. Community Board 3, which includes the East Village and Lower East Side, covering much of Rivera’s district, is on record stating its multiple concerns over making Open Restaurants permanent as a one-size-fits-all program.

“All the Downtown community boards don’t like it,” Susan Stetzer, the C.B. 3 district manager, said of Open Restaurants.

Ansbro, for one, is on the same page with Marte, Bottcher and the local community boards on the issue.

“I don’t think it’s prudent to have a blanket acceptance of all the existing structures without a thorough review,” the union chief stressed of the thousands of sheds.

A 21-year New York Fire Department member, in addition to being the union president, Ansbro is a marine engineer assigned to the fireboat 343 based at Gansevoort Peninsula, on the waterfront just west of the Meatpacking District.