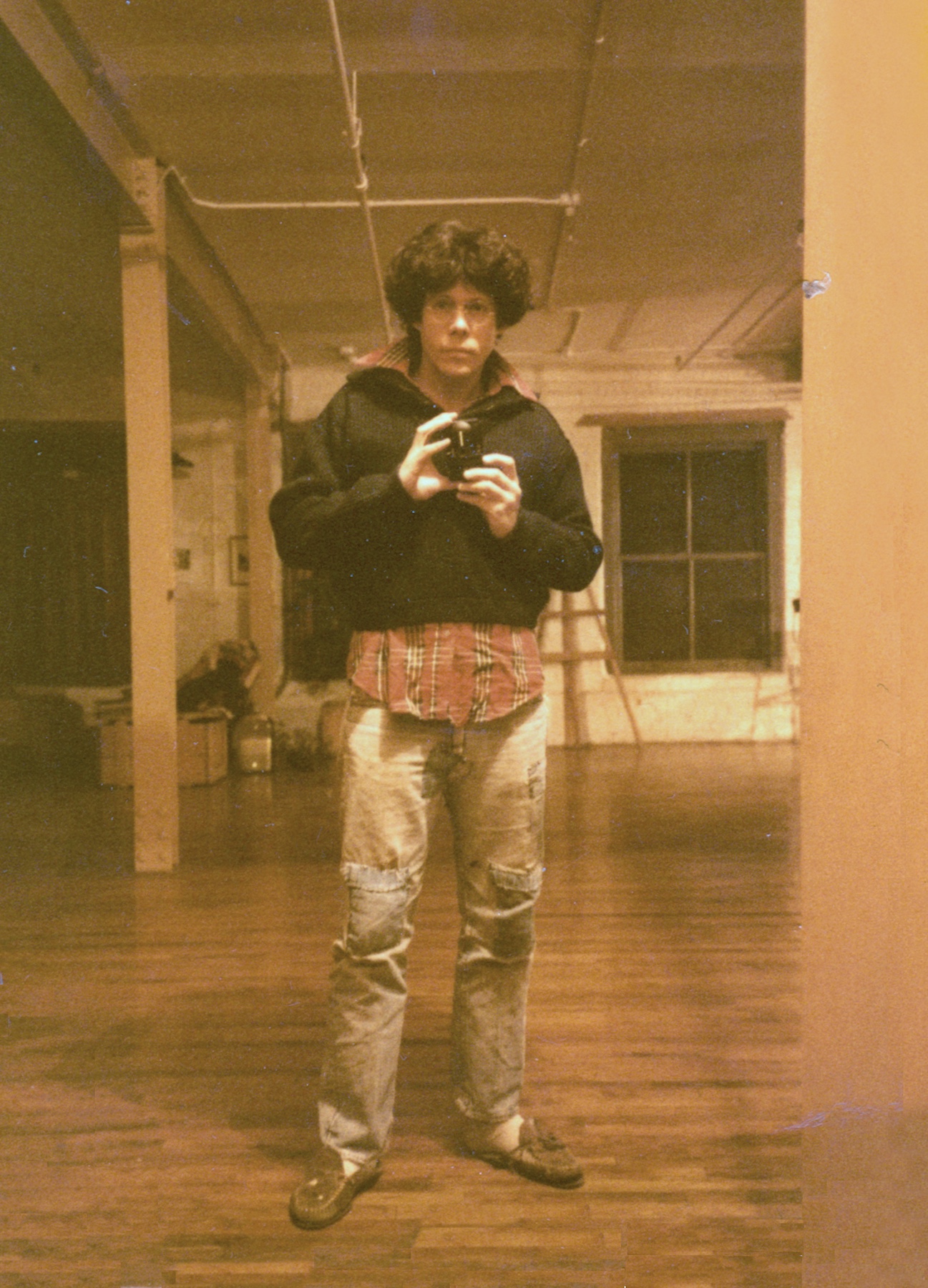 Harry Pincus in his Soho loft before getting married and starting a family. (Courtesy Harry Pincus)

BY HARRY PINCUS | This will be my last New Year’s Eve in Soho. A federal judge has ordered us to sell our loft on Spring Street, and as the last certified artist in my Joint Living Work Quarters for Artists building, I have begun packing my drawings, paintings, etchings and newspaper illustrations, in preparation for an ignominious exile to the hinterlands.

Looking back over all of the ephemera that I generated in nearly 50 years has provided some good laughs, though, and a few tears. My younger self usually began New Year’s Eve with a call to John Wilcock. John is gone now, but he was a “pioneer of the underground press,” according to The New York Times. He began as a Fleet Street journalist and went on to the East Village Other, as well as his own “Other Scenes.” Along the way, John was a cofounder of the Village Voice and Interview.

His book “The Autobiography and Sex Life of Andy Warhol” might explain why Andy seemed so uncomfortable around Wilcock. Yet John could always be counted on to provide an utterly droll recitation of the best party addresses every New Year’s Eve: “Larry Rivers is having something on Fourteenth Street tonight, and then there’s always Two Bond…etc., etc.”

The two of us would concoct a list of more than 30 parties to crash, after I had done my research at Fanelli’s, as well as any art opening I could find. Soho was full of artists in open circumstances back then, and a wrinkled bag with a quart of Miller High Life or a roach would usually suffice as
the price of admission.

This Downtown tradition went back to the artists who ascended the Washington Square Arch and declared a Republic of Greenwich Village back in 1917, and reminded me of the rent parties that my friend Ted Joans used to run out of his flat beneath the clock on Astor Place. Weegee was there to document it all, including a morose James Dean, who had come to the Village for his “Ted-ucation” at the old Cafe Bizarre.

I don’t recall getting kicked out of a party until a few weeks after the election of Ronald Reagan, when a bouncer informed me that being an artist wasn’t good enough for admission to the cotillion of preppies in tuxes and pink ball gowns who were performing some sort of ritual beneath black and white balloons. It looked like the Republican National Convention in there, and my, how Soho had changed!

I was often accompanied on my New Year’s Eve ramblings by B J Perichon, an inspired soul who called himself Baby Jery, and lived in a stable at 44th Street and Tenth Avenue with six parrots and a cockatoo. Jery went down to Washington on his own dime to patent what could have been the first version of the the Rainbow Tribe flag, which represented the unity of humanity. He had a magical hand, and could accomplish any measure of draftsmanship with his brush, as long as a stern art director was there to keep him in tow.

“Leave him to his own devices,” said another illustrator, “and Jery will always draw naked Indians with peace signs.”

Sure enough, the art director of the Week In Review at the Times dispatched me, posthaste, over to the stable to see about Baby Jery, who was late for the deadline with an assignment called “The Blind Leading the Blind.” I rang and rang on the bell and bashed on the old blue door across the street from the Hess gas station, but no Jery. I finally had to give up, and sadly trudge back to The New York Times, where my friend was holding court in the art director’s office, with his last minute rendition of “The Blind Leading the Blind.” All of the staff and all of the illustrators were assembled before Jery’s masterpiece, and their jaws were hanging open. He had drawn a line of naked Indians with peace signs — and their eyes plucked out!

Jery was a driving force on New Year’s Eve, though, and even the dregs of the evening didn’t stifle his ardor for yet another party. I recall standing on Canal Street with Jery, as the sun was beginning to come up, and one more address was left on our list. I couldn’t imagine a party that might still be going on, but Jery decided to climb up the building’s fire escape, and break in through the window. After a few tense moments, he emerged triumphant at the front door, jubilantly waving us in.

On another such occasion, there were perhaps a half dozen of us with just one more address, in the early hours of the morning. I thought it was far too late to invade the old factory building on forlorn Duane Street, in the new neighborhood called Tribeca, but Jery insisted that he heard the beat of a distant drummer, and proceeded to lead an exploratory expedition up the old staircase. With each groaning landing, the music grew louder, and we became bolder. Finally, on the top floor, the music was blaring, and our tiny expeditionary force felt emboldened to pull open the factory door. Indeed, the party was still going on, to an extent, though the massive loft was mostly vacant, save for what looked like hundreds of empty beer cans. There was a bed in the middle of the room, and no one to greet us, as the only remaining guests were avidly fornicating on the bed.

Baby Jery passed away this year, at a good old age. He had lost his studio, and experienced long-term homelessness, but kept on for more than 40 years with a graphic novel that he called “A Patriot’s Guide to Silence.” His struggles are perhaps fitting for an artist as, after all, we are not intended to be wealthy owners of anything, other than our ideas, and our passions.

Jery was not the only friend I lost this year. Our son Isaac walked in as I was reacting to the news of the sudden death of another dear friend, an attorney in London. My son had never seen his father cry, but tears flow freely with the loss of true friendship, and I suppose that’s to be expected when one reaches the advanced age of 70.

All of those parties were the yin to the the yang of hard work. We came to Soho to do Art, not real estate, but that’s all changed now. After years of litigation, a federal judge has ordered me to sell our legal apartment, so that the absentee owners next door can sell theirs for an immense profit.

“Things change,” said a judge in State Supreme Court, and I suppose the federal judge who ruled that we must sell reckoned that the two apartments will be combined into something splendid, for some fortunate soul.

I don’t know where we will go, but memories are easy enough to pack, and this will be our last New Year’s Eve in Soho.

Should auld acquaintance be forgot,
and never brought to mind?
We’ll drink a cup of kindness, yet,
For the sake of auld lang syne.