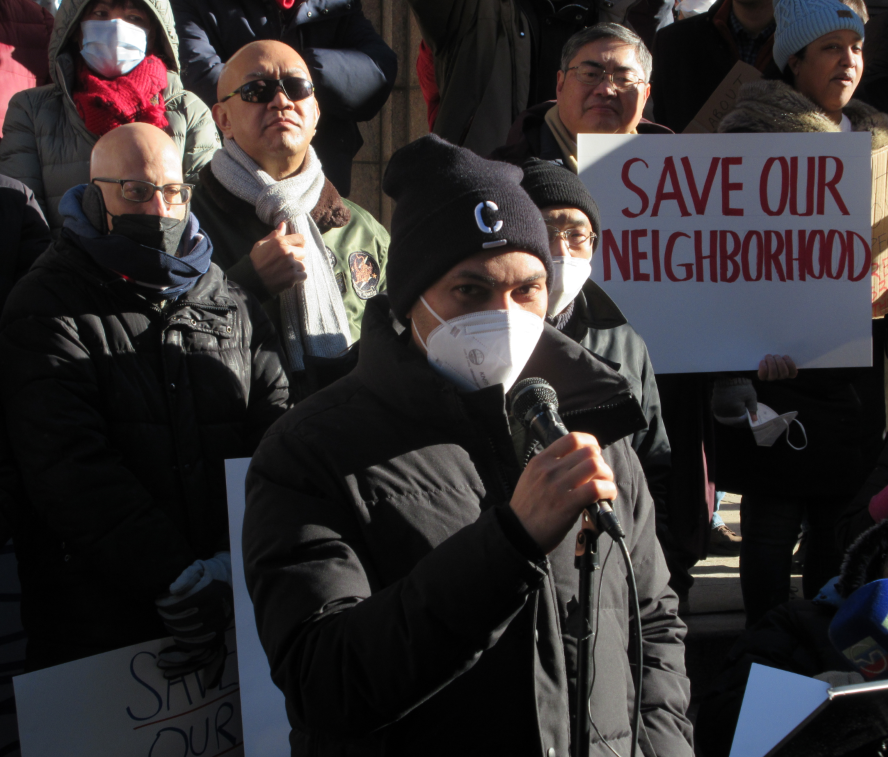 Speaking at Sunday's protest outside The Tombs, Coss Marte, who has been through the system, said building more jails is not the answer. (Photo by Dashiell Allen)

BY DASHIELL ALLEN | The protesters’ demands are pretty simple: No new jails!

It’s actually the same thing that Eric Adams said almost a year ago.

It’s what a group of more than 100 neighbors, activists and community leaders chanted in almost 30-degree weather Sunday outside the Manhattan Detention Complex, known locally as “The Tombs,” at the corner of Centre and White Streets in Chinatown.

With only two weeks to go before the Department of Corrections begins to “dismantle” — as in, demolish — the existing building to make way for a new 40-story tall “mega-jail,” the stakes have never been higher.

The plan, initially put forth by the de Blasio administration and fervently supported by former Councilmember Margaret Chin, calls for replacing Rikers Island with a “borough-based” jail network across the city. From Day One in 2018, the scheme has been met with steep criticism from Lower Manhattan’s Chinatown community.

The new jail is slated to be up and running by 2027, at which point Rikers would close. In the meantime, however, The Tombs is empty, with all prisoners moved to the East River island, which is undergoing a humanitarian crisis.

The protesters argue that building a new jail would hurt neighboring small businesses and residents in Chinatown — one of the city’s communities hardest hit by COVID-19. They also charge that the construction would benefit big developers, who would turn a profit on the job.

Instead the opponents would prefer to see the existing jail complex renovated. Many protesters also expressed interest in reducing the city’s entire incarcerated population.

“Our city is at a crossroads, our community is on the fork of the road. Which side do we choose to walk to?” said Christopher Marte, the new District 1 Councilmember. “A side set by the past administration, who chose incarceration, a false sense of criminal justice reform? That road has $ 11 billion that the city wants to invest — for what? For who? Developers and the profiteering criminal justice system.

“We all came out here today because we believe in change,” Marte continued. “We believe in a new direction. We believe in investing in the community, in housing, in healthcare, to making sure that we end mass incarceration in our city.

“When we all talk about Asian hate crime, we never talk about the systemic nature of racism,” he said. “This mega-jail represents that systemic racism, where we invest to have people on Rikers Island but we don’t invest to make sure they can thrive in the communities that need them there.”

In 2018, Marte co-founded the organization Neighbors United Below Canal Street (NUBC), which filed a lawsuit against the city, arguing its environmental impact assessment was flawed, given that E.I.S. was written before a final jail design was decided upon.

The jail’s site is, in fact, on top of the historic Collect Pond, which, prior to European colonization when the land was occupied by the Lenape people, was a “sixty-foot deep pool fed by an underground spring,” according to the Parks Department.

NUBC won the initial court ruling on the case but then lost on appeal at the Appellate Division, whose decision was, in turn, upheld by the state’s highest court, the Court of Appeals, which ruled in the city’s favor this past November.

While NUBC hasn’t ruled out further legal action, they’re hoping that Mayor Eric Adams will simply pull the plug on the whole project.

Back in April 2021, Adams, standing next to Marte, said emphatically, “No new jails, no building up a jail in this location. We can do a better job. And I know it’s possible to solve the problems we are facing in incarceration without the destruction of communities.”

Lee is holding Adams to his words — but the mayor has yet to speak publicly on the jail plan, and it appears to be proceeding on schedule.

The Village Sun did not receive a response to a request for comment from the Mayor’s Office.

“In two weeks, according to the city’s plan, the bulldozers are gonna come,” Marte said. “We have two weeks to do the right thing.”

District Leader Victoria Lee, the founder of the nonprofit Welcome To Chinatown, said the neighborhood has been hammered and that the mega-jail would just add insult to injury.

“Chinatown is already a marginalized community, impacted by disproportionate neglect,” she said. “We have not recovered from the impact of September 11. And we are still reeling from the impacts of COVID-19. Tell me why the city decides to tout Chinatown as a cultural hub when it’s convenient, but they are literally getting ready to bulldoze through our community.”

Tammy Meltzer, chairperson of Community Board 1, voiced disgust with the lack of transparency and chance for public input about the plan.

“Every answer that we got was, ‘We’ll get back to you,'” she said. “I’m still waiting three years later for basic information that we asked for. Silencing the community when we’re talking about public funds and billions of dollars…is not good. I don’t care what they have to say at the moment. Where is the social justice reform we were promised?”

Two community members — former Councilmember Kathryn Freed and Justin Yu, the president of the Chinese Consolidated Benevolent Association — both remembered protesting when The Tombs was built 35 years ago.

“I don’t need institutional memory, I am one,” said Freed. “In the ’70s I lived two blocks from here… . I helped demonstrate against the original jail that we were all fighting against.

“The idea of putting a 40-story building in this area, which is already so dense, which already needs more services, is insane. Rikers is a disaster, but you don’t change the disaster by spreading it around.”

Speaking on behalf of the Coalition to Protect Chinatown and The Lower East Side, Nelson Mar connected the building of a new mega-jail in Chinatown to the larger themes of displacement.

“In an attempt to buy off support from the community, the city is throwing off $35 million to the Museum of Chinese in America, when that money, we all know, would be more useful for small businesses struggling to survive,” he said. “Without those small businesses, Chinatown would simply be [like] any other neighborhood.

“The jail is but one piece of that displacement puzzle, and solving the jail alone will not stop it,” he said. “We need to pass the Chinatown Working Group plan.”

Perhaps nobody at the protest was better suited to speak about the carceral system than Coss Marte. Christopher Marte’s brother, he served time at both The Tombs and Rikers Island, before founding CONBODY, a Lower East Side fitness studio that hires formerly incarcerated people.

“I’ve lived in this facility here, and it’s a bad, bad place,” he said. “We do not need a new jail. Some of the funds should go into renovating the cells. Then I believe we need an alternative to incarceration, and I feel like that’s what I built with my company. I’ve hired over 50 people coming out of the prison system, and we have a zero recidivism rate. We do not need new jails. We need alternatives to incarceration. We need programs. We need housing.”

“I don’t want to hear that Chinatown is NIMBY,” said Jan Lee, weary of some who might frame the protesters as opposing development in their “backyard.” “We’ve had jails here for 100 years. We have constantly been talking to people who are looking for alternatives to incarceration, and that’s what we need to head towards.”

Councilmember Marte told The Village Sun that he’s met with Adams’s office in recent days, and that the new administration is “aware of the history.”

“There’s a lot of people who don’t know what we’ve been doing for the past three years,” he said. “And so we reached out to his office, had a meeting and I gave them the background of what’s been happening and what the community wants to see.”