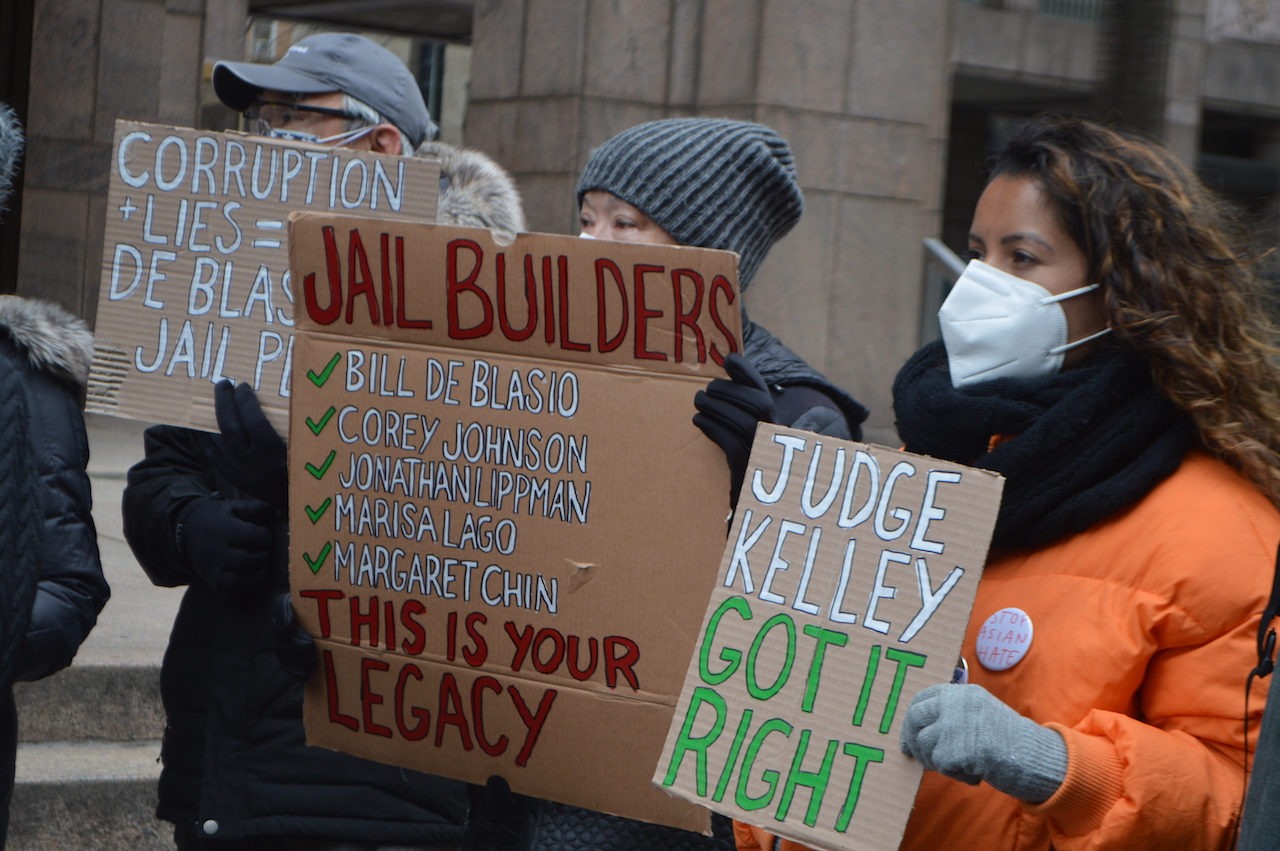 At an April 2 rally outside The Tombs, protesters slammed an appellate court's ruling on the Chinatown mega-jail plan, which overturned a decision by State Supreme Court Justice John Kelley. (Photo by Caitlin Kelmar)

BY THE VILLAGE SUN | In a setback for opponents of the city’s Chinatown mega-jail plan, an appellate court has reversed a lower court’s decision against the project.

On March 30, the Appellate Court First Division ruled that the scoping for the scheme was not “arbitrary and capricious,” as a New York Supreme Court justice had earlier ruled in a so-called Article 78 lawsuit. An Article 78 is a lawsuit that challenges a government action.

City Hall’s plan is to close the much-maligned jail complex on Rikers Island and build jails in the boroughs, except for Staten Island. However, the plan’s critics say that Rikers should simply be fixed up and that residential communities should not be burdened with new jails and the major construction required to create them.

However, the appellate court said that switching the planned Lower Manhattan jail’s construction site from 80 Centre St. to 124-125 White St. did not require a new scoping process, as the plaintiffs argued, since both sites were initially considered in the project’s planning process.

“The Centre Street site was identified during the scoping process, but the proposed site was changed to White Street after further review, including consideration of public comments received during the process,” the appellate court’s decision states. “The applicable regulations allow significant post-scoping changes to a project… . Under the particular circumstances of this case, the scoping process did not have to be redone.”

Members of Neighbors United Below Canal, which filed the lawsuit against Mayor de Blasio, slammed the reversal. The group said that “all possible options, including appealing to a higher court, are being considered.”

“I’m greatly disappointed by this court’s decision, which was based on lies put forth by the city,” Jan Lee, co-founder of NUBC, said. “This administration, led by Bill de Blasio and [City Council Speaker] Corey Johnson, continues to hurt our community by underfunding social services and omitting us from beneficial 0 percent interest loans.

“Instead of creating opportunities and environments that prioritize health and wellness, as we struggle to emerge from the pandemic,” Lee said, “the city chooses instead to dangerously bulldoze ahead with the violent demolition of the Tombs jail and to embark on years-long multibillion-dollar jail buildings that will be the final nail in the coffin for a community ravaged by xenophobia, empty storefronts and trauma.”

Christopher Marte, a candidate for City Council in the First District, is also a co-founder of NUBC.

“Systemic racism isn’t just a passive idea,” he said, “it’s an active harm that we have to fight against every single day until we have a government and judicial system that believes in true equality and justice. Mayor de Blasio cannot denounce anti-Asian violence while spending public dollars to fight our suit against his plan for a new jail in Chinatown. The city continues to ignore our voices.

“This plan is violence against all people of color,” Marte declared. “It creates new cells to lock up black and brown people, and a new economic and health burden for Chinatown to bear. We are adamant in our fight against this jail, and we stand united with all people who are harmed by mass incarceration and systemic oppression.”