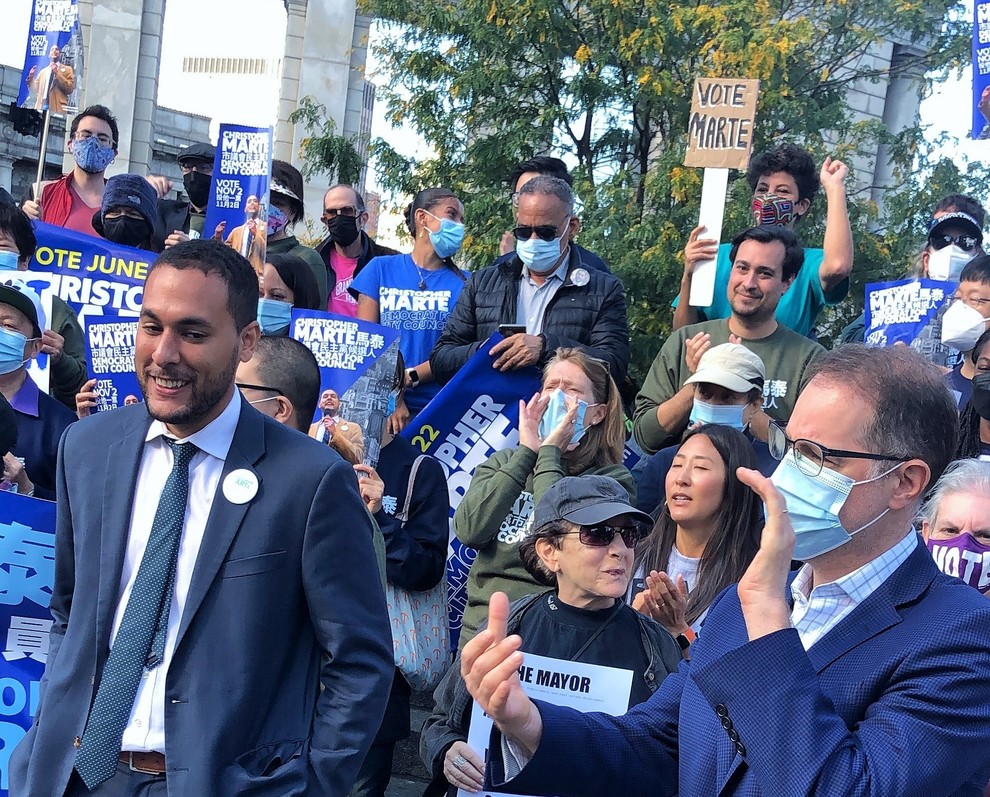 BY DASHIELL ALLEN | Christopher Marte and his supporters took to the streets Sunday morning for a kickoff rally and “barnstorming” ahead of the Nov. 2 general election.

While Marte enjoyed a landslide victory in the June 22 primary, with support from all local district leaders and Democratic political clubs, he and his supporters are not taking anything for granted.

“When we’ve been talking to voters in the past few weeks, we’ve realized that while a lot of people are excited about our win in the primary, a lot of people don’t know that they have to vote again in the general,” said Jennifer Chiao, a campaign organizer and member of Youth Against Displacement.

“We need to deliver Chris a massive mandate on November 2nd,” he said. “Chris Marte has earned that. He is ready to step up on January 1st to lead for a community that faces myriad challenges.”

Without delving into specifics, Levine referenced a wide variety of issues in his speech: “Threats to tenants ahead of what could be one of the biggest avalanches of evictions in city history…  threats to small businesses that have been pummeled Downtown during this pandemic… threats to our coastline amid climate change. Chris is ready to stand up for a plan that will be racially judged and environmentally sensitive,” he said, in implicit reference to the developer-driven Soho/Noho rezoning and the contentious East River Coastal Resiliency plan.

“I am ready to stand with you, Chris Marte, you have earned it, you are ready for this,” Levine said.

‘We’re gonna have a borough president that listens and understands. He’s gonna be my tag-team partner in the ring.’

“We’re gonna have a borough president that listens and understands,” Marte said. “He’s gonna be my tag-team partner in the ring.”

Marte did not mince words when he addressed the crowd.

“Enough is enough,” he declared. “I am so…tired of people telling us how to live in the neighborhood that we built.

“So when we have these developers like Stephen Ross, who spent hundreds of thousands of dollars electing politicians who are gonna listen to him and his friends, we tell them to [get lost].”

Organizers and activists across Lower Manhattan are currently waging a staunch opposition to development projects, such as the Howard Hughes Corporation’s proposed high-rise tower at 250 Water Street. The Hughes project would be built on top of a toxic superfund site. Under the developer’s plan, around 30 percent of its units would be affordable housing under the city’s Mandatory Inclusionary Housing program.

“We are united and if we stay united, we will have a voice in this town that hasn’t been heard for a long, long time,” said Richard Corman, president of Downtown Independent Democrats.

“The connection between the voters and the elected officials is in deep disrepair,” she said.  “The city has been warped and corrupted in ways that are not easy to repair. There’s a severe disconnect with how people want their neighborhoods to look — affordable, creative, accessible, with flourishing small businesses and integrated public schools.”

Hellstrom first met Marte in 2013 at the beginnings of his activist days, when he attended a meeting at the Elizabeth Street Garden to save the threatened green space.

“He walked in through those gates,” she recalled, “and he said four simple words. He said, ‘How can I help?'”

What’s special about Marte, according to many who were in attendance, is his commitment to listening and engaging with everyone in the room.

“He attends every local meeting, and listens to not just local leaders but local residents,” said Kenny Wind, the treasurer of the Grand Street Democrats.

There was strong energy on the crisp fall morning as the rally ended and neighbors, activists and organizers fanned out across Lower Manhattan to campaign for their candidate, Christopher Marte.