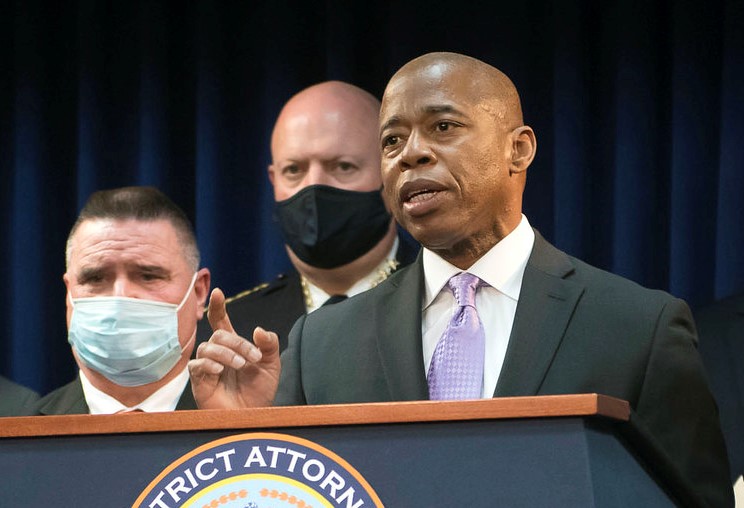 Mayor Eric Adams announced he has vetoed a bill that would have hit nonartist residents in JLWQA lofts with steep penalties. (Photo by Ed Reed / Mayor's Office of Photography)

BY LINCOLN ANDERSON | Updated Jan. 16, 3:30 p.m.: Mayor Eric Adams in a statement late Friday afternoon reitearated his support for the Soho/Noho upzoning. But he announced that he has vetoed former Councilmember Margaret Chin’s bill — at least for now — to slap nonartist residents in JLWQA units with heavy fines.

Adams said nixing Chin’s bill (Intro 2443A) now gives him and the City Council some more time to “improve” it with “right-sized” fines and also to “clarify” its enforcement mechanisms.

“It is a top priority of the Adams administration to find ways that ensure all neighborhoods are helping solve our city’s housing crisis, particularly those that are centrally located and well-resourced,” the mayor said. “That is why I have proudly supported the Soho/Noho rezoning for more than a year, and it is why I am proud the rezoning has become law.

“There was a small piece of legislation that passed at the same time as the rezoning that addresses recording requirements and fines related to Joint Living Work Quarters for Artists (JLWQA). We’ve been hearing concerns about that specific legislation, and are going to make sure that we can productively work together to improve it over the coming months. In order to do that together, today I will veto that legislation to give us time to continue to work on it with the City Council.

“We are still committed to increasing options for existing JLWQA owners by providing a legal pathway to residential use for nonartists in the neighborhood should they elect to legalize or sell, and to make sure windfall profits of those sales get invested back into the artistic legacy for Soho and Noho in perpetuity via the Soho/Noho Arts Fund,” Adams said. “But we will take a little more time to make sure we are right-sizing any fines associated with this process and clarifying the associated enforcement mechanisms going forward.

“We are crystal clear in our 100 percent support of the Soho/Noho rezoning,” he said. “We look forward to working with the City Council to build on this important legacy and make sure all neighborhoods are doing their part for fair housing and more equitable communities.

Chin abruptly introduced her 11th-hour bill in November, and Soho and Noho residents were immediately up in arms over it, calling it retroactive and “punitive.” As The Village Sun first reported, a new group, the Coalition for Fairness in Soho and Noho, recently started fundraising for a lawsuit to fight both the Soho/Noho rezoning and Chin’s JLWQA fines bill.

“This veto is a step forward for supporting the arts in Soho and Noho and creating an accessible housing stock,” Marte said. “I commend Mayor Adams’s leadership on supporting new legislation creating a JLWQA-type program that better meets the housing needs of our city and a pathway for nonconforming occupants to live legally. Supporting the arts in Soho and Noho can’t come through building codes alone, but through funded mandates and programming, affordable housing and community space.

“If passed, this legislation would have arbitrarily and excessively penalized long-term, nonconforming residents for living in JLWQA residences,” Marte said. “With preexisting fines and no support for legalization, this bill served no one. While there are still people to whom JLWQA units provide protection to live and create [art] in one space, there are an increasing majority of occupants in these apartments to whom this program is not relevant.

“The program has gone defunct for a number of reasons, including an outdated state definition of being a qualified artist and the [New York City] Department of Cultural Affairs not having the capacity to grant new certifications or track certified artists throughout past decades.

“Our office, the mayor, tenants and artists share these goals of legalization and expanded support for artists, and vetoing this legislation is the first step to achieving them,” the councilmember said. “We must overhaul the JLWQA program to reflect the current needs of the local community, and to ensure that both artists and nonconforming tenants are supported, not penalized, in their own efforts to stay in these neighborhoods.

“While there is more to do for residents and artists of Soho and Noho, thank you to everyone who made this happen, and thank you Mayor Adams for listening to New Yorkers, and working to support a path forward.”

“This is very welcome news,” the preservationist told The Village Sun. “This sloppily written and shoddily reviewed bill would have made life next to impossible for hundreds of people, and served only to penalize and harass longtime residents. The more than 40 city councilmembers who voted for it — including all three local councilmembers — should be ashamed of themselves.

“It’s good to see that Mayor Adams saw the light and how deeply contrary to the public good this wrongheaded bill was,” Berman said. “Congratulations and deep gratitude go to new Councilmember Christopher Marte, the Coalition for Fairness in Soho and Noho, all the allied community groups and the thousands of New Yorkers who wrote and tweeted about this.”

A relieved Sean Sweeney, the director of the Soho Alliance, also cheered the development.

“For the first time in more than eight years,” he said, “a mayor has vetoed a Council bill, indicating how onerous and vindictive Margaret Chin’s punitive legislation on her own constituents was.

“We thank Mayor Eric Adams, Councilmember Christopher Marte and the hundreds and hundreds of activists, not only in Soho and Noho but citywide and beyond, who rallied to our cause and who lobbied, sending hundreds of e-mails [to the Mayor’s Office and deputy mayors] to get this punitive legislation nixed.”

Sweeney took a dig at Chin.

“On her way out the office,” he said, “and in the final minutes of 12 feckless years in office, Chin, who was repeatedly rejected in election after election by Soho and Noho voters, thought she had the last laugh.

In an e-mail after Adams’s announcement, the Soho Alliance said Chin’s bill backfired, in that many from the nonartists community are now more engaged with the rest of the area’s residents who have been fighting against the rezoning.

“Instead of a curse, Chin’s legislation has actually been a blessing to Soho/Noho,” the alliance’s e-mail said. “It has invigorated an entire demographic that previously had not been involved in community activism. Networks have been established that never existed. It has shown the power of an organized community.

“We believe the rezoning is fundamentally flawed, pushed through in the last days of a failed mayor, completely ignoring the six months of community input during the 2019 Envision Soho/Noho process and a gift to de Blasio’s developer contributors.

“We are going full-steam ahead with our lawsuit to have the courts address the serious defects that the prior Council ignored.”