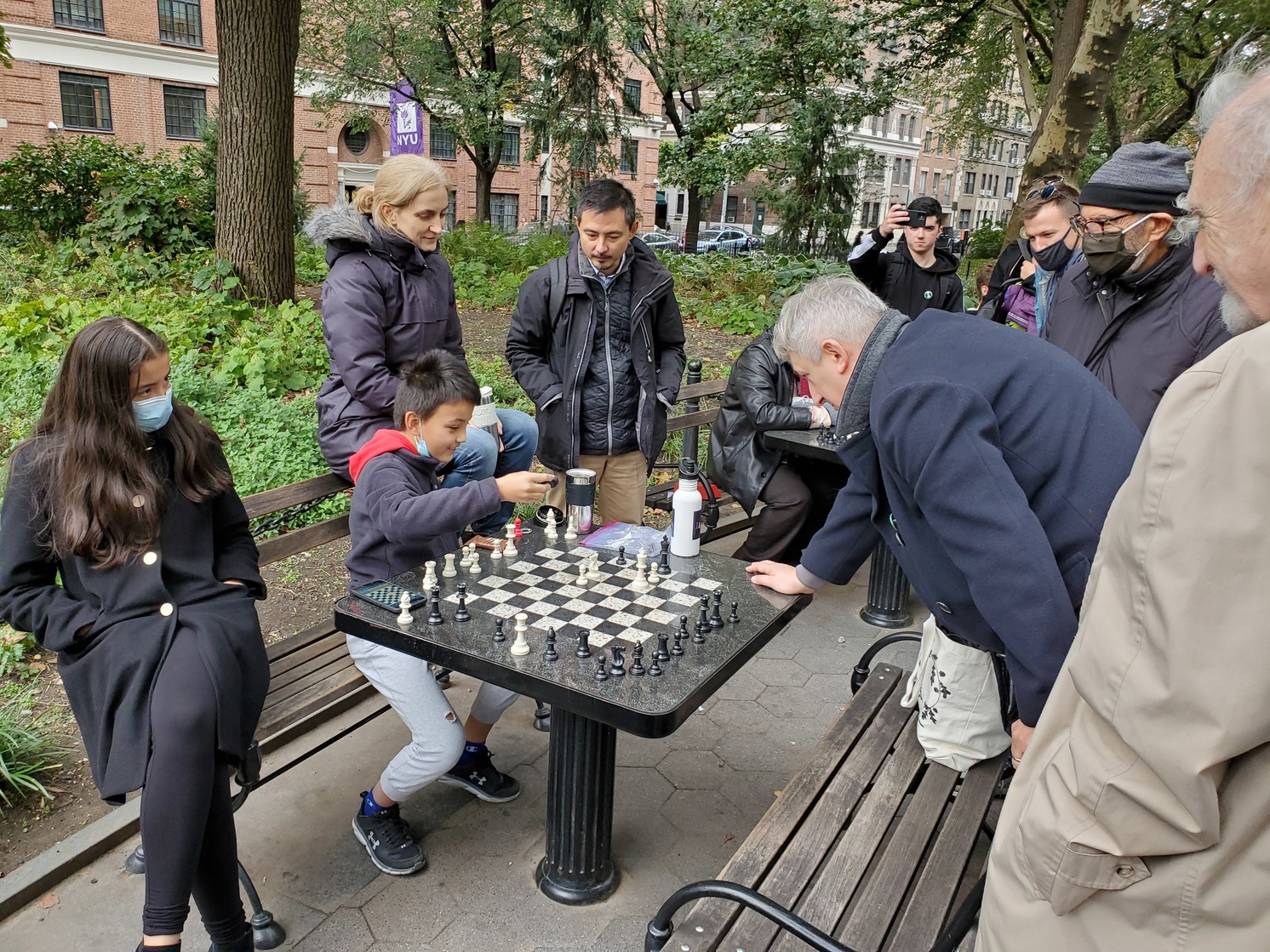 BY LINCOLN ANDERSON | If you think watching a chess tournament is even less exciting than watching golf or the yule log on TV, then you must have missed Maxim Dlugy recently playing a “chess simul” in Washington Square Park.

On Oct. 24, Dlugy, a grand master, simultaneously competed against roughly two-dozen players at the chess tables in the southwest corner of Washington Square Park.

Dlugy was a flurry of concentrated action. He would quickly stride from table to table, bending over and quickly surveying each board. Sometimes he would make a move immediately. Other times, he would think for a bit — maybe a minute — before moving a piece and rushing off to the next table.

His competitors had snagged spots to joust against him by signing up on the W.S.A. Web site. The first ones to sign up got to play. They ranged from veteran chess players to local child prodigies to chess sharps who can be found in the park on a regular basis.

In the end, Dlugy beat everyone except for two players who forced him to concede a draw. Anthony Kozikowski, 40, was one of them.

“I offered him a draw three times and he turned it down,” Kozikowski said. “Then he offered me a draw.

“I was playing a standard London,” he reflected of his opening move. “I gambled a pawn. He was playing the Jobava London. And then I regained a pawn.”

Kozikowski was glad to accept the draw, opting not to try to fight on for a win.

“I had to be a lot better [than him] for him to offer a draw,” he explained. “For a grand master to offer someone a draw, you have to be winning pretty significantly. My respect for Maxim was just so high. I was happy to have the bird in the hand.”

The prize for winning a draw is a month’s membership at the legendary Marshall Chess Club, at 23 W. 10th St. A teenage Bobby Fischer famously played his “Game of the Century” there in 1956.

Ironically, this spring Kozikowski was banned from the Village chess club for five years after leading an anti-vax protest against it when it reopened.

Asked if, after playing the grand master to a draw, he will now try to rejoin the club, he said, “I’ll talk to them.”

Also lasting to a draw with Dlugy was young Connor Liao, 9, who lives in Greenwich Village. Helping him were his dad, Matthew, a New York University professor of philosophy and bioethics, and sister, Caitlin, 12. They didn’t help him by giving him tips, but simply by also playing against Dlugy. As they explained, a strategy in a chess simul is to try to wear down the grand master by keeping as many games going for as long as possible.

After reaching a draw, Connor and Dlugy played out the board at the end, and after a flurry of moves, were each left with one piece each, their kings.

“I actually missed one move,” the grand master reflected, adding approvingly of the young whiz, “he didn’t buckle under pressure.”

Caitlin said she actually has not watched any episodes of “The Queen’s Gambit,” the smash-hit miniseries about an orphan girl who becomes a chess prodigy.

“There are adult themes,” her dad explained.

A few participants were pleased just to have reached the benchmark of 60 moves with Dlugy, including Surfi from Jamaica, Queens.

Vowing to the grand master that he would not go down without a fight, Surfi thundered, “I’m a Bengal tiger!” At one point he even had Dlugy in check.

“My first check of a grand master!” he gushed.

“I got him thinking for a while,” said Alan Stolyarov, 23, from Hoboken, adding that Dlugy’s playing style is “very creative.”

The chess simul over for him, Stolyarov sat waiting at his table for another match with any takers. Meanwhile, Kozkikowski soon was locking horns with someone in another game.

Anka Itskovich, who, like Dlugy, was born in Russia, asked him a few times, as he whisked across the chess plaza to his various opponents’ tables, why there weren’t more females playing in the tournament. Also, she wanted to know what is being done, in general, to address the gender imbalance in chess and get more young girls playing the classic game.

Dlugy pointed to Connor’s sister, Caitlin, adding, “I think there were girls — three or four were playing. Things are happening.”

The grand master, who runs an Upper West Side chess academy, added, “I have a lot of girls in my program.”

Erika Sumner, a board member of the Washington Square Association, organized the event.

“I’m delighted,” she said afterward. “I think it was a huge success. We had an excellent group of players and everyone seemed pretty enthusiastic. I hope we do it again. Maxim was excellent. He’s known to be a blitz player.”

As the chess simul wound down and ended, the chess tables began to fill up with park regulars, like Ted Lopez, who said he is close to 60.

“I only charge like $5,” he said of the fee to play against him. “I give lessons. I don’t gamble, it takes the fun out of the game.”

A guy named Johnny sitting at another table was filling a brown rolling paper with weed. In need of an opponent, he called out, “We got a lot of grand mastuhs around heeyah!”