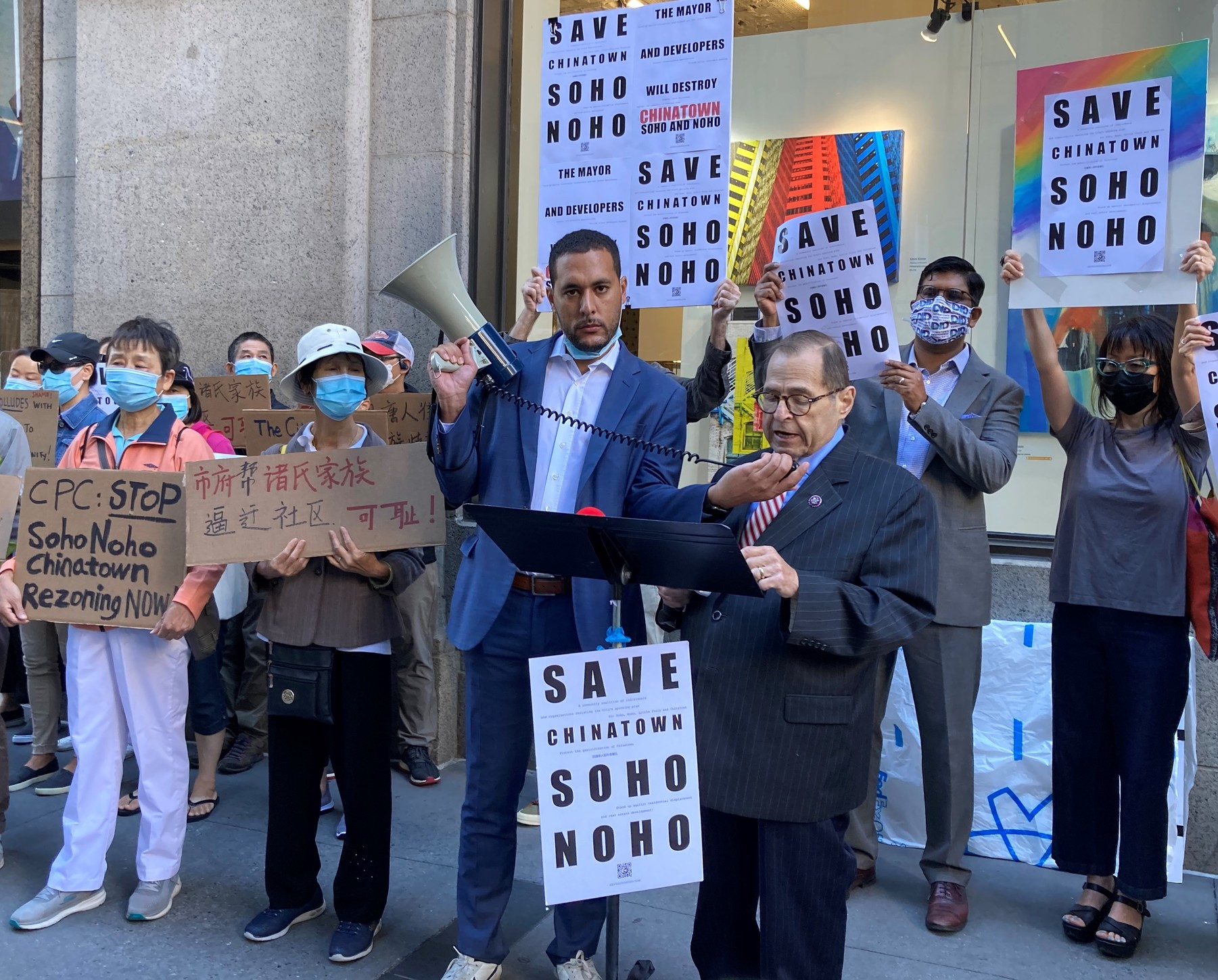 Christopher Marte, then the councilmember-elect for District 1, and Congressmember Jerrold Nadler spoke out against the Soho/Noho rezoning last September.

BY LINCOLN ANDERSON | As Yogi Berra once said, “It ain’t over till it’s over.”

A new ad hoc group has come together to challenge the Soho/Noho upzoning and is currently raising funds to mount a lawsuit.

The full City Council approved the rezoning on Dec. 15 at its final stated meeting of 2021.

Called the Coalition for Fairness in Soho and Noho, the new group’s GoFundMe Campaign, after just one month, had rapidly raised more than $136,225 toward its goal of $250,000 as of Sunday evening. This is listed as only “phase one” of the fundraising effort.

The group intends to retain veteran attorney Jack Lester, who has previously represented the Soho Alliance in lawsuits. Last May, the Soho Alliance sued to block the Soho/Noho rezoning. but ultimately did not prevail in the courts. The new coalition felt it would be more effective to wait until after the rezoning was passed into law to attack it on legal grounds.

The coalition is especially opposed to what they see as new “punitive” and unfair provisions that would hit nonartist residents.

First, there is a “flip tax” in the rezoning that imposes a $100-per-square-foot penalty for a homeowner to convert to straight residential use from Joint Live/Work Quarters for Artists (J.L.W.Q.A.). It would thus cost a non-certified-artist owner of a 2,500-square-foot residence $250,000 to legalize his or her home. The same tax would apply if an artist owner of a J.L.W.Q.A. unit sold it to a nonarist. On top of that, professional fees and expenses to bring currently manufacturing-zoned buildings up to residential code requirements could raise the cost to $500,000.

In addition, coalition members are outraged over a last-minute regulation change introduced in November by former Councilmember Margart Chin to make nonartist residency of J.L.W.Q.A. units a “major violation” under the Department of Buildings, accompanied by massive fines. The first violation starts at $15,000 minimum. Subsequent violations are $25,000 minimum, with monthly penalties of $1,000 until the flip tax is paid or the residents leave. There was zero discussion of this bill in the Council and the term-limited Chin was its only sponsor.

J.L.W.Q.A. was originally created to legalize artist residents who moved into abandonned buildings in Soho and Noho, which had a manufacturing zoning. Today, it is the most common type of residential use in Soho/Noho, with at least 1,636 units according to the Department of City Planning.

Sunday evening, The Village Sun spoke with a member of the new coalition about their concerns and why they feel have no choice but to sue the city.

The resident, who lives in Noho, spoke on condition of anonymity. He said that many of the coalition members are families that moved to Soho and Noho simply looking for “more space.” Yes, they knew that the two enclaves’ J.L.W.Q.A. zoning restricted residency to city-certified artists. Yet they also were aware that the city had not enforced this provision for decades, effectively making it little more than a “dead-letter law.” Meanwhile, these residents poured money into their buildings to fix them up, even as the neighborhoods around them became increasingly desirable.

The coalition members are a mix of home owners and rent-stabilized tenants.

Above all, the coalition members feel the rezoning ultimately will serve two main purposes: promoting commercial use and development and pushing out current residents.

Also standing to benefit is New York University, among others. In touting modifications they had made to the rezoning, Chin and Councilmember Carlina Rivera on Dec. 9 claimed that university use, including dorms, would not be allowed in the Soho/Noho rezoning area. However, at the last minute this modification apparently was itself modified, and dorm use, frats and sororities are now allowed again, although other types of college and university facilities are not.

“The Potential Modifications would not allow colleges or universities…to locate within the SNX [Soho/Noho Mixed-Use District], including professional schools; however, business colleges or trade schools, college or school student dormitories, and fraternity or sorority student houses would be permitted.”

The member stressed that the coaliton does, in fact, support more affordable housing and racial and socioeconomic diversity in Soho and Noho. In other words, not more Nike Stores, but instead more residents who are nurses, emergency responders, school teachers.

Opponents have scoffed that former Mayor de Blasio’s rezoning plan — despite the hype — does not guarantee that even one unit of affordable housing would be built, and the coalition members agree. For example, he noted, an easy way for a developer to skirt having to include affordable housing would be to construct a mixed-use building, with, say, six stories of commercial uses on the bottom and six stories of residential on top. Assuming the residential area contains less than 12,500 square feet of total floor area or fewer than 10 apartments, no affordable units would be required under Mandatory Inclusionary Housing.

However, on a positive note, the coalition member said that with Christopher Marte, who opposes the rezoning, now in office in place of Chin and with Eric Adams having succeeded de Blasio, there is renewed hope.

Their agenda is simple, the member said: to protect the people that currently live in Soho and Noho.

The coalition will hold a Zoom “community webinar” on Thurs., Jan. 6, at 7 p.m., though it is not open to the general public or press. The coalition member said it will be for community members, building managing agents and attorneys.

Sunday evening, the Soho Alliance sent out a letter to its e-mail list saying it strongly supports the Coalition for Fairness in Soho and Noho’s effort to sue over the rezoning.

The e-mail also accused former Councilmember Chin of having a “vendetta” against Soho and, as result, giving its residents a parting blow of “extortionate penalties.”

“It’s well established that Margaret Chin has held a political grudge against Soho going back decades, ever since Soho voters overwhelmingly rejected her at the polls numerous times, as far back as 1991, when the cofounder of the Soho Alliance defeated her for City Council,” the letter said, referring to former Councilmember Kathryn Freed. “Well, Chin has sown her revenge in her final days in office.”

The Soho Alliance letter also called out former Manhattan Borough President Gale Brewer for her role in setting the rezoning process into motion in the first place.

“Gale Brewer, who lied to our faces repeatedly in 2019 that the Envision Soho/Noho process was just a study and no rezoning was planned,” the letter said, “has not uttered a word of apology or remorse for the shameful Frankenstein monster she helped create.”