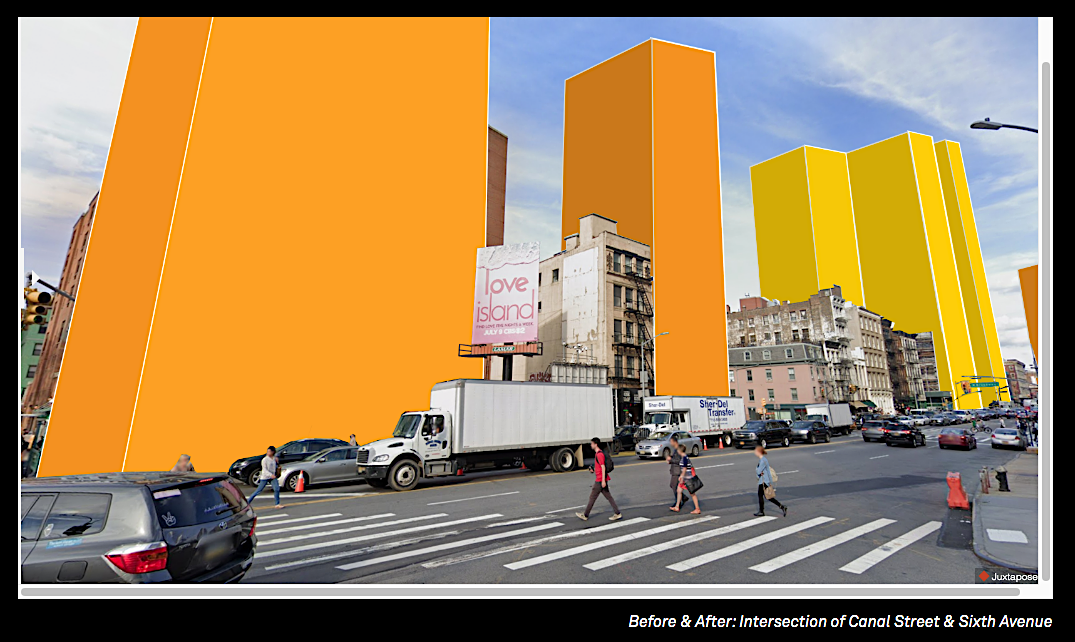 A rendering showing "projected development," in orange, and "potential development," in yellow at Canal St. and Sixth Ave., should the Soho/Noho rezoning be approved. (Municipal Art Society)

Those are the main arguments of Soho and Noho activists, who on Friday sued the de Blasio administration for ongoing “illegal orders and actions” and “blatant violations” of the City Charter as it pertains to the contentious Soho/Noho rezoning.

The litigation seeks a temporary restraining order and injunction to stop the Soho/Noho rezoning application process, warning that the city’s actions “present the threat of irreparable harm to the Soho and Noho population.”

The lawsuit will be heard in Manhattan State Supreme Court on Mon., May 3, and a decision is expected that day.

On the same day, the Department of City Planning is expected to “certify” the Soho/Noho rezoning, starting the clock ticking on the ULURP public-review process, which often takes around seven months.

The plaintiffs include the Soho Alliance and its longtime director, Sean Sweeney; the Broadway Residents Coalition and Pete Davies, a member of its steering committee; Jeanne Wilcke, a Noho activist; and Maria Judith Feliciano Chaves, a Soho resident.

The lawsuit charges the administration with “abuse of power” during the COVID pandemic, saying City Hall has stripped away New Yorkers’ free speech and due-process rights protected under the First and 14th Amendments.

According to the city’s plan, the Soho/Noho rezoning would spur the creation of 3,200 new residential apartments in the two Downtown enclaves, with 25 percent of those being affordable units. But the plaintiffs slam the scheme as “a 3.8-million-square-foot giveaway to developers to build luxury housing, high-rise office buildings and massive retail outlets here — at the same time applying displacement pressure on vulnerable minorities in adjacent Chinatown and Little Italy rent-stabilized buildings.”

Specifically, the lawsuit charges that de Blasio is blatantly violating the City Charter. The suit notes that in 2019 city voters overwhelmingly approved — 72 percent voted yes — a City Charter revision that requires City Planning to send a “detailed project summary” of any impending rezoning actions to the affected community board at least 30 days before the formal certification of the rezoning. Also, under the City Charter revision, the same detailed project summary must be posted on City Planning’s Web site within five days of transmitting the 30-day notice to the community board. The city has failed to follow these legal requirements, the lawsuit asserts.

The City Charter also specifically requires in-person hearings for ULURP, the city’s land-use review process, the suit adds. However, the plaintiffs accuse de Blasio of “double talk,” saying he is “using the pandemic as an excuse to hold virtual-only Zoom public hearings despite the law’s requirement that these public hearings be held in-person, and despite his own announcement on national news that the city will fully reopen by July 1.”

“Clearly, the de Blasio administration is taking advantage of the pandemic to limit the anticipated public opposition and objections to his controversial proposal,” the plaintiffs accuse in a press release. “If people can gather in classrooms or Yankee Stadium, and if city workers can return to their offices, why can’t the city find a location to hold essential public hearings?”

ULURP, the suit notes, is expressly designed to invite public participation in significant land-use decisions, ensuring that residents and the local community board have the chance to analyze and consider the impact that major plans would have on their neighborhoods.

By law, ULURP public hearings must be held at a “convenient place of public assembly,” not remotely, such as on Zoom, the suit contends, noting that no other administrative land-use procedure has this requirement.

On top of that, the plaintiffs also just complain that, “Zoom meetings stink — especially City Planning’s,” and that, whether intentionally or unintentionally, remote meetings violate freedom of speech.

“The city has failed to provide reliable, stable Internet accommodation and software updates to all members of the public to enable participation in its virtual public hearings,” they charge. “Connectivity issues or software glitches prevent people from hearing presentations or testimony, and prevent speakers from providing their own testimony.”

In addition, during Zoom meetings about the Soho/Noho rezoning up to this point, City Planning reps “have muted some speakers,” the plaintiffs charge, while other speakers have been dropped or were not able to speak due to the agency’s software glitches.

And some locals simply do not have access to reliable and stable Internet service, they add.

Furthermore, the plaintiffs argue that the Zoom meetings do not come anywhere near approximating the actual in-person experience.

Things like signs, banners, T-shirts and buttons are “alternate channels for expression” that protesters can effectively use in-person but not virtually, violating their First Amendment free-speech rights, the suit asserts.

Meanwhile, the de Blasio administration has violated 14th Amendment due-process rights, the suit says, by failing to provide the required notice of an upcoming hearing in a timely manner and preventing Soho and Noho residents’ right to be heard in person.