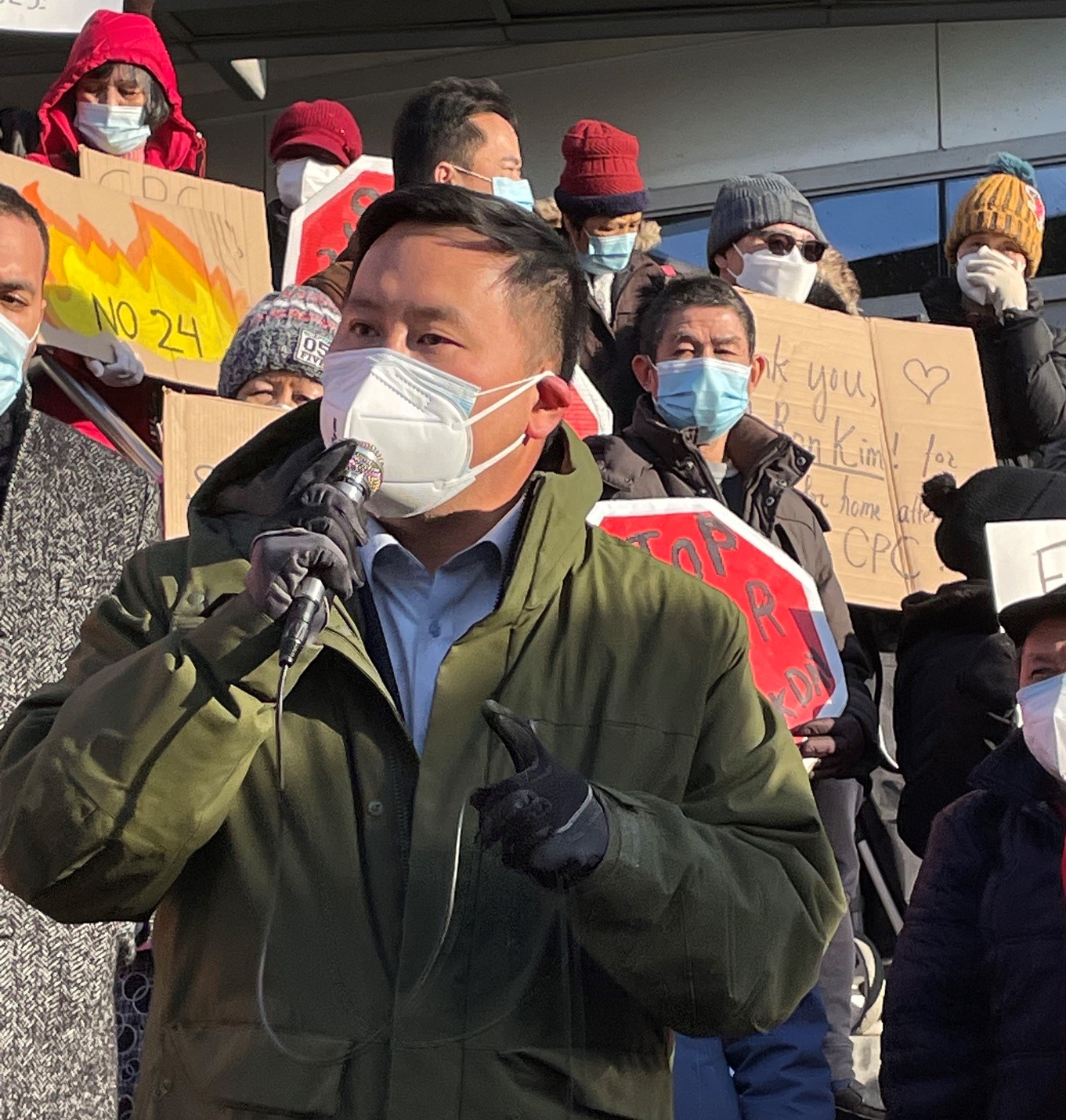 A report by Assemblymember Ron Kim accuses the Chinese-American Planning Council of fleecing its health workers of wages to the tune of $90 million over a six-year period. (Photo by Dashiell Allen)

BY DASHIELL ALLEN | Gui Zhu Chen worked as a home attendant for the Chinese-American Planning Council (CPC) from 2013 to 2019 — until she was forced to quit out of pure exhaustion from toiling on back-to-back 24-hour shifts.

She didn’t get the eight hours of sleep per night that New York State law entitles her to: Like many homecare workers, her disabled patient required round-the-clock care and supervision.

Chen’s story might sound similar to that of many of the roughly 4,500 home attendants employed by CPC, the third-largest homecare provider in New York. In fact, it’s a story that rings true across the industry. Only in her case, Chen had receipts.

Every time she got up at night, Chen wrote it down on a piece of paper, documenting all the hours she worked beyond the 13 per day for which she was compensated. She proudly held those papers up at a rally last Wednesday in Flushing, on the steps of the Queens Public Library.

But, Chen said, using a translator, when she attempted to show her report to CPC, demanding it pay her back-wages, the nonprofit threatened her — telling her she was “extorting the government” and even that it would throw her in jail.

The law is on Chen’s side in this case. While New York State law only requires that home attendants be compensated for 13 hours out of a 24-hour shift, a 2019 Court of Appeals ruling confirmed that, if proof of additional hours worked is given, the agency is liable to pay them.

At the rally, held by the Ain’t I A Woman?! campaign, Chen stood side by side with Flushing Assemblymember Ron Kim and Lower Manhattan Councilmember Christopher Marte, as well as countless advocates and workers.

The rally was held to mark Kim’s explosive 103-page report, “The Nonprofit War on Workers,” which unequivocally accuses CPC of stealing an estimated $90 million in wages from homecare workers over a six-year period.

Through a case study of two workers that sued CPC, Lai Chan and Mei Kum Chu, the report demonstrates the agency’s deceptive menueverings and repeated attempts to thwart justice — by forcing the two women into arbitration, repeatedly trying to dismiss the cases, and appealing rulings all the way to federal court.

The report states, “In one respect, the moral conflict is straightforward and Manichean: CPC has stolen its workers’ wages and subjugated them to the grueling twenty-four hour shift. In another sense, implications of CPC’s actions are forebodingly complex and far-reaching, and…may manifest in the future in ways we have yet to see”

Kim’s report is unique in that he is one of the only state lawmakers to openly speak out against CPC, which has for a long time been a key progressive ally.

Most assemblymembers, including Harvey Epstein, believe that while individual homecare providers may be guilty of misconduct, justice will be achieved only through legal reforms at the state level, such as by raising wages or splitting the 24-hour shift into two of 12 hours each.

“But I promise that this is just the beginning,” he said. “I’m not going away, and we will hold CPC accountable.

“Yes, Medicaid, for-profits — the whole system is broken,” Kim added. “We can all agree with that. But in a broken system, good nonprofits negotiated better terms while the bad ones took on horrible contracts, knowing that they couldn’t make the workers whole.”

In response to the rally and Kim’s report, CPC shot back with a harsh statement.

“The Chinese-American Planning Council Inc. (CPC) has no choice but to point out the lies, untruths and distortions that are being said by the Ain’t I a Woman Campaign and Assemblymember Ron Kim about its subsidiary Chinese-American Planning Council Home Attendant Program Inc. (CPCHAP) in the provision of critical, life-saving home care services to Medicaid patients who cannot afford such services otherwise,” the statement reads.

“CPCHAP has no choice but to provide home care by following New York State Medicaid rules and requirements, as well as Department of Labor laws, court decisions and union agreements,” the statement continues. “We have long called for the state to replace 24-hour home care cases with two 12-hour split shifts, which would be best for both workers and patients. This requires changes to state labor law and Medicaid funding rates.

“Given our years of working amicably and collaboratively with Assemblymember Kim, we were surprised to learn about his report secondhand through a reporter and to see him speak at the press conference organized by the Ain’t I a Woman Campaign,” the CPC statement stressed.

“Judgement day is coming, justice is coming,” assured Councilmember Marte, whose mother is a homecare worker. “If you’re not on the side of these workers, you will be served justice.”

“To their workers CPC has one face, to the public another, but today we all get to see CPC’s true face,” said Sarah Ahn of the Flushing Workers Center, the organization that initially introduced Kim’s office to their cause in April 2021.

Yong Hoo, a representative of Red Canary Song, a grassroots coalition of massage and sex workers in Queens, also stood with the protesters.

“We learn on a daily basis that many massage workers are also homecare workers,” she said. “Both of these are vital industries of care work, and we must pay careful attention to the workers’ voices.”

He then exposed Cuomo for allegedly threatening him over the phone.

“I make no distinction between the modus operandi of the Greater New York Hospital Association, predatory nursing homes and the Chinese-American Planning Council in the latter’s unrestrained exploitation of labor,” Kim said in his report, tying the two issues together.

“This is a story that could easily be told with a different cast of characters,” the report reads. “We could have written this report about oil rig workers off of the coast of California, who too are assigned to barbarous twenty-four hour shifts.

“Irrespective of industry,” it concludes, “the twenty-four hour shift is not an injustice idiosyncratic to our own time — it is a reality so grave that it truly is an injustice across the history of all human civilization.”