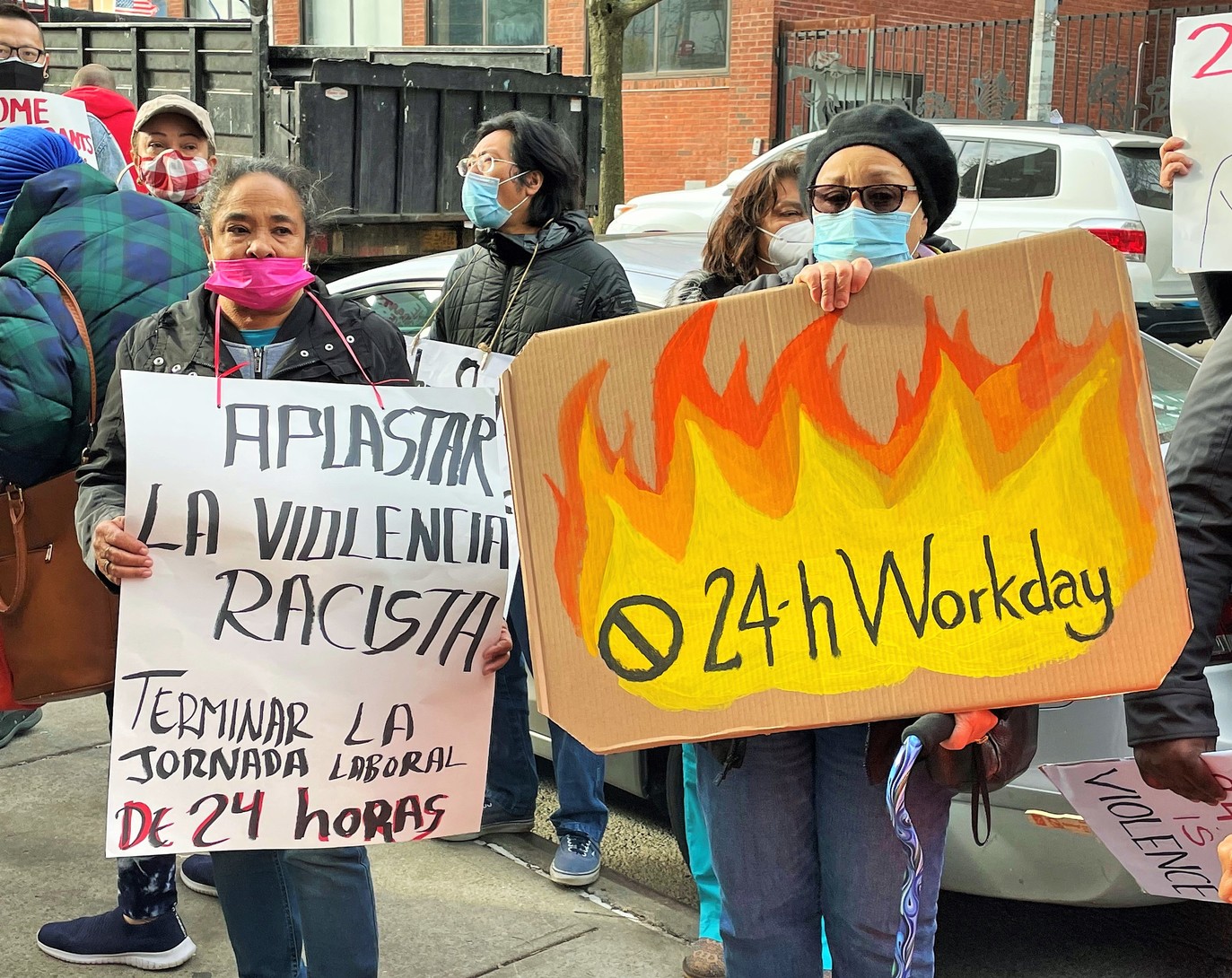 BY DASHIELL ALLEN | The 24-hour workday is “racist violence” and needs to be abolished.

That was the message from the Ain’t I A Woman? Campaign last Thursday at a protest on east Grand Street against the nonprofit home healthcare provider United Jewish Council,which they say is stealing wages and destroying the lives of workers.

The activists are fighting for the rights of home healthcare workers forced to toil on 24-hour shifts for up to five days a week — and in extreme cases for up to two weeks — without rest.

To make matters worse, they’re only compensated for 13 hours, since the remaining 11 are theoretically split between sleeping and breaks throughout the day. But the home attendants say they work around the clock: Most if not all of their patients are elderly and have mental health conditions like Alzheimer’s that demand their full-time attention.

The vast majority of workers in the industry are immigrant women of color.

Epifania Hichez worked for the United Jewish Council for 11 years.

“I’m traumatized,” she said. “I’ve lost everything, especially my health. My shoulders hurt, my knees hurt. … I’ve lost my sense of balance. I retired seven years ago and I still can’t fall asleep at night — and when you can’t sleep you get depressed, and lose your family. I had to divorce my husband because he felt abandoned by me.”

“It was the 24-hour shifts that killed her slowly,” she said.

Working as a home attendant, they said, is both physically and mentally exhausting — and even more so when there’s no time to rest between shifts.

Back in 2017, U.J.C. workers sued their employer for owed wages from working 24-hour shifts, asking for compensation for overtime and the 11 unpaid hours.

Despite multiple attempts by U.J.C. and 1199 S.E.I.U. — the union representing the homecare industry — to block the lawsuit, the New York State Court of Appeals allowed the case to move forward in September of this year.

U.J.C. argued in court that its nonprofit status exempts it from paying minimum wage and overtime.

“At every turn the United Jewish Council has done everything in their power to stop [the workers],” said Vicky Niu, an organizer with the Ain’t I A Woman? Campaign. “They’ve fought us in court, they’ve ignored our letters, and they’ve even been tearing down our posters for this event.”

“To our bosses and to society, our lives don’t matter,” said Yanin Perez, an organizer at the National Mobilization Against Sweatshops (NMASS) Workers Center. “They can just step on us because we’re Indigenous and Black immigrants.

In a statement to The Village Sun, a U.J.C. spokesperson said, “United Jewish Council of the East Side Home Attendant Service Corp. has long been proud to partner with 1199 S.E.I.U. to provide high-quality homecare, and to support our workers through good workplaces and fair wages. That’s why we also support them in the fight for homecare reform so that all New Yorkers can be cared for and live in dignity.

“The United Jewish Council of the East Side Home Attendant Service Corp. has worked around the clock providing services during a pandemic to provide critical, lifesaving work to protect the elderly, infirm and disabled community members,” the statement continued.

“This important mission is being undermined by an ongoing campaign aimed at hurting U.J.C.H.A.S.C. reputation and standing in the community by spreading misstatements about our work and services.”

As to why the nonprofit challenged the workers’ lawsuit, the statement said, “U.J.C.H.A.S.C. is participating in an arbitration with 1199 S.E.I.U. and many other agencies around the city involving the issues at dispute and we expect that an award will be rendered shortly.

“In addition, U.J.C.H.A.S.C. will continue to work for homecare reform to meet the needs of our employees and those that we serve. U.J.C.H.A.S.C. cares about our community, our workers and our mission and that is never going to change.”

There are several bills in the state Legislature right now aimed at allowing workers to claim stolen wages, raising the minimum wage for homecare workers and splitting the 24-hour shifts into two nonsequential 12-hour ones.

Assemblymember Harvey Epstein, whose district includes the East Village and part of the Lower East Side, introduced the latter bill a few years back; it passed in both state chambers only to be vetoed by then-Governor Andrew Cuomo.

Epstein dealt with this issue for decades as a lawyer before he entered the Assembly, helping workers sue their employers for back pay, “only to be overruled by the [state] Department of Labor,” he noted.

His bill would require New York State to increase funding for home health aides by half a billion dollars to pay for the 12 hour shifts, and would need to be part of the annual budget negotiations, Epstein explained.

“The biggest obstacle to making [the bill] workable is the money,” Epstein said. “People think it’s a bad system — but we don’t have the money, according to the Governor’s Office, to pay them.

“The money is there if the will is there,” he contended, pointing out that the amount represents less than 1 percent of the state’s $210 billion budget in 2021.

Still, Epstein doesn’t believe too much of the blame should fall on individual agencies like U.J.C.

“It’s a state system,” he said, “let’s be clear. The state set up the system and so the agencies decided to take these shifts. But the state is the one who’s culpable and I would argue liable. It doesn’t mean the agencies don’t have some culpability, but most of it falls under the state and the Governor’s Office.”

Epstein believes that working to pass all three bills is the best way to achieve “systematic change,” rather than settling with each agency individually. He stressed that making sure the bills are included in next year’s budget will be a top priority for him.

Some lawmakers see it slightly differently. On Twitter Queens Assemblymember Ron Kim said, “The implication that nonprofits are enforcing 24-hour work because the state somehow allows them is ridiculous. … We can undoubtedly pass [Epstein’s] bill to end 24hr work, but that doesn’t absolve the employers’ wage theft.”

“I am calling on U.J.C. to lead with their values, end the 24-hour shift, have mercy on their workers and stop delaying,” Kim said in a statement.

At least 32 smaller homecare agencies throughout the state have already agreed to settlements with some of their workers.

According to a statement from the Ain’t I a Woman? Campaign, this settlement “sets a new standard for back pay for all agencies to follow,” especially significantly larger agencies, like U.J.C. and Chinese-American Planning Council.