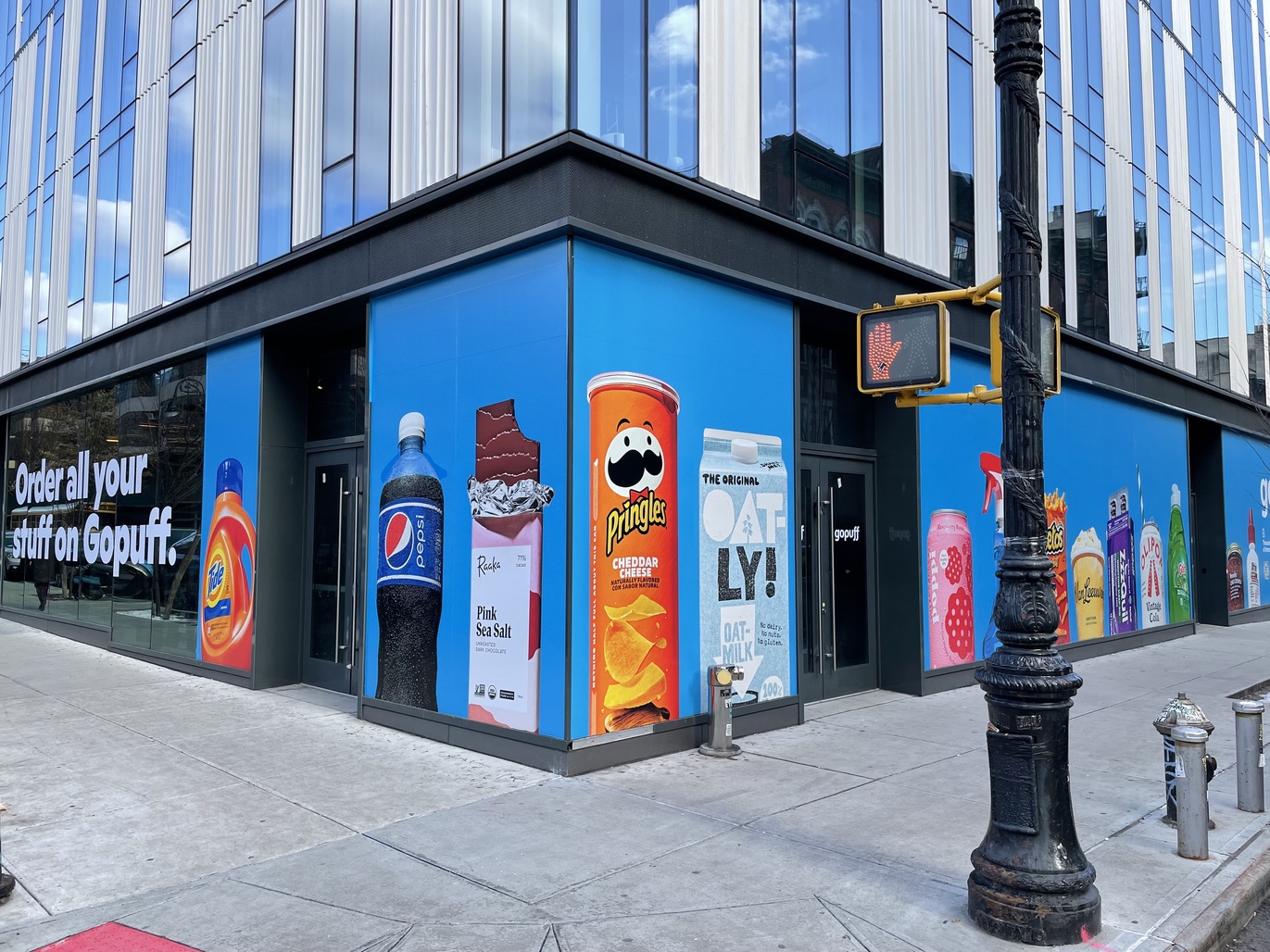 Critics say the new stores, like this Gopuff on Rivington Street, are basically illegal warehouses, in violation of commercial zoning, since they don't allow walk-in customers. (Photo by Dashiell Allen)

That’s according to a coalition of elected officials, bodega and deli owners and small business associations that rallied last Sunday at Rivington and Suffolk Streets in front of Stop 1 Deli, a family-owned corner store operating since 1982. It’s also right across the street from the delivery company Gopuff, located in the ground-floor retail space of a luxury condo building, where a two-bedroom apartment goes for $2.1 million.

For the past couple of months about a half-dozen app-based “15-minutes-or-less” grocery apps, including Gopuff, Fridge No More, Jokr, Buyk and Gorillas, backed by million-dollar investments, have been rapidly cropping up all across Downtown Manhattan.

Bodegas fear they won’t be able to compete with the newcomers’ fast service and generally lower prices.

These new businesses operate out of neighborhood “hubs,” street-level warehouses stocked with groceries and home essentials that can be ordered with a click of a finger.

The bright, saturated logos plastered on these operations’ windows might look attractive to passersby — but don’t be deceived, said the protesters.

These glitzy billionaire apps don’t have to struggle paying the skyrocketing cost of New York City rent, unlike small, mom-and-pop bodegas. Gopuff, for example, is valued at $15 billion, thanks to funding from Guggenheim Investments, Hedosophia and SoftBank Vision Fund.

“They have a lot of cash to not be profitable in the first few years, and so this is a long-term strategy to really take over the corner stores,” said Councilmember Christopher Marte, whose father used to own a bodega just a few blocks away. “They can stay alive for five years in the market and try to build their customer base, and I think we have to act now because, if not, then it’s going to be too late.

“If you go to any block or community throughout New York City you see how bodegas are the epicenter of that community,” he added. “When you look at who works in these bodegas it’s mostly immigrant families, not just Dominican, but Puerto Rican, Yemeni and Chinese.

“In a five-block radius of where I live, I know of six [15-minute-delivery stores],” he said.

These stores may be a new phenomenon in New York City, but across the country they’ve existed for at least the past eight years.

Gopuff, which was founded in Philadelphia in 2013, made its Big Apple debut in October 20, 2021 — and they’re expanding fast.

“In the past 12 months alone, the company has opened more square feet of space than in the previous 36 months combined, quickly investing in new markets along the way,” reads a recent statement.

“This is a threat against our bodegas, and entrepreneurship is in danger of disappearing,” said Jose Frias, a supermarket owner from the Bronx, speaking at the rally. “If businesses like this keep popping up we are going to disappear.”

Now, the newly formed, ad hoc Save Mom-And-Pop Business Coalition is fighting back.

“I don’t think they are lawfully there,” said Councilmember Gale Brewer. “These are warehouses in a retail district.”

Brewer, along with Comptroller Brad Lander and Councilmembers Carlina Rivera, Lincoln Restler and Marte, argue that these “dark stores,” by being shuttered to the public, are in violation of street-level commercial zoning, and therefore illegal.

In an e-mail to The Village Sun a representative for Gopuff stated emphatically that all of its locations are in compliance with zoning requirements.

Gopuff does not operate “dark stores,” the rep stated, adding that members of the public are free to shop in-person at any time.

But that wasn’t The Village Sun’s experience when this reporter tried to enter the location on Rivington and was refused entry. The only way to shop is by ordering online, explained a Gopuff employee, who confirmed that was true across its network.

When asked about this, the representative did not immediately respond with further clarification.

Nevertheless, bodega owners, or “bodegueros,” are building their own delivery service, mybodega.online, that they hope will eventually help them to stay competitive. Just like the venture capitalists, they advertise “Delivery in less than 15 minutes” — but they don’t have billions of dollars backing them.

Garcia also expressed hope that Mayor Eric Adams will be supportive of their cause, noting, “for the first time our mayor has our interest,” adding “hopefully he won’t prove me wrong.”

“Bodegas have been present when others have been absent,” said Radhames Rodriguez, president of United Bodegas of America (UBA). “To secure our service we must become part of the online commerce revolution.

“We ask New Yorkers to join this movement to save bodegas with technology,” he said. “Now we can use our own technology to fight back and win.”