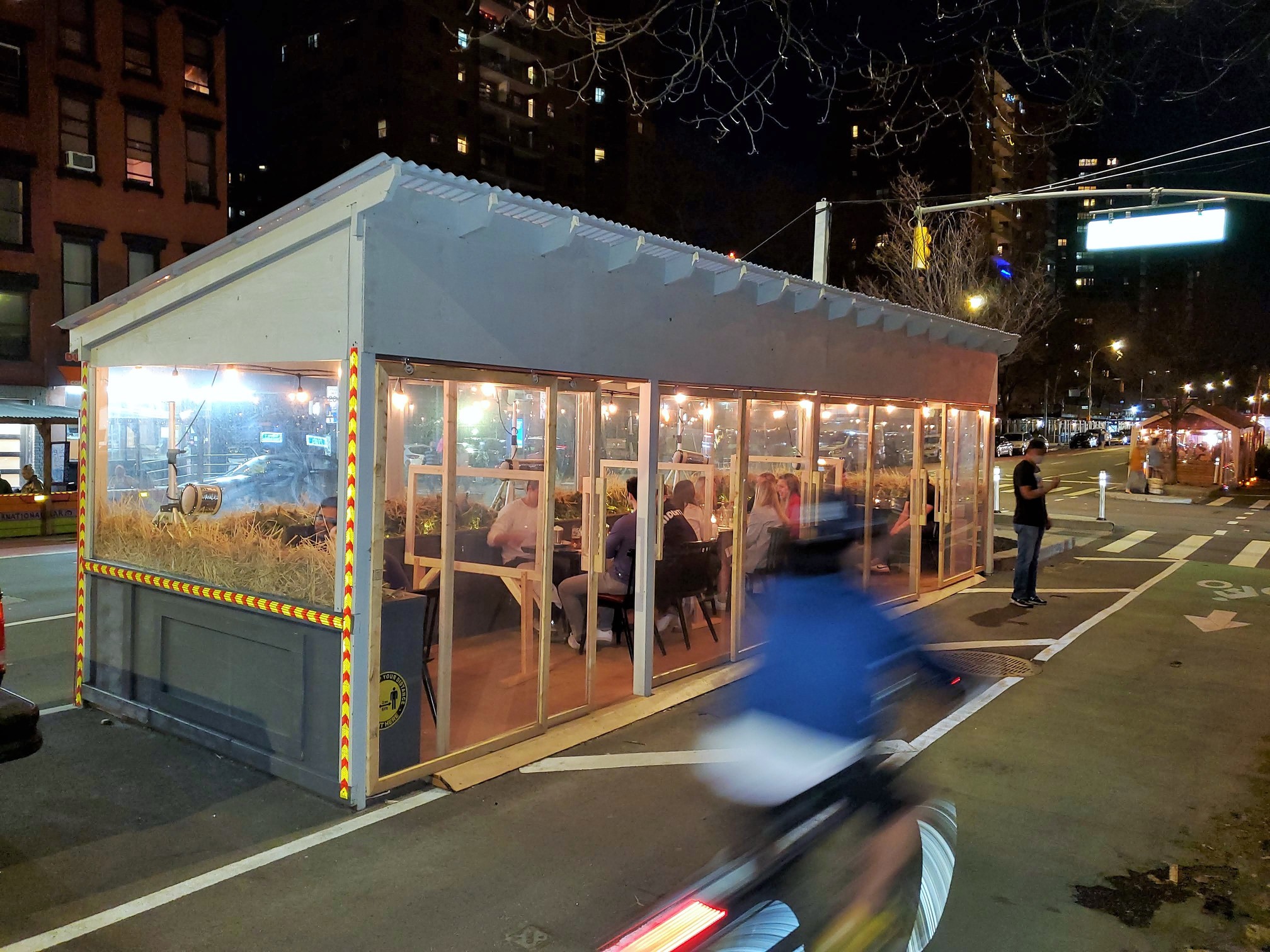 A restaurant shed on First Avenue in the East Village. The cyclist is riding the wrong direction in the bike lane. (Photo by The Village Sun)

Source: Permanent Open Restaurants bill due by end of next month; One-year or longer phase-out eyed for contentious ‘streetery’ sheds

The Village Sun has learned that a bill for New York City’s permanent Open Restaurants program could be “ready to go” as early as the end of November.

A city government source close to the story told the newspaper that a group of local community activists concerned about Open Restaurants recently met with the City Council staffer who is the point person for drafting the bill. Councilmembers Erik Bottcher and Christopher Marte reportedly made the meeting happen. Marte has previously marched with community residents who vehemently oppose permanent dining sheds.

The source told The Village Sun that there are three “highlights” of the bill so far, at least as he sees it. First, the permanent Open Restaurants program will be “seasonal.” However, the source could not say at this point what the exact start and end dates of the season would be.

Second, roadway sheds — or yurts, shanties or “streeteries,” or whatever one chooses to call them — will not be part of the permanent plan. Instead, as the Department of Transportation has previously said, there will be tables, chairs and umbrellas — but no sheds — that will be placed in the roadway that can be “taken in.” However, again, all the specifics have not been nailed down yet. For example, it’s not clear if operators would be required to take the street furniture indoors after hours.

Third, under the bill being drafted now, oversight and jurisdiction of Open Restaurants would remain with the city’s Department of Transportation, not shifted to the Department of Consumer and Worker Protection, as critics have advocated for. Shed critics charge that D.O.T. has not done nearly enough enforcement against violations of the program and bad operators of the sheds, in general.

The government source added that much still remains to be negotiated, and that during the meeting between the Council staffer and community residents, which occurred last week, some clear negotiating points emerged. For starters, it sounds like the city wants a phase-out period — of up to one year to 18 months — for the sheds. This clock would start ticking, apparently not after Mayor Adams signs the bill, but after a six-month legislative/rules-making process.

The extended grace period is not because it’s so hard to remove a flimsy plywood shed. After all, taking down a ramshackle restaurant shed is not exactly like demolishing the Seattle Kingdome. Mayor Adams himself even showed it’s easy to knock a shed down, when he took a sledeghammer whack at one of the derelict structures in Midtown at a press conference not long ago.

Instead, by giving restaurants a year or more to shed the contentious sheds, it gives these businesses time to “shift their model” of operation, according to the source. For example, some restaurants might have hired more staff to man their sheds. By giving eateries some time to transition to shedless dining, it would avoid a big wave of layoffs of workers all at one time, the source noted.

Naturally, the NYC Hospital Alliance also is said to support this gradual phase-out of the sheds. Meanwhile, on the other  hand, shed critics obviously want the culinary “little houses” off the streets ASAP.

One option that might be considered is reportedly to accelerate the phasing out of sheds faster in neighborhoods heavily “oversaturated” with them — such as Greenwich Village and the East Village — but to allow more time for their removal in outer-borough neighborhoods that previously lacked outdoor dining. So, possibly the Downtown-area sheds could be ordered to be phased out in, say, three months, the source speculated.

However, Leslie Clark, a leader of the West Village Residents Association and of CUEUP — an ad hoc, citywide anti-sheds group — said that whoever tipped The Village Sun off about some aspects of the pending bill only told part of the story — and left out what critics feel is the  most important part. She declined to say whether she attended the meeting with the Council staffer.

There was previously a major City Council hearing, back in February, regarding a zoning text amendment to strip out all existing sidewalk cafe regulations from the city’s zoning. New sidewalk cafe rules were then to be created as part of the overall outdoor dining plan. However, “a lot has changed since Feburary” Clark stressed.

As for the generous phase-out period for the roadway sheds, Clark bristled, “A one-year extension for Open Restaurants is not acceptable.”

There have already been two community lawsuits filed against Open Restaurants, on one of which Clark is an individual plaintiff. State Supreme Court Justice Frank Nervo ruled on the first lawsuit in March, declaring that the city was remiss not to have done a full-scale environmental impact study, or E.I.S., for the sweeping program. In addition, a second lawsuit, filed in July, seeks to end Open Restaurants immediately, arguing that there is no longer a health-related emergency to justify keeping the pandemic-inspired program going. Attorney Michael Sussman is representing the plaintiffs on both suits.

An Appellate District court recently dismissed the first lawsuit on appeal by the city, decreeing that the suit was not “ripe,” since the permanent Open Restaurants bill — which would codify the currently temporary program’s rules — has not been approved yet.

Clark assured that the first lawsuit was not “tossed,” as some shed supporters have tried to spin it, but is ready and waiting for whenever the moment is ripe to refile it.

“They say we weren’t ripe — which means we were too early,” she said. “We can come right back. That door is still wide open. They only shut us down on ripeness, not on the merits. They only said we were too early — we weren’t too late. Frank Nervo said they need to do an environmental impact study, and that has not been decided by the Appellate Division — not yet.

“We want a public hearing and we want an environmental impact study,” Clark said, “and the Appellate Division left that door wide open.”

An E.I.S. would include scoping for the program (determining its scope), a public hearing and also a public comment period.

“An environmental impact hearing means a tremendous amount of public input,” Clark explained. “That’s what should happen. It should be open for everybody to know about.

However, the government source said that the office of Council Speaker Adrienne Adams does not feel the bill needs an additional public hearing and feels that this position is legally sound. The politico noted, in the typical City Council legislative process, there is an initial bill, which is then reviewed and discussed at a public hearing. Feedback gathered at that hearing, in turn, is then used to modify the initial bill, resulting in a final bill.