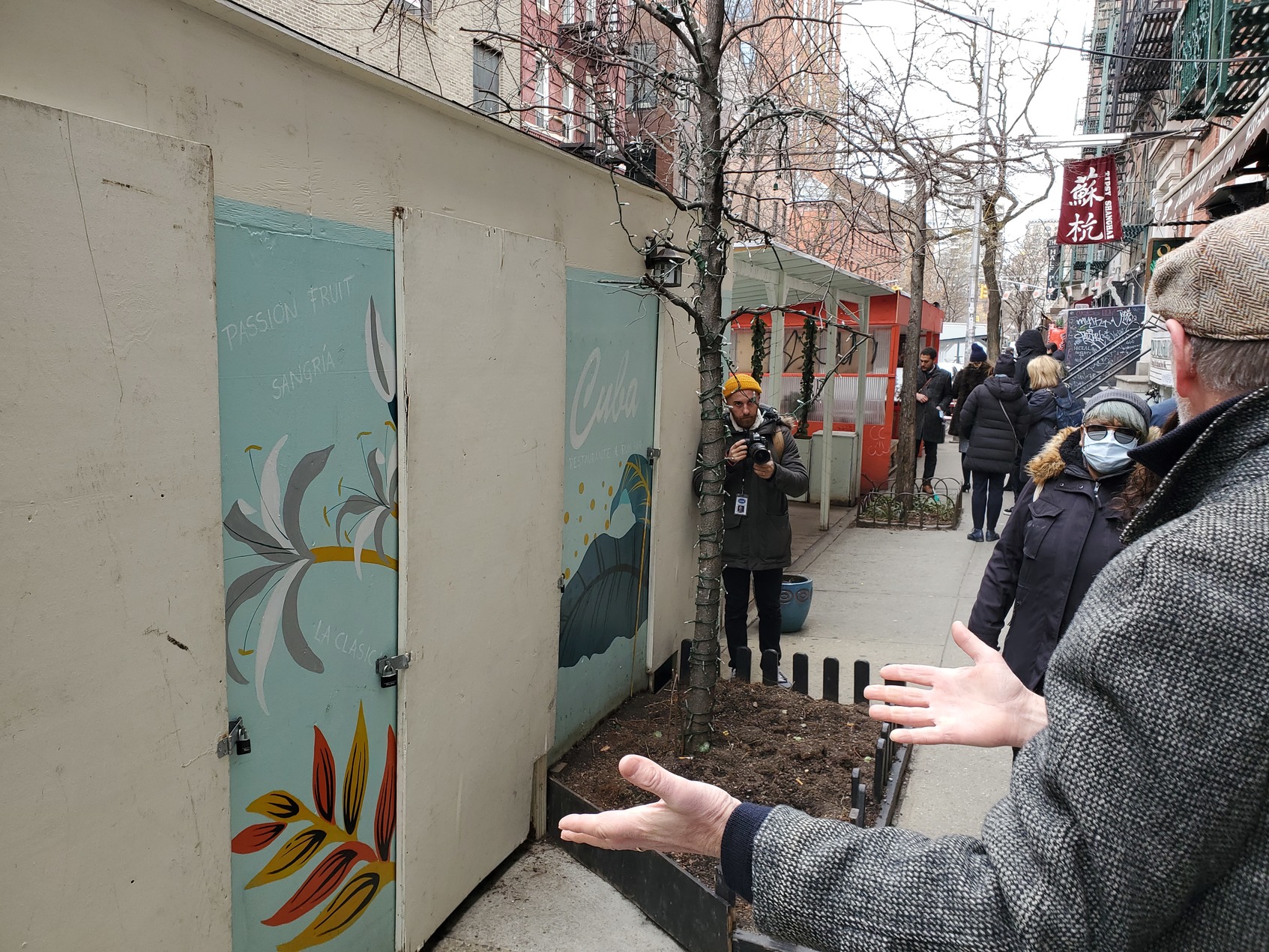 In March, during a tour of the Village's restaurant sheds with Councilmembers Marjorie Velázquez, Christopher Marte and Erik Bottcher, one of the bulky — and illegally fully enclosed — structures, on Thompson Street outside Cuba restaurant, was pointed out to the politicians. (File photo by The Village Sun)

Court nixes prior ruling against Open Restaurants, but dining-shed foes vow, ‘It’s not over!’

BY LINCOLN ANDERSON | Updated Oct. 5, 12 p.m.: Just as in comedy, when it comes to community lawsuits, timing is everything.

An Appellate court on Tuesday, agreeing with the city’s Law Department, declared that the time is “not ripe” for a ruling on a community lawsuit seeking to compel the city to conduct a full-scale environmental review on the contentious Open Restaurants program.

However, an advocacy group supporting the suit charged that the court’s ruling “failed to address the environmental impacts of the controversial program,” and so merely “delays the reckoning” that is to come on the city’s effort to skirt doing a proper environmental review on the sweeping scheme.

Meanwhile, pro-development YIMBY groups and other advocates for Open Restaurants, like Streetsblog, crowed that the lawsuit was “tossed” out of court. However, Leslie Clark, a member of CUEUP, an ad hoc citywide residents group that facilitated the lawsuit — on which she is a plaintiff — told The Village Sun that’s far from the truth.

“Streetsblog can say they threw it out,” Clark scoffed. “They did not throw it out — Streetsblog is wrong.

“People seem to have got this wrong — they did not rule on the merits of the case,” Clark stressed. “[The Appellate court] just said, ‘You brought it too early.’ They want to see the permanant Open Restaurants program first. All it means is that it’s ‘not ripe’ — in their opinion,” she said of the lawsuit. “We disagree.”

Told of Clark’s comment, Streetsblog editor Gersh Kuntzman responded, “The ruling speaks for itself and I believe our story is very straightforward.”

As for the trash on the streets that critics say the dining sheds has increased, Clark quipped, “It’s ripe all right.”

Plus, Clark stressed of the court’s “ripeness” rejection, “That does not keep us from coming back” and continuing to litigate the lawsuit. “And we plan to,” she said. “When the city acts — we’ll be back.”

By “acts,” Clark was referring to the city’s creating a permanent Open Restaurants program to replace the current temporary one. Signaling a pending vote on permanent legislation could be afoot, the City Council recently posted a 24-page revised proposed bill — known in Council lingo as an “Intro.” — on its Web site, though with extensive modifications and additions compared to a previous version that was posted back in February. (Brackets indicate language that has been taken out of the earlier version while underlines denote additions.) Marjorie Velázquez, chairperson of the Committee on Consumer and Worker Protection, is the point person on the bill.

As for Tuesday’s court decision, the Appellate Division’s First Department said that State Supreme Court Justice Frank Nervo erred in his March 23 ruling by decreeing that a full environmental review of Open Restaurants under the State Environmental Quality Review Act must be done. The city’s Department of Transportation had previously cursorily claimed that the program — which has launched 12,000 dining sheds onto the city’s streets — has no negative impacts whatsoever.

“For a taxpayer-supported agency to declare, in effect, the Open Restaurants Program and Outdoor Seating have no negative impact on our streets and communities because that Agency has unilaterally made that determination,” Nervo wrote in a scathing decision this spring, “serves only as a thinly veiled attempt to avoid statutory scrutiny of the program by a baseless claim of its own omnipotence.”

After the Appellate court’s ruling, Mayor Adams tweeted that it was “great news” for the city.

This ruling is great news for New York City’s comeback.

The Open Restaurants program saved 100,000 jobs during the pandemic, and it’s time for a permanent outdoor dining program that will make ALL New Yorkers proud. https://t.co/SXHzBCjteu

Seeking to speed up the sheds’ removal, attorney Michael Sussman, who filed the original anti-sheds community lawsuit in March, filed another community lawsuit against the Open Restaurants program in July. Clark explained that Tuesday’s Appellate court’s ruling on the first suit does not moot the second case — which is still alive. The first lawsuit — the one the Appellate panel said was not ripe — argues that the city must do a full and proper environmental review for Open Restaurants under New York State law.

“The second case is that the mayor is keeping the program based on emergency orders — but we don’t have an emergency,” Clark explained. “It’s sitting before a judge on the State Supreme Court.”

In response to the city’s appeal of Nervo’s ruling on the first lawsuit, the Appellate court indicated that a decision on such a legal challenge should wait until the city is actually ready to replace the current temporary Open Restaurants program with a permament one.

“Given the remaining legislative and administrative steps that must be taken by the City before the permanent outdoor dining program is finalized and implemented in place of the presently operating temporary program, the City’s issuance of the SEQRA negative declaration was not an act that itself inflicts actual, concrete injury,” the Appellate justices said in their decision.

(The program’s critics, though, would argue that the sreet-seating scheme has been causing “actual injury” since it continues to impact their quality of life).

“Accordingly, the petition seeking to annul the [D.O.T. negative] declaration should have been dismissed as not ripe for judicial review,” the court said this week. “In view of the foregoing, we need not address the merits of petitioners’ challenge to the City’s action.”

Anti-shed advocates said the current setback was just a technicality on timing and that the court’s action still “leaves the door wide open” for future legal action to end Open Restaurants.

“Yesterday’s two-page Appellate ruling failed to address the environmental impacts of the city’s controversial Open Restaurants program,” said a release posted by CUEUP, some of whose members are plaintiffs in both lawsuits. “Instead, the [Appellate] decision concerned itself exclusively with the timing of the petitioners’ initial filing — and said nothing about the merits of the case. The court’s decision merely delays the reckoning on the city’s end-run around New York State’s Environmental Quality Review law.

“The negative environmental impacts of the city’s pandemic-era program are evident throughout the five boroughs, impacting thousands of New Yorkers,” CUEUP said. “The court is not disputing that fact.

“The Appellate Division simply stated that it ‘need not address the merits of petitioners’ challenge to the city’s action’ — leaving the door wide open for future legal action challenging the permanent Open Restaurants program that is now coming up for a vote by 51 city councilmembers at the request of the mayor.”

“Opening this process to the public and soliciting its response would have doomed the proposal and embarrassed those who supported it,” noted petitioners attorney Sussman.

“New Yorkers deserve to have a city government and elected officials who abide by our environmental laws, which require public review and comment,” CUEUP’s press release said. “We are considering all legal avenues available to us and look forward to re-filing our action when the city has completed the permanent Open Restaurant legislation. The fight to protect our public space from privatization, to safeguard our environmental laws and to rein in unbridled government overreach is far from over.”

Meanwhile, City Council Speaker Adrienne Adams, in a clear break with the mayor, last week said — as the Council is reportedly nearing a vote on rules for permanent outdoor dining — that she wants the dining sheds out of the roadway and that eateries’ seating can be on the sidewalk instead.

As Streetsblog reported, “Council Speaker Adrienne Adams appeared to throw the entire Open Restaurant program under the bus on Tuesday morning, suggesting that the revolutionary de Blasio-era repurposing of roadway space from storage of privately owned cars to outdoor dining was a mistake, despite how few parking spaces it actually took and how many jobs the city estimated it saved.”

“Outdoor dining, in my perspective, should be sidewalk,” Speaker Adams told a Citizens Union breakfast, per Streetsblog. “The street extensions were designed to be temporary.”

However, aftter the Council speaker’s statement, Councilmember Erik Bottcher, who represents District 3 (Greenwich Village/Chelsea/Hell’s Kitchen), dug in his heels against removing all the pandemic-inspired dining sheds.

“The use of road space for outdoor dining has been an overall positive development,” Bottcher told Streetsblog. “Banning all restaurants from using road space for dining would be a mistake.”

Meanwhile, Andrew Rigie, head of the NYC Hospitality Alliance, naturally hailed the Appellate court’s decision on what he called the “streeteries.”

However, in his March 23 decision, Justice Nervo wrote that the flood of Open Restaurants sheds on the streets “warrants nothing less than a comprehensive and earnest consideration and examination of the actual impacts of the already implemented program upon the daily functioning of the city’s sidewalks and streets, as well as the impact upon locally affected residents.

“The programs have, at a minimum,” Nervo said, “impacted traffic and noise levels, and may have significantly impacted sanitation. Petitioners cite the increase in noise complaints in locations where the program has been implemented as further evidence of the environmental impacts.”

Meanwhile, Governor Hochul recently agreed to stop issuing monthly COVID-emergency executive orders, which Sussman and shed opponents said had been “giving cover” to Mayor Adams to keep the Open Restaurants program going. In response, the plaintiffs agreed to remove Hochul’s name from their lawsuit. However, despite there no longer being any health-releated need for the roadway dining sheds, Mayor Adams continues to issue an emergency order every five days to keep the program going.