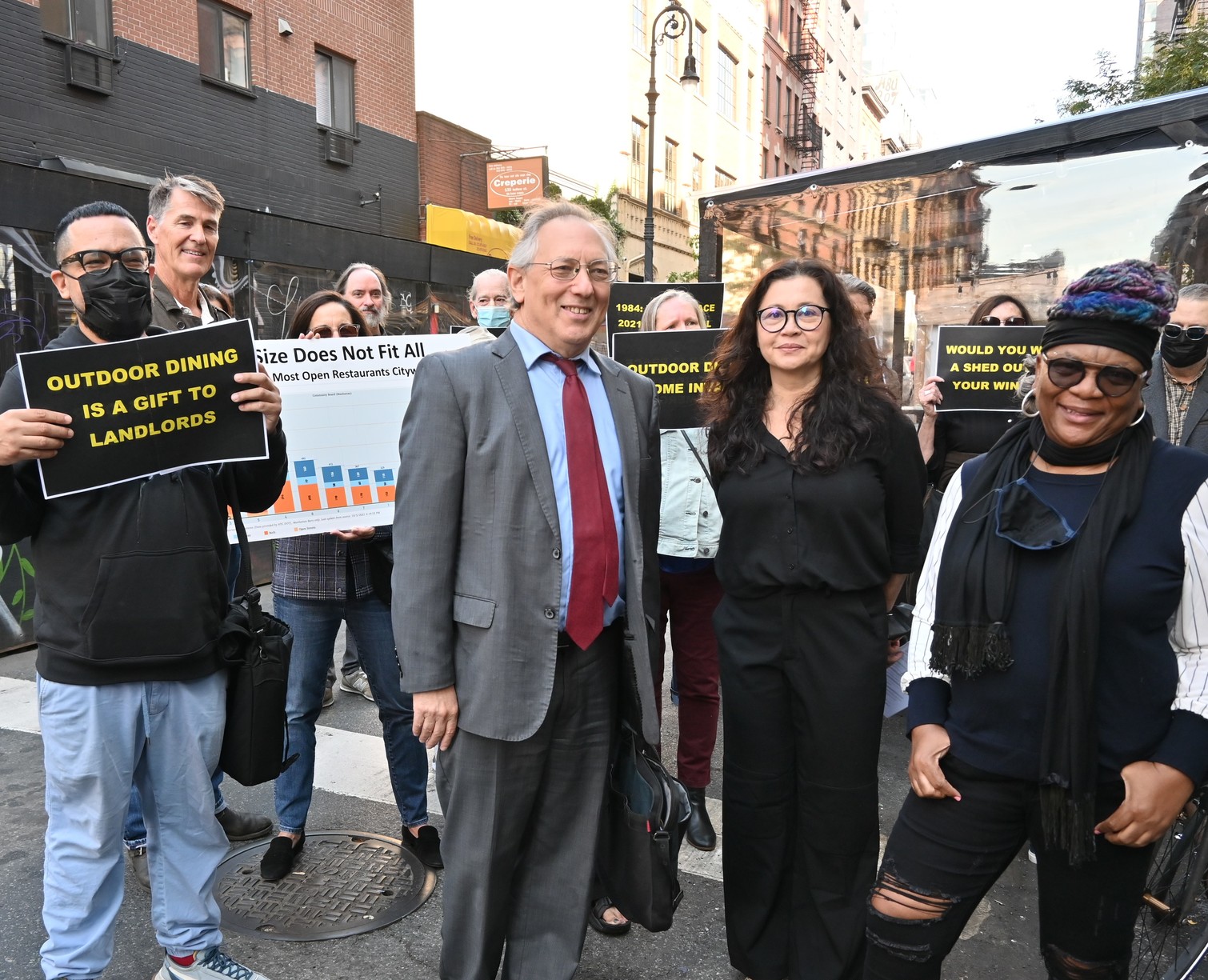 In October, attorney Michael Sussman, center, joined Diem Boyd of the LES Dwellers, to the right of him, and other local plaintiffs at a press conference on their lawsuit to force the city do a proper environmental impact study on the Open Restaurants program. (Courtesy CUEUP)

Calling New York City’s actions “arbitary and capricious,” a state Supreme Court justice has ordered that a complete environmental review must be done for the city’s contentious Open Restaurants program.

The March 23 ruling by Judge Frank Nervo effectively nullifies the City Council’s recently passed Zoning Text amendment to scrap long-standing sidewalk cafe regulations, which would have permitted outdoor dining on nearly every street in the city.

Nervo found in favor of 22 New Yorkers who sued the city this past October over its pandemic-inspired outdoor dining schemes. The plaintiffs argued that the Open Restaurants program, which is being overseen by the city’s Department of Transportation, had many negative impacts that required an environmental review.

There are currently more than 12,000 roadway dining sheds in the city, with the highest numbers of them concentrated in Downtown Manhattan’s three City Council districts.

The plaintiffs argued that, instead of the city just “pre-judging” the program and assuring it would have no impact, it needed to review Open Restaurants under the State Environmental Quality Review Act a.k.a. SEQRA.

A SEQRA review, Nervo noted, would mandate taking “a hard look” at the program’s potential impacts on things like “unabated noise,” “potential safety hazards,” traffic and parking, sanitation and neighborhood character. However, that review and associated required hard look never happened, he said.

Nervo, in his ruling, acknowedged that Open Restaurants was created by pandemic emergency declarations by former Governor Cuomo and de Blasio. But, he said, that doesn’t mean the city should be let off the hook from having, at some point, to do a required environmental impact study for the sprawling, citywide program.

On the contraray, Nervo said, the situation “warrants nothing less than a comprehensive and earnest consideration and examination of the actual impacts of the already implemented program upon the daily functioning of the city’s sidewalks and streets, as well as the impact upon locally affected residents.”

According to the judge, it’s fair to say that, “The programs have, at a minimum, impacted traffic and noise levels, and may have significantly impacted sanitation. Petitioners cite the increase in noise complaints in locations where the program has been implemented as further evidence of the environmental impacts. Consequently, these impacts may be significant, and therefore the environmental impact studies and public comment are required under SEQRA.”

The operative word in determining whether environmental impact studies are required, the judge stressed, is “may.”

In ruling against the city, Nervo also said that because the Open Restaurants program is still “not fully developed,” City Hall’s having claimed early on that the program would have no impact is “the very definition of impermissible pre-judgment.”

The lawsuit plaintiffs live in nightlife-heavy neighborhoods from Greenwich Village, Chelsea and Hell’s Kitchen to the East Village, Lower East Side and Williamsburg. At least one plaintiff was also a merchant who complained the dining sheds were negatively impacting her business.

In a strongly worded ruling, Nervo dismissed the city’s argument and rebuked its actions.

“For a taxpayer-supported agency to declare, in effect, the Open Restaurants Program and Outdoor Seating have no negative impact on our streets and communities because that Agency has unilaterally made that determination,” he wrote, “serves only as a thinly veiled attempt to avoid statutory scrutiny of the program by a baseless claim of its own omnipotence.”

Nervo lives in and has roots in Greenwich Village, where his forebears owned a grocery store. He is a past president of the Village Independent Democrats political club.

Civil-rights attorney Michael Sussman, who represented the petitioners, said, “The New York State Supreme Court today affirmed the rule of law against those who would rush through programs intended to radically change this great city. And, this law applies to small towns, villages, and to this great city.”

The city now has 30 days within which to appeal the ruling.

Under Mayor Adams, who glowingly says outdoor dining makes the city “feel like Paris,” the City Council held a single hearing — albeit nine hours long — in early February. Two weeks later, the Council voted to strip away decades of zoning regulations that had prohibited outdoor dining in residential districts.

Separately, the City Council is now moving forward with drafting a law that is meant to oversee the Open Restaurants program — including the roadway sheds, which D.O.T. has said would be phased out next year.

The judge’s ruling, though, means that the city will effectively have to start over, beginning with a thorough environmental impact review as required by state law.

“This case was about more than Open Restaurants. It was about following our land-use process,” said George M. Janes, a Manhattan-based city planner and zoning specialist. “If an action has the potential for significant environmental impacts, those impacts have to be studied and disclosed in all projects, even those that the mayor wants to get done quickly. I’m glad Judge Nervo agreed.”

Lower East Side resident Deborah Gonzalez, one of the lawsuit petitioners, said the city forced beseiged residents to fight back.

“When our government is not doing the right thing by us, we have to demand it,” she said. “I’m so grateful for the judge’s decision. Those of us who’ve lived with noise, trash, rats and crowded streets and sidewalks for 18 months felt gaslighted when the D.O.T. said that there were no negative impacts on our lives.”

Attorney Sussman added, “To the extent municipal leaders do not comply with the law, the people must force the issue. An independent judiciary is critical to the rule of law and that has been made very clear today. I am proud today of the many throughout the city who have stood against lawlessness and for careful scrutiny of the impacts of open restaurants. Now, the real work begins.”

After the big legal win, shed foes spoke at the Community Board 2 meeting on Thursday and said the pressure must be kept up.

Leslie Clark and Micki McGee, two leading members of CUEUP, both said that for the courts to rule in favor of an Article 78 lawsuit — which challenges a city action — is pretty unusual. McGee said only about 10 percent of Article 78 cases are successful.

John Grimes, a local resident, said he has a “pod” right outside his window and it’s a nightmare.

“It is not outdoor dining,” he said. “It is outdoor drinking, Mardi Gras every night.”