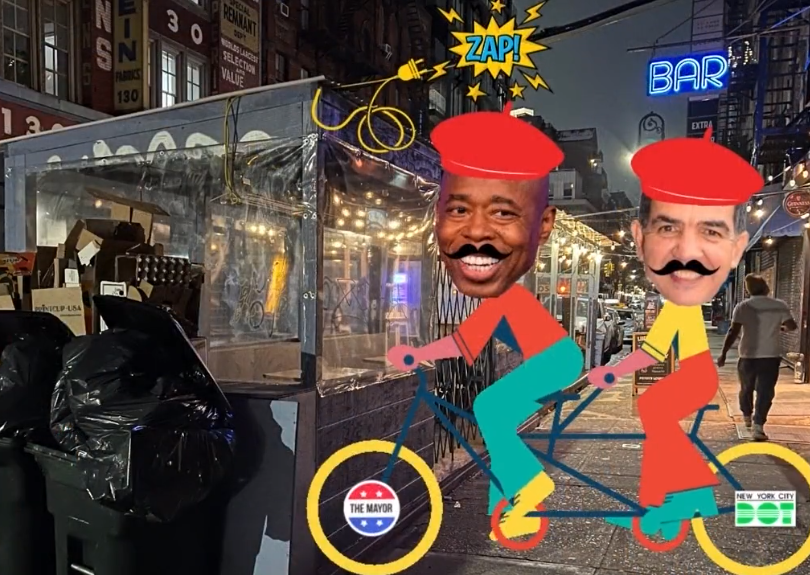 Mayor Adams and D.O.T. Commissioner Ydanis Rodriguez ride into a hanging electrical wire stretched across a bike path to a dining shed in the spoof video.

While some gauzily call New York City’s Open Restaurants program “just like Paris,” others, like the LES Dwellers, are just hoping we won’t always have it.

But Mayor Adams, on a recent tour of the East Village, said outdoor dining still serves a purpose, even after he recently lifted vaccine mandates for indoor dining.

“So, here’s the win,” Adams said. “Because of a great City Council, we have outdoor dining, we feel like Paris now. Paris feels like New York. So, if you’re not ready to come indoors, you could do it outdoors.”

But, as the dining shed opponents note, rats are also “doing it outdoors,” as in feasting on table droppings and garbage, thanks to Open Restaurants.

The LES Dwellers, whose leader Diem Boyd, is part of a lawsuit seeking to keep Open Restaurants from becoming permanent, made a video spoofing the mayor’s remarks.

The clip features Adams and Ydanis Rodriguez, the Department of Transportation commissioner, sporting red berets and moustaches and pedaling a bicycle built for two. D.O.T. has been overseeing the outdoor dining program, which, critics note, has seen almost no enforcement.

Andrew Rigie, the director of the New York City Hospitality Alliance, also makes an appearance as a handlebar-mustachioed waiter standing beside dilapidated and gated-off dining sheds.

Meanwhile, in the short video, beret-wearing rats smoke Gauloises, gobble pizza, smelly cheese and, of course, french fries amid piles of garbage, washing it all down with filthy standing water from graffiti-strewn sheds, as a propane gas heater bursts into flames.

The City Council is currently drafting legislation for a permanent Open Restaurants program.