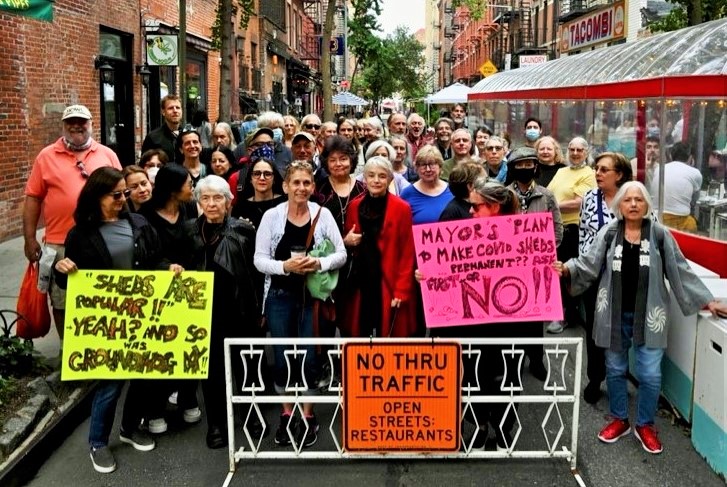 Members of the group Coalition United for Equitable Urban Policy NYC, or CUEUP, which opposes making the Open Restaurants program permanent, rallied in July. Some of the group's members are plaintiffs in the new lawsuit against the city over the program. (CUEUP)

A group of nearly two dozen concerned residents, most of them from bar- and restaurant-saturated Downtown Manhattan, are suing to block Mayor de Blasio’s Open Restaurants program from being made permanent.

The plaintiffs charge that the environmental assessment statement (E.A.S.) for the scheme is sorely deficient, or as they put it, “an arbitrary, flawed determination…that the proposed Permanent Open Restaurant program would have no significant environmental impacts citywide.”

The plaintiffs hail mainly from Greenwich Village, the East Village and Lower East Side, but also Chelsea, Hell’s Kitchen and Williamsburg, Brooklyn.

The lawsuit, known as an Article 78 because it challenges a city decision, is being filed in New York State Supreme Court. Representing the group is civil-rights attorney Michael H. Sussman.

According to the new lawsuit, many residents have suffered increased blight, noise, trash and congestion — as well as rodents — since the Open Restaurants program was launched 16 months ago during the pandemic. The group says the city’s finding that the program has “no adverse impacts” belies the reality on the ground, and needs further review as the city rushes toward making the program permanent.“I am honored to represent New Yorkers fighting to restore the city to normalcy,” attorney Sussman said. “Our sidewalks and streets belong to all the people, not those who own or rent bars or restaurants. People have a right to a quality of life. Making this program permanent without accountability would radically diminish the experience of many hard-working residents, sacrificing them and their neighborhoods. The city can do much better. Had the city conducted proper environmental reviews, not negated the experience of the last 16 months, the proposed expansion of the Open Restaurants program would be placed on infinite hold.”

“You have only to look around our neighborhoods to see the immediate effects of the Open Restaurants program on safety, health, sanitation and environmental issues,” said Micki McGee, a resident of the South Village and one of the plaintiffs. “With 11,950 restaurants participating in the program, that’s a 110-acre giveaway of public land. We need a real conversation on the use of our public space, not a set-aside for one industry.”

Sixteen months is enoughDuring the pandemic, residents rallied around workers and business owners in supporting the Open Restaurants program. But the group says, after nearly a year and a half of the temporary emergency program, it’s clear that the permanent program would be a disaster for city residents.“Hell Square on the Lower East Side got a whole lot hotter,” said Diem Boyd, a petitioner and the founder the LES Dwellers, a grassroots residents advocacy group. “The living conditions here are a warning shot for communities across the city about what happens to a neighborhood when bars, restaurants and landlords are favored over residents’ quality of life.”The plaintiffs declare that at the heart of their fight is “the occupation of New York City’s public spaces and the right to quality of life.”“I’ve lived in my house for 33 years,” said plaintiff Stuart Waldman, a resident of Bedford St. in the West Village. “I’m 80 years old. I always assumed, health permitting, I’d live out my life in my home. The city may make that impossible.”

The lawsuit includes summaries of each plaintiff’s negative experiences with Open Restaurants.

One plaintiff, a senior woman who hobbles about with a cane, says there is hardly any room on the sidewalk anymore for her to walk safely due to the expansion of outdoor restaurant seating — and that she sometimes is forced to inch along over subway grates, fearing that her cane will get caught in them.

Another plaintiff, the mother of a 17-year-old autistic son, says the boy is being forced to abandon his usual walking routes due to all the new dining sheds, and that all the zigzagging he must now do on the street — plus the increased crowds and noise — is making him disoriented.

Other plaintiffs complain of an increase in outdoor smoking under their windows, as well as amplified music — both live musicians and prerecorded music. Some of the petitioners say they are resorting to constantly running their TVs or air conditioners just to try to drown out the outside din.

Older residents say the explosion of outdoor dining sheds has robbed them of curbside access that allowed them to be picked up and droped off conveniently by vehicles and that it’s also now harder to get their medications dropped off.

“Many of the residents are elderly,” the suit states. “The loss of on-street parking has resulted in their inability to park close to their residences. Vehicles delivering food, pharmaceuticals, etc., to the residents now must spend time hunting for a parking space or resort to double-parking.

“Such double-parking results in traffic backing up on the narrow streets; exhaust fumes being emitted; emergency vehicles —
including ambulances and fire trucks, when needed, being delayed. These effects are significant.”

Since Open Restaurants started, Deborah Gonzalez, who lives in a multiracial Section 8 building at Stanton and Chrystie Streets on the Lower East Side, has noticed “a huge increase in noise, particularly at hours when she and her family attempt to sleep, a significant uptick in the rodent population, garbage, no street cleaning and an increased number of homeless people looking for places to sleep,” according to the lawsuit.

Loss of public space on her own block

“Due to the proliferation of sheds, Petitioner Gonzalez has lost space to sit, talk or congregate with neighbors on her own block,” the suit states. “While she used to be able to look down her block and see from one end to the other, now she can only see the sheds and sidewalk seating.”

On top of all that, someone set one of the sheds on Gonzalez’s block on fire.

Patrick Walsh, a 62-year-old teacher living on the Lower East Side, has to get up at 5:15 a.m. and “needs to be fresh to do his job,” the suit states, adding, “However, since implementation of the temporary Open Restaurant program, this has been nigh impossible as the constant barrage of noise has kept him up to four or five o’clock in the morning.”

Also being deprived of sleep is Walsh’s 16-year-old daughter due to “the outrageous noise that surrounds their building on three sides.”

Another plaintiff, Ellen Koenigsberg, 62, lives on Rivington Street with her 13-year-old daughter whom she adopted from Vietnam. She operates a tiny vintage clothing store on Ludlow Street, around the corner from her apartment.

“Almost every restaurant, bar, club, cafe and hole-in-the-wall fast-food place along Ludlow and Rivington has put out tables on the sidewalk or built sheds or both,” the lawsuit states. “As a small business owner, Petitioner Koenigsberg was not given the same outdoor real estate to build a pop-up store in the middle of the street during a global pandemic.

“Now that her neighborhood has become a shed shanty town, Petitioner Koenigsberg’s shop is hidden between two plywood sheds, one with dirty astroturf for the floor and the other an ugly box covered in graffiti.

“Potential patrons must walk through tables, chairs and crowds of people to try to get to her shop,” the suit states. “Patrons also must climb over heaps of garbage placed on the sidewalk in front of her business because sheds neighboring her store are blocking garbage pickup.

“In the morning in front of her shop, Petitioner Koenigsberg observes cigarette butts scattered everywhere. Her clothes and accessories smell like pot and cigarettes. … And oftentimes, there is vomit and urine in the doorway, which is, not easy for her to stomach. … The people coming to this petitioner’s neighborhood are arriving to party and hang out on the street.”

The lawsuit further describes how Stuart Waldman has been taking decibel readings of the clamor outside his windows, showing how it ratchets up from noisy weeknights to the even-noisier weekends:

“On weeknights, the decibel meter on Petitioner Waldman’s smart phone hovers in the mid-seventies, a number the meter lists as equivalent to vacuum cleaner inside his home.

“On weekends, the decibel meter on Petitioner Waldman’s smartphone routinely reaches 85, or the equivalent of a blender in a small kitchen.

“However, while a vacuum cleaner operates for perhaps fifteen minutes, and a blender for a minute or two, the noise beneath Petitioner Waldman’s window is a steady, maddening presence that goes on for hours into the night, causing him to feel like a prisoner in his own home and bringing on anxiety, depression and pure fury.”

The lawsuit says the environmental assessment statement for making Open Restaurants permanent was flawed, with required sections not filled out. For example, the E.A.S. says some existing laws will be “suspended and repealed” for the program, but then does not explain what they are.

The plaintiffs will hold a press conference on Thurs., Oct 21, at 11 a.m., at Ludlow and Rivington Streets.