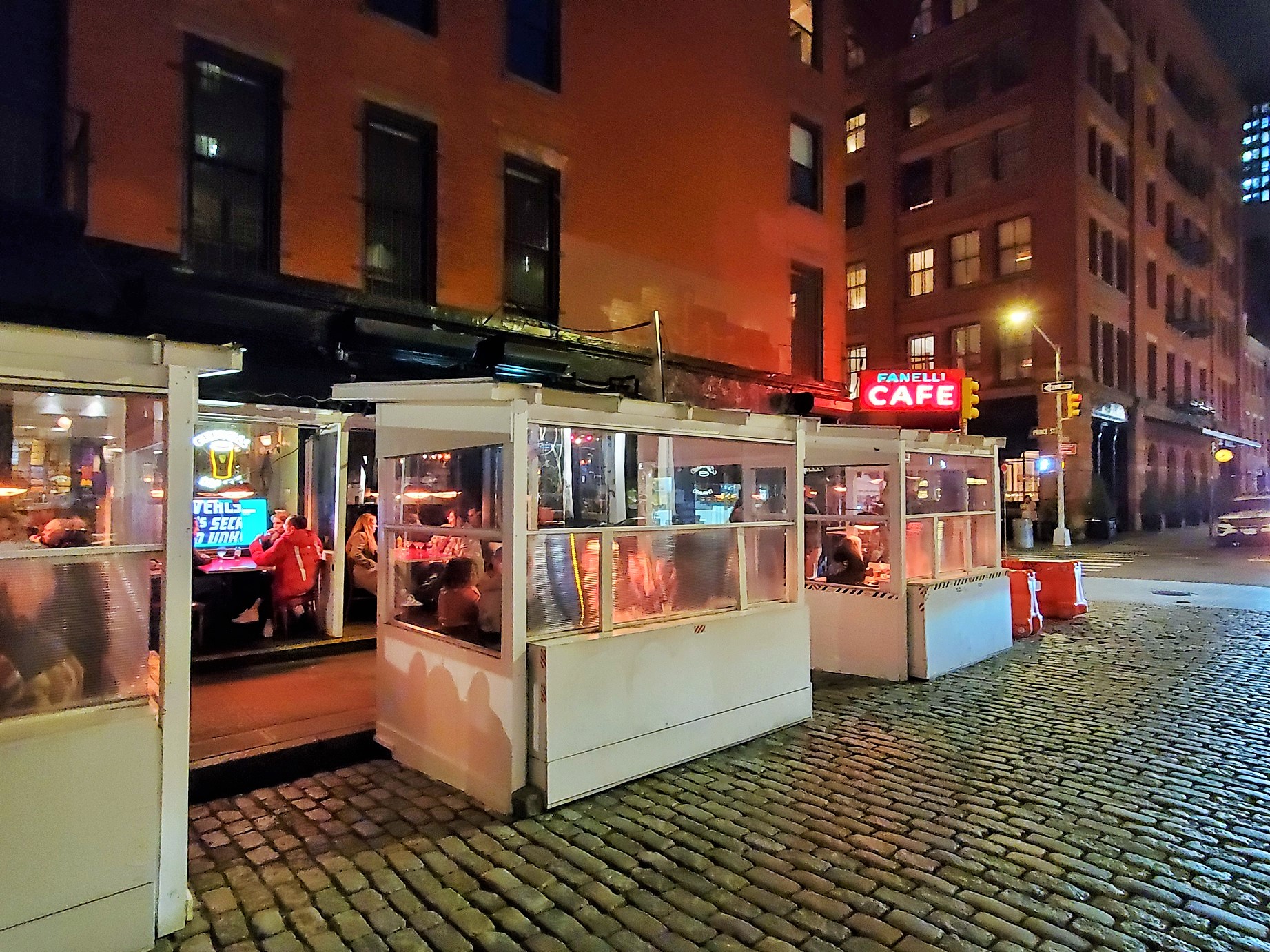 Sidewalk sheds outside Fanelli's bar, at Mercer and Prince Streets, were in use last week despite chilly weather. These separated shacks clearly can't be criticized for being one, overly long, continuous structure. Soho's zoning formerly banned sidewalk cafes. (Photo by The Village Sun)

The Council overwhelmingly voted to strip out all existing regulations for sidewalk cafes from the city’s Zoning Resolution and replace them with a new local law.

The deletion of decades-old, time-tested rules paves the way for a full overhaul of outdoor dining in New York City — including making permanent the contentious roadway dining sheds that have only been permitted due to an emergency executive order during the COVID pandemic.

The zoning text change’s main effect will be to wipe out any geographic restrictions on where sidewalk cafes can be located: Even quiet residential side streets will now be able to have sidewalk cafes if they have grandfathered commercial storefronts.

The vote was 43 yes to 6 no with 1 abstention. The no votes were cast by Councilmembers James Gennaro and Robert Holden, both Democrats from Queens; Ari Kagan, Darlene Mealy and Kalman Yeger, Democrats from Brooklyn; and Inna Vernikov, a Republican from Brooklyn.

The districts of the three councilmembers — Erik Bottcher, Christopher Marte and Carlina Rivera — representing Downtown and Lower Manhattan have the most roadway sheds of anywhere in the city, accounting for about 25 percent of the city’s total 12,000 sheds.

Both Marte and Bottcher gave qualifying statements before voting yes.

Carlina Rivera did not give a statement, only saying, “Aye.”

Meanwhile, the City Council is currently working on a new law, Intro 31, that will regulate the permanent Open Restaurants program. That law reportedly could be ready to be voted on anywhere from a month to three months from now.

A few hours before Thursday’s vote, Marte and Bottcher led Marjorie Velazquez, the chairperson of the Council’s Committee on Consumer and Worker Protection, on a tour of some particularly shed-heavy streets in Greenwich Village, to show her conditions that some local residents are fuming about. Velazquez is the Council’s point person in crafting the law for permanent Open Restaurants.

Last Thursday’s City Council vote, though, was specifically only on the zoning text amendment that governed sidewalk cafes. Yet, in their remarks before they weighed in on the issue, councilmembers largely discussed the roadway sheds.

Council Speaker Adrienne Adams said the Open Restaurants program and the ongoing pandemic-emergency suspension of sidewalk cafe rules not only saved businesses and thousands of jobs but also allowed many areas beyond Manhattan to enjoy outdoor dining. She indicated that local residents’ concerns would be taking into account during the drafting of Intro 31.

“We will work hard to balance the needs of restaurants and their local neighborhoods’ concerns,” Adams said, “by gathering feedback from the many stakeholders and neighborhoods across the city to ensure outdoor dining is equitable, better regulated and accounts for the many considerations in our respective communities.”

Bottcher, for his part, said, “We now have the opportunity to craft a program that keeps the best parts of the temporary outdoor dining program that has added so much vibrancy to the streets of our city while addressing the parts of the program that have been problematic. Today’s vote is only the first step in that process.”

In his remarks, Marte thanked both Velazquez and Rafael Salamanca, the chairperson of the Council’s Land Use Committee, “for being really open about what’s coming next” on the writing of Intro 31. However, he recounted some of the unsightly, unsanitary and unsafe conditions that he, Bottcher and Velazquez had seen earlier during their sheds survey.

“We saw 5-feet-tall piles of trash, dead rats, abandoned and broken sheds, cars and bikes not being able to go down the street and puddles of sludge — we think it’s sludge, it might be worse. What we’ve seen the past two years is that the temporary program has not worked. We’ve seen almost no enforcement or oversight, and so tension has risen between residents and small business owners.”

Marte stressed that the Council’s legislation on permanent Open Restaurants “must not take a one-size-fits-all approach.” He thanked Bottcher “for really being a partner in making sure that residents of Lower Manhattan are heard and that we can improve their quality of life.”

One councilmember, Darlene Mealy, who voted no, noted that just that morning she had been surprised to see someone selling clothes out of one of the dining huts.

“And that’s [a space for] parking,” she said, alarmed, noting that local residents are “practically sleeping in their cars” due to inability to find parking spots.

On the other hand, Mealy said that the previous, long-standing sidewalk cafe regulations “made sure that people didn’t take advantage of the outdoors.”

“My district don’t want it,” she stressed of Open Restaurants. “I know it did help a lot of restaurants… . With these structures…why not let it be on the sidewalk and not in the street?”

Some other councilmembers who voted yes on the text amendment nevertheless expressed concern about the program.

Chi Ossé granted that Open Restaurants was an “economic lifeline” to many small businesses.

“However, this program needs to ensure that our streets are for the people and not the rats,” he emphasized. “The rodent population growth has been undeniable and is clearly linked to outdoor dining, which we instituted more quickly than we could devise proper methods for sanitation. I support outdoor dining but we need to ensure that we do it right.”

In the same vein, he expressed concern about Mayor Adams’s proposed budget cuts to the Department of Sanitation.

Linda Lee noted that the community boards in her Queens district “have brought up a lot of issues with sanitation and quality of life” in connection with Open Restaurants.

Councilmember Gale Brewer related that she had been barraged with “100 e-mails” from concerned residents of her Upper West Side district about the roadway structures.

“I reject the inherent classism and the argument that restaurants should be prevented from operating outdoor dining structures because a few elite members of the community find them to be eyesores,” she scoffed.

It’s not just certain residents who oppose the sheds, though. More that 60 percent of the city’s community boards are against them, too.

Like Mealy, other councilmembers who voted no said their constituents are sick of the sheds and that it’s their job to represent the voters.

“The emergency time is passed,” Yeger said, “and what we’re considering today is the future. My job is to protect the neighborhood. And in my neighborhood, these sheds have taken over the streets in a very poor way.”

He also urged that the Open Restaurants program be removed from the oversight of the Deparment of Transportation, which, he said, “can’t get a speed bump put in on a street in three years.”