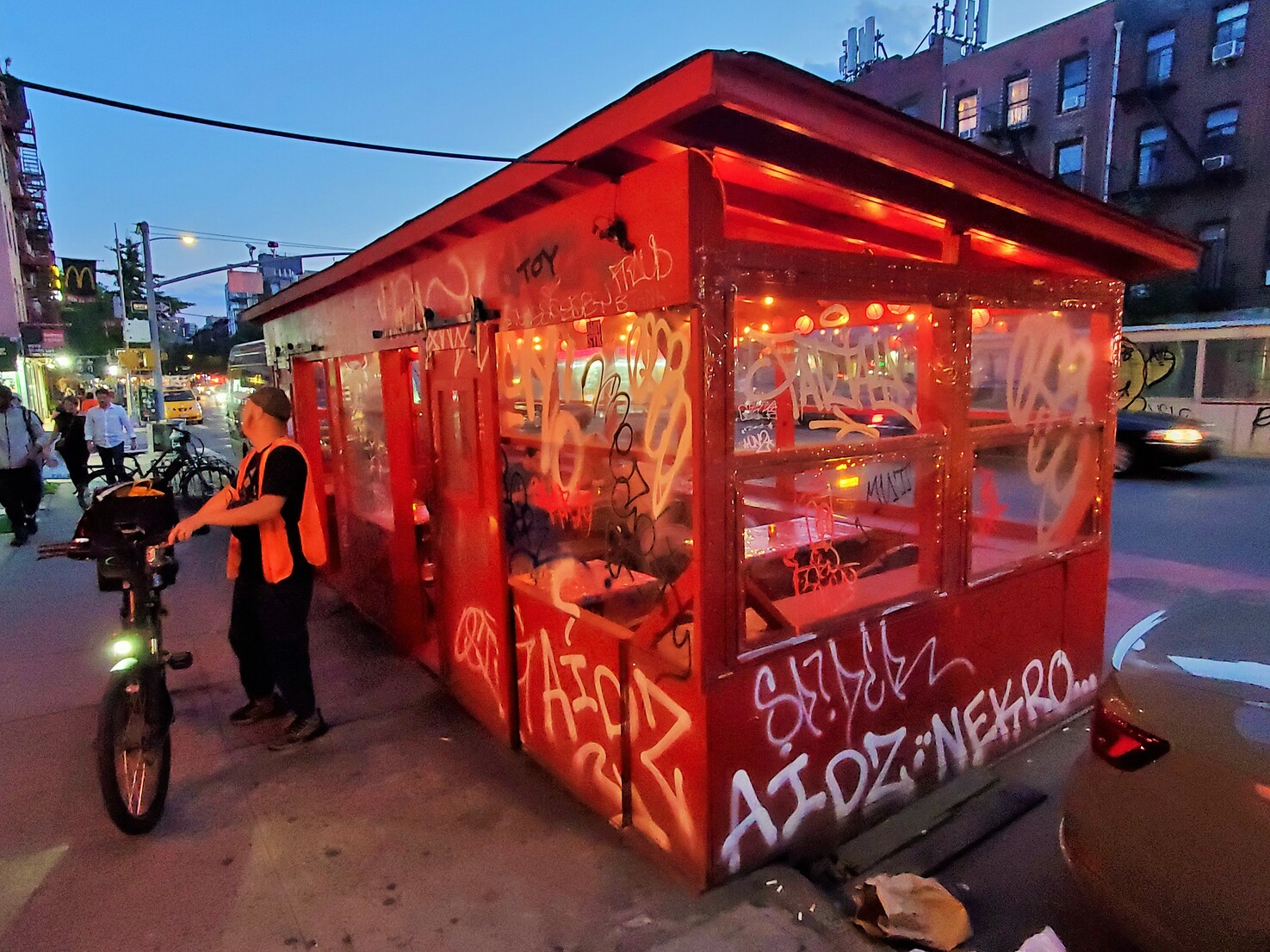 A graffiti-strewn dining shed on First Avenue in the East Village. (Photo by The Village Sun)

‘We want our streets back!’ Shed foes sue to shut down ‘lawless’ outdoor dining program — now

BY LINCOLN ANDERSON | Shed the sheds — as in, right now!

Residents from across the city have filed an Article 78 lawsuit to end the ongoing renewals of the emergency executive orders that authorize New York City’s temporary Open Restaurants program, and to end its operation.

Birthed under former Mayor de Blasio during the depth of the pandemic, the Open Restaurants program has been operating since since June 2020. According to the lawsuit, however, for more than two years, the supposedly temporary program “has circumvented both the zoning code and the New York City Charter through repeated renewals of emergency executive orders.”

Per the suit, the mayor’s and governor’s emergency orders that have kept extending Open Restaurants were initially based on the idea that “requiring social distancing” would “diminish the seating capacity” of restaurants and bars and that the program “could thwart the spread of COVID.”

However, this March, Eric Adams ended the Key to NYC vaccine requirement, which mandated that anyone over age 5 show proof of vaccination to enter various indoor venues, including restaurants.

As a result, the lawsuit notes, “In recent months, respondents’ chief executive officers and other leaders have relied upon an economic rationale for extending [Open Restauarants]. However, such a rationale does not provide a sufficient legal basis for an emergency order in New York absent the existence of an underlying public health or natural emergency, neither of which now exists.

“In reality, no public health emergency exists,” the suit argues, “and, therefore, there is no premise for [Open Restaurants].”

The litigation concludes by asking that the court “permanently enjoin operation of [Open Restaurants], require [the] City to revoke any permits now in effect allowing places of public accommodations to so utilize its sidewalks and streets, and enjoin any recommencement of [Open Restaurants] absent the declaration of an actual public health emergency… .”

A total of 35 residents — hailing from Brooklyn, the Bronx, Manhattan and Queens — are plaintiffs in the new suit. Representing the group is civil-rights attorney Michael H. Sussman, who is also pursuing a separate lawsuit against the proposed Permanent Open Restaurants program.

That other lawsuit won in State Supreme Court this past March, arguing that the city had failed to conduct a proper environmental impact study for Open Restaurants, a sprawling, new, citywide program with 12,000 roadway sheds all over the Big Apple, but with a disproportionate number in Downtown Manhattan. However, while the city is currently appealing that ruling, the sheds are still out on the street — and still driving their critics crazy. Hence the new lawsuit demanding an immediate stop to the program.

The outdoor dining program, the suit charges, causes “increased and excessive noise, traffic congestion, garbage and uncontrolled rodent populations, the blocking of sidewalks and roadways, causing petitioners and others to be unable to safely navigate the city’s streets and sidewalks, and a diminution of available parking upon which some of the petitioners depend.”

The outdoor seating scheme, with its thousands of dining sheds, “also continues to appropriate [a] substantial share of public sidewalks and streets for private use and profit,” the suit further states.

“Lawful conduct starts at the top,” Sussman said. “Public legitimacy depends on our leaders telling the truth. Executive orders extending the ‘temporary’ Open Restaurants program circumvent the law.  The city has failed to comply with the processes state and city law contemplates when programs of this magnitude are considered and, instead, fenced out public participation. Our second lawsuit is a frontal attack on this lawlessness.”

Many residents were supportive of restaurants during the health crisis that made temporary outdoor dining necessary. But the plaintiffs say that “the cumulative negative impacts” on their neighborhoods are destroying their quality of life, and that “the abuse of executive power must end.”

While New York State and City have suspended or abandoned all other pandemic emergency orders and programs — including test-and-trace, vaccine and mask mandates, home food deliveries for the elderly and shut-ins, and free hotel rooms for those with COVID who need to self-isolate, eviction protections and enhanced unemployment benefits — emergency orders “continue to be selectively issued for the benefit of the restaurant and nightlife industries,” the plaintiffs maintain.

Robert Camacho, the chairperson of Brooklyn Community Board 4, representing Bushwick, is one of three-dozen plaintiffs on the new lawsuit.

“Mayor Adams says the emergency is over,” Camacho said. “He says everybody’s got to go back to the office to work. He wants everyone back at their workplaces — and we want our streets back. We want the restaurants open, but we don’t want the sheds destroying our streets and neighborhood.”

Camacho said that, at one point, there were 40 abandonned dining sheds in Brooklyn C.B. 4. Working with the Department of Sanitation he got many of them removed, but there are still 15 to 20 of the vacant roadway eyesores, he said.

Patrick Walsh, a public school teacher and Lower East Side resident, is another plaintiff.

“The mayor’s decision to keep renewing an emergency order for the hospitality and liquor industry that is no longer needed serves as another reminder that residents’ quality of life and safety are not priorities, or perhaps, even seriously considered,” he said.

“The bars and restaurants have simply taken over the streets,” she said. “The willingness of politicians to allow this, at the expense of residents, harms the public at large, other businesses and the ability of residents to the peaceful enjoyment of our homes.”

Lower East Sider Deborah Gonzalez, an advocate for affordable housing and homeless services, said the condition of the streets is the real emergency.

“Our lives are being harmed and disturbed with every emergency renewal that allows the sheds and sidewalk cafes to park in our neighborhoods,” Gonzalez said. “The emergency order that needs to happen right now is for our streets to be cleaned up and made safe, permanent housing for the homeless and better subways.”

Also among the plaintiffs is David Gruber, a past chairperson of Community Board 2, which includes Greenwich Village. Gruber, among others, has repeatedly argued that a “one size fits all” approach for the Open Restaurants program has been a disaster, since the Village area has so many bars and restaurants compared to most other parts of the city.

In her affidavit for the lawsuit, plaintiff Angela Bilotti complains of an explosion of rats and noise associated with the proliferation of dining “shanties” in Williamsburg, Brooklyn.

“Pre-pandemic I enjoyed my neighborhood’s charm, clean and quaint tree-lined streets, parks and peacefully working in my garden,” she said in the affidavit. “Since the implementation of [Open Restaurants] the neighborhood has eroded. The sheds filling the streets have become nesting grounds for rats. Litter lines the streets as rats tear open the piles of trash left beside the sheds. Storm water collects at the shed walls, becoming mosquito breeding grounds, and the stench is horrendous. Street cleaning trucks are unable to do their job when sheds dominate the roads. Where I used to be able to smell the trees as I walk my dog, it now smells like decay and urine. Tree beds near sheds have gaping holes where rats have tunneled through to nest. During evening dog walks you can even hear rats fighting under the shed floors or they run across the sidewalk and street in numbers. Riding my bike means dodging rat roadkill. In my time here I’ve never lived with so much filth, stench and vermin. Some sheds are dilapidated or covered in graffiti. Some aren’t even used for dining but for storage behind locked doors. Many [exceed] the width of an automobile by a foot, making traffic very dangerous, especially the corner sheds which also block stop signs.

“Other quality of life issues have to do with the operation of the restaurants themselves,” Bilotti continued. “They fill the sidewalk with furniture making it difficult to pass, they install speakers and/or DJ’s outside, and in some cases a canopy of globe string lights hanging low enough to hit with your head. The noise levels from a combination of customers shrieking and music have made my home unlivable. When working in my garden, I can hear loud music coming from three different establishments clashing in the atmosphere. What used to be a sanctuary to escape to in this bustling city is now time spent filing 311 reports and battling rats which have found their way into my garden beds. Restaurant owners and managers are uncooperative. I’ve confronted a few, pleading for sidewalk clearance and reduced music/noise levels. Nothing changes. One restaurant owner told a neighbor she’s conducting business, so just close their windows. That neighbor moved away.”