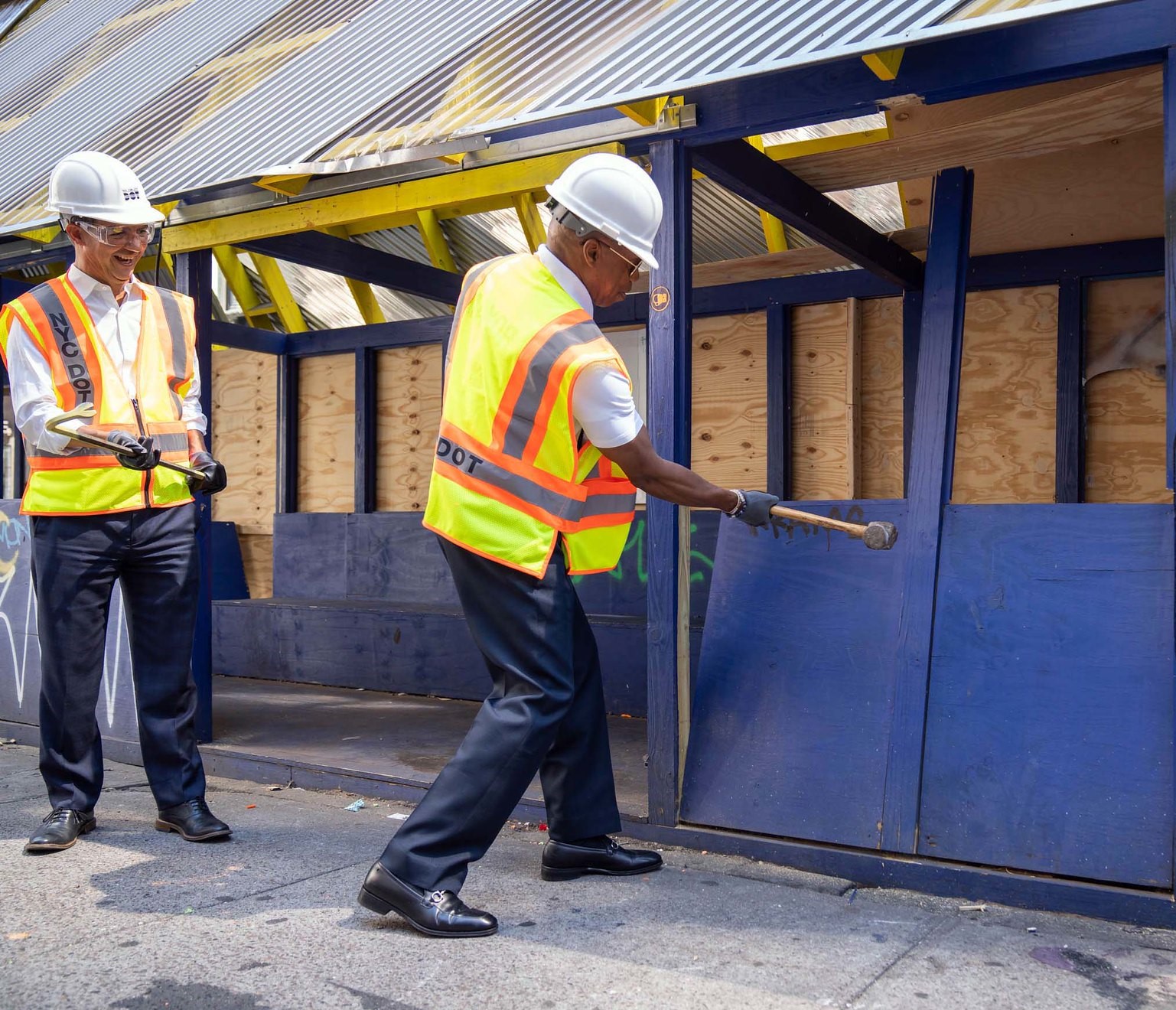 Mayor Adams did the honors of wielding the first blow in knocking down a derelict dining shed at W. 32nd Street and Fifth Avenue on Thurs., Aug. 18. (Photo by Ed Reed/Mayoral Photography Office)

BY THE VILLAGE SUN | Updated Aug. 19, 11 p.m.: On Thursday, Mayor Adams ceremoniously swung a sledgehammer and slammed down a (likely pre-cut) piece of plywood on an abandonned roadway dining shed in Midtown near the Empire State Building.

Posing with Adams while holding a crowbar, though not doing anything, was Ydanis Rodriguez, the commissioner of the city’s Department of Transportation. D.O.T. currently runs the city’s Open Restaurants program, but has been accused of doing zero enforcement of violations connected with it.

Along with his good-form, slugger’s swing, Adams announced “a new, multiagency enforcement initiative focused on spotlighting open and active outdoor dining sheds in the city’s Open Restaurants program and removing abandoned sheds…that have now shut down.”

However, CUEUP (Coalition United for Equitable Urban Policy), an ad hoc group leading the fight to clear the thousands of roadway dining sheds from the city’s streets, was only further fed up by the photo-op.

“Widespread problems with the current program will not be addressed by the removal of a handful of deserted structures,” the group fumed in a press release. “Although this is an important first step, it fails to address the issues of the widespread degradation caused by the out-of-control Open Restaurants program.”

One Greenwich Village-area shed opponent, requesting anonymity, speculated the mayor held the shed-whacking press conference because the Open Restaurants program itself has recently been taking a beating in the media.

In the past 10 days, there were 50 articles about the dining sheds, many of them negative, including the New York Post’s infamous article about a down-and-out twosome having sex in a Greenwich Village shed.

To top it off, last Thursday, “The Late Show With Stephen Colbert” riffed on the Post’s “shed sex den” story with a romantic Boyz II Men parody song for the show’s cold opening.

There are currently more than 12,550 Open Restaurants sites throughout the city.

Leslie Clark, a West Villager who is a leading CUEUP member, is a plaintiff in a legal action challenging the Open Restaurants program.

“If the city wants to make an improved or expanded sidewalk cafe program, we’re all for it. We’d love to be part of that discussion,” Clark said. “Communities throughout the city should have access to sidewalk cafes. But the temporary Open Restaurants program has become a blight on our city, and it needs to end.”

According to CUEUP, the mayor “continues to underestimate widespread public concerns over the lack of emergency-vehicle access, out-of-control nightlife activities, the assault on the public’s right of way on roadways and sidewalks, and the city’s failure to abide by the law.”

“What I want to see is the rule of law followed,” said attorney Michael Sussman, who has filed two lawsuits on behalf of local residents opposed to the continuing emergency program. “And I don’t want to see the city simply implement a very major program at the same time it’s claiming there are no environmental impacts.”

The lawsuits filed against the Open Restaurants program “aim to restore public participation in decision-making on the future of the city and its sidewalks and streets,” according to CUEUP.

Residents from Brooklyn, the Bronx, Manhattan and Queens last month filed an Article 78 lawsuit to end renewals of the emergency executive orders that authorize the city’s temporary Open Restaurants program — and to end its operation immediately.

In March, Sussman also prevailed in an earlier lawsuit in New York State Supreme Court that argued that the city failed to conduct a proper environmental review of the sweeping, citywide program. City Hall is currently appealing that ruling.

The Open Restaurants program has been operating since June 2020. According to CUEUP, for nearly 26 months, the allegedly “temporary” program “has circumvented both the zoning code and the New York City Charter through repeated renewals of emergency executive orders.”

The group’s latest lawsuit notes that all of New York’s other pandemic-emergency executive orders have been dropped except for Open Restaurants. As a result, the group says, there simply is no longer a health emergency to justify the program. Indeed, now the governor and mayor have shifted their justification for extending the program on a monthly basis to the neeed to help restaurants financially.

Meanwhile, local bar owners and restaurateurs, like Lorcan Otway, the owner of the East Village’s Theatre 80 St. Mark’s and the William Barnacle Tavern, say that Open Restaurants continues to be a much-needed lifeline for struggling operators.