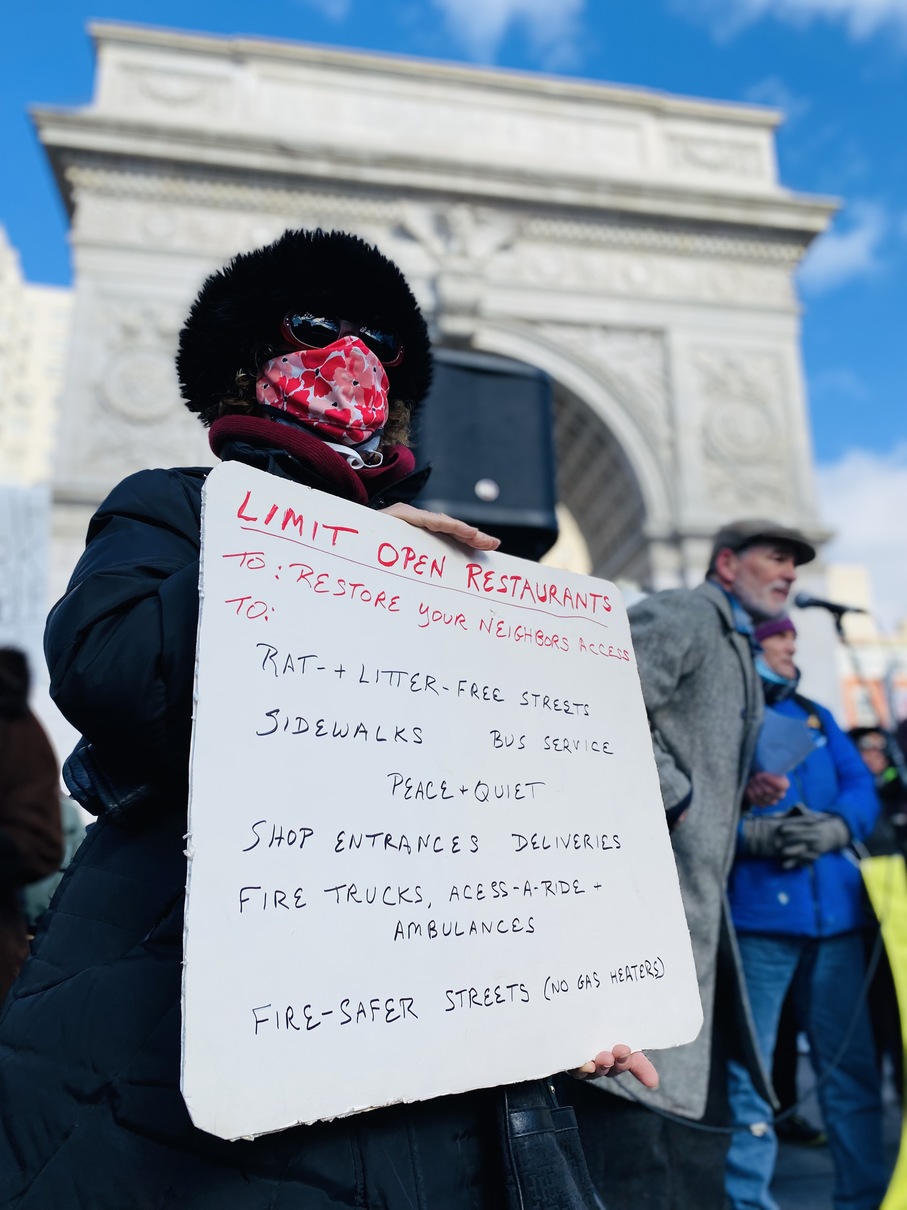 Protesters called for what they said is a much-overdo limit on Open Restaurants. (Photo by Chris Ryan)

BY LINCOLN ANDERSON | On a freezing Saturday afternoon, anger over the city’s ramshackle outdoor dining program boiled over at a march and rally in Greenwich Village.

Chanting “Chuck the sheds!” about 100 people marched from Father Demo Square, at Carmine Street and Sixth Avenue, to Washington Square Park for speeches near the arch. Saying the Open Restaurants program served its purpose when indoor dining was limited by the pandemic, the protesters declared it’s now high time the program ended. The scheme is a blatant giveaway to the hospitality and real estate industries, speakers charged.

The emergency plan — which has seen the city flooded with thousands of roadway dining sheds — launched 20 months ago. With the return of full indoor dining and the closure of some restaurants, though, many of the sheds now sit vacant in the cold weather or abandoned in disrepair.

The city, however, is now set to make the program permanent — plus wipe out all zoning restrictions on where sidewalk cafes can be located, even on quiet, narrow side streets. The City Council will hold its one and only public hearing on the sweeping citywide issue this Tues., Feb. 8, at 10 a.m.

Among the speakers at Saturday’s rally was Assemblymember Deborah Glick, who has been among the few politicians willing to speak out against the program. She noted that Open Restaurants supporters romantically say the street sheds make New York City “look like Paris.” Yet, she said, the City of Light has taken a more nuanced approach in its own approach to outdoor dining.

Glick noted that, in Paris, the outdoor dining areas must have “movable tables” and close at 10 p.m. and are allowed from the spring to the fall.

“All the people that hung their hat on Paris,” she scoffed, “their mayor said [the program] was for an emergency.”

According to news reports, Paris is also allowing “florists, book and record stores” to apply for the so-called “summer terraces.” Parisian businesses can reportedly also apply for an “annual terrace” that is open year-round, but can only occupy one parking spot, as opposed to the three parking spots in the seasonal program. Paris also supports the outdoor dining plan as a way to reduce car parking and private cars, in general, in the French capital — an idea shared by some backers of New York City’s sheds.

The assemblymember said Open Restaurants backes have tried to bully her on social media for daring to oppose the street-transforming plan.

“I still represent the people that live here — despite attacks on me in the Twittersphere,” she declared, as the crowd of local residents cheered in support.

The sheds, she added, also limit curbside access for deliveries, among other things, noting, “You can’t get a refrigerator or sofa delivered on a cargo bike.”

In addition, Glick charged that Open Restaurants represents a glaring lack of “equity.” Namely, the only people who use the sheds to dine out on a regular basis are those who can afford it.

The only other elected official besides Glick at the rally was new Councilmember Christopher Marte.

“There was a time and place for Open Restaurants,” he said. “That time is gone. We supported our small businesses when we needed to. These outdoor sheds are not long-term planning. We have to put pressure on our elected officials and our communities to get rid of these sheds.”

Marte said he has discussed the issue with Council colleagues and found common ground, though unlike him, “they don’t have 1,000 restaurant sheds” in their districts.

He noted how the sheds blocked a fire truck responding to a blaze on Thompson St. last year from being able to “open their door.”

“Seniors have to go around the block to get an Access-A-Ride” due to the dining structures blocking the curb, he added.

“We shouldn’t have to march and rally for our elected officials to be responsive to us,” she said. “When the city decided to make Open Restaurants permanent, the first call should have been to the residents.”

Fariello called on the city’s Department of Transportation, which is overseeing Open Restaurants, to do an “independent survey” of the program, as opposed to the widely ridiculed D.O.T. online survey, which allows people to respond an unlimited number of times.

Allie Ryan, who ran for City Council in District 3 last year, also decried the idea of making the sheds permanent.

“Even though I lost that election, I continue to advocate for the sunset of Open Restaurants,” she said. “It’s no longer needed. Two years later, we’ve learned about COVID. Indoor dining has returned. It is time for New York City to regain its sidewalks and streets.”

Ryan said the sheds make the streets unsafe, cause litter and rats, and, when abandoned, “promote an image of urban decay.” She said she’s tired of having to bike around an increase of “fresh rat roadkill and trash” that she chalks up to the sheds.

Ryan noted that, now that it’s winter, many of the sheds are fully enclosed, defeating the point of the program, which was to create well-ventilated seating areas during COVID.

“They just occupy public space to expand their public seating,” she said of the structures.

Her opposition to Open Restaurants is partly driven by its impact on her own living conditions in the East Village. A mother with two young daughters, she said their apartment windows face two restaurants with large sheds, one of which closed just a month ago, though its unused shed remains. Even with their windows closed, the din is disturbing.

“We can still hear atonal ‘Happy Birthday’ singing while we’re trying to go to bed,” she said.

Leslie Clark, a leader of the West Village Residents Association, accused former Mayor de Blasio of a despicable “bait and switch” when, in September 2020, he abruptly declared that the only recently launched Open Restaurants would now become permanent. The City Council followed suit.

“How could a city be taken over in a democracy by one and only one industry?” she asked, incredulously.

De Blasio launched the emergency program, she said, “and then came the bait and switch, four months later…the De Blasio Debacle, the Alfresco Fiasco. … One [public] hearing, it was done. The plan? To do away with all zoning to give away the streets to just one industry.”

Indeed, now the City Council will be voting to wipe away zoning regulations for sidewalk cafes as part of the long-term effort to make Open Restaurants permanent.

There were also some speakers from outside the Village area who called for reining in the sheds. Leslie Boghosian Murphy, a Community Board 4 member from Hell’s Kitchen who ran for City Council last year, said the program needs to be brought under control. Also speaking was Robert Camacho, chairperson of Bushwick’s Community Board 4.

“Shut those sheds!” he chanted to start.

Echoing Glick, Camacho said not everyone can afford to eat in a pricey outdoor dining spot.

“Listen, I’m not buying a $15 cup of coffee,” he stated, adding, “You’re pushing away the people that made the community what it is — us! Eventually, we’re all going to be priced out.”

Meanwhile, the 34-year community board member said, “Most of them that eat in the sheds don’t live in the community.”

He said the outdoor sheds in his neighborhood are filled with “rats, crackheads, dog feces, people living in them, hiding in them. How can you eat inside of these when you got dog feces in them?” he asked. “Where is the Health Department?”