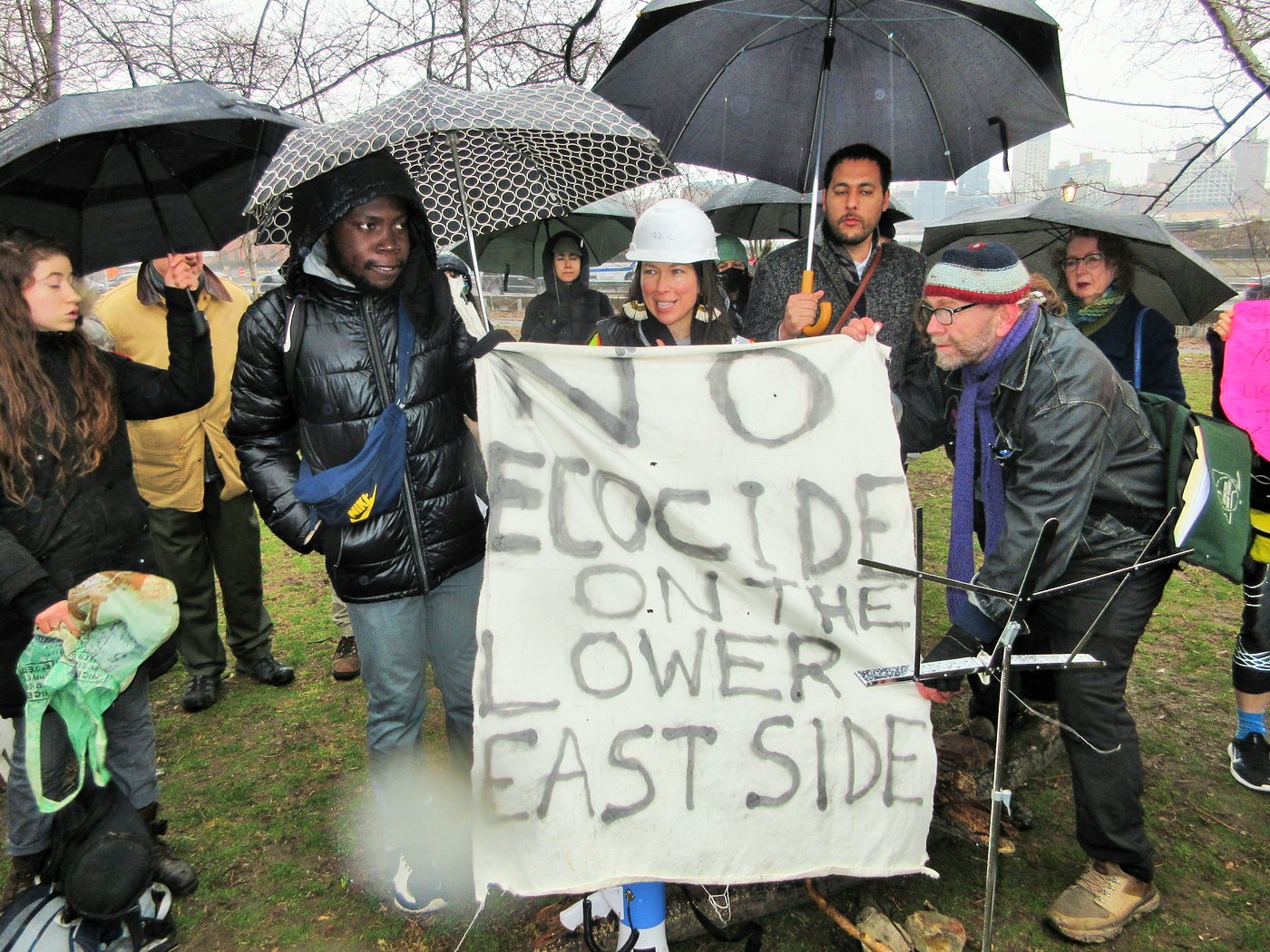 BY DASHIELL ALLEN | At a January community board meeting Lower East Side and East Village residents were surprised to learn that trees in Corlears Hook Park would be cut down as soon as February.

According to information from the Department of Design and Construction, a large section of the park, including the old bridge over the F.D.R. Drive, would be closing imminently as part of the city’s East Side Coastal Resiliency project, which involves raising the entire park by 8 to 10 feet.

Friends of Corlears Hook Park, the nonprofit that maintains the green space, shared back in 2020 that a large section of the green space would need to be closed at “the pathway along the F.D.R. where an interceptor gate will be buried near the ball field, as well as new sewer piping that will transfer any rain and floodwaters out of the neighborhood as necessary.”

At the time, the nonprofit estimated that about 30 trees would be cut down — and it was unclear when or where they would be replanted.

Due to the piping and interceptor gate, the city stated at the time that no new trees would be replanted in the area.

Additionally, the Corlears bridge to the now-demolished amphitheater is set to be replaced, requiring even more trees to be cut down in the area known as Cherry Hill.

D.D.C. sent out a community advisory last month, stating that the “partial closure of Corlears Hook Park” would begin on Feb. 28. Since then, the date has been pushed back three times — first to March 7, then to March 14 and then to Mon., March 21, leaving the activists to wonder if it was due to a lack of “tree work permits,” which they say D.D.C. admitted to not having last week.

On Wednesday morning East River Park defenders gathered to express their outrage at the imminent work.

“E.S.C.R. is ecocide. E.S.C.R. is a land grab,” said Emily Johnson, a Native American land and water protector from the Yup-ik Nation, who lives on the Lower East Side. She slammed the resiliency plan as the “deforestation of Manahatta.”

“This is catastrophe,” she said. “This is criminal. We all here know that community is real resiliency. We all deserve green space, trees and flood protection.”

The activists support a previous plan that they say would provide flood protection without involving the park’s destruction.

Johnson called on Joseph Kocal, the director of Manhattan forestry at the Parks Department, to “halt all tree permits on E.S.C.R. Project Area One, and disclose all of the tree work permits that have been given up until now.”

Moving forward, the activist hopes Kocal can facilitate a “collaborative process” with the community to mitigate the damage of cutting down an eventual total of 1,000 trees.

“We’re lucky it’s raining today, because otherwise that toxic soil [containing mercury] blows over here every day,” Johnson said, pointing to the now-leveled southern portion of East River Park. “It is killing us every day.”

“No ecocide on the Lower East Side!” the crowd chanted. “Not one more tree!”

“My son is already complaining that some of these animals are coming,” said Sandy Charles, a nearby resident. “We saw possums in the neighborhood because they don’t have anyplace to go. So we’re not thinking about the animals.

“We are neglectful to us as humans,” she said. “We are all born on this planet to embrace, live and enjoy land. The park does not have to be destroyed for you to have good flood protection.”

Councilmember Christopher Marte stood beside the activists in the park on Wednesday.

“They wanted to be here two weeks ago to take down these trees,” he said of the hard hats. “And when we called them out to say that they didn’t have the permit to do so, and more importantly that they don’t need to cut down these trees, they pushed back. And now they’re gonna try again next week. And what we’re gonna do is continue to push back because we can’t kill any more trees.”

At the same time, Marte expressed “hope” in the new mayoral administration, hoping it would “correct the wrongs” made in the past.

On Jan. 21 Marte sent a letter to D.D.C. Commisioner Thomas Foley requesting air monitoring throughout East River Park. The letter noted that “the construction has been operating behind closed gates, so residents are understandably worried about whether any mitigating measures have been implemented to offset the air quality damage.”

Marte also pointed out that, at the same time trees at Corlears Hook Park and East River Park are being cut down, all five borough presidents released a plan last month to plant a “million more trees” over the next decade, calling trees “essential infrastructure.”

At Wednesday morning’s protest, Jasmin Sanchez, a current candidate for state Assembly and a lifelong resident of the Baruch Houses by the East River, expressed her anger at E.S.C.R.

“Everyone always says that environmental justice and climate change is not a Black and brown priority or issue, and they have erased our voices,” she said. “I am here to say that is false. We are here because they are destroying our park, they are cutting down our trees.”

Sanchez stressed that the work is not providing immediate protection from the kind of coastal flooding that hit East River Park and bordering residential areas during Hurricane Sandy 10 years ago.

“I am a lifelong public housing resident,” she said. “My [housing] development was affected by Sandy and I saw the water coming in. I saw the importance of having these trees, the shrubs, everything to preserve my community. And now what I’m seeing is that this plan does not even offer the safety that my community needs and they are just destroying this park without running air monitor controls, soil testing — without even doing racial impact studies to how the destruction of this park will affect low-income Black and brown communities. And for me,” Sanchez said, “that is problematic.”

Kathryn Freed, a former city councilmember and judge who also lives in a complex bordering the park, agreed with Sanchez.

As well as their daily meet-ups in East River Park at Houston Street, the grassroots group A Thousand People A Thousand Trees is planning a mass gathering in Corlears Hook Park on Mon., March 21, the new date for tree-cutting and demolition work to commence.