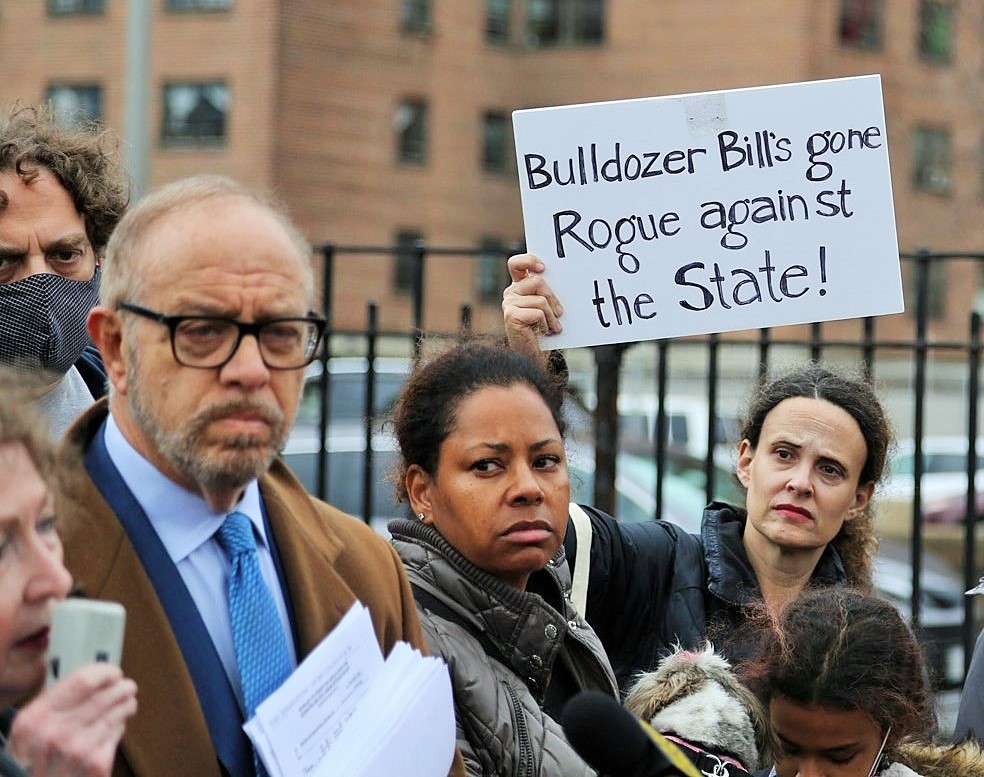 Attorneys Arthur Schwartz and Kathryn Freed, at left, spoke out against the East Side Coastal Resiliency plan at a rally at the Stanton Street construction fence in the park on Sat., Dec. 11. (Photo by Jefferson Siegel)

BY LINCOLN ANDERSON | A Court of Appeals judge on Thursday made quick work of legal challenges to the East River Park resiliency project.

As fast as hard hats have been felling the park’s venerable trees, Justice Rowan D. Wilson chopped down an appeal of the lawsuit East River Park ACTION et al v. the City of New York. He also denied a motion for a stay to block the park work, rejecting the plaintiffs’ lawyers’ arguments as “academic.”

Co-counsels Arthur Schwartz and Kathryn Freed had charged that Mayor de Blasio was in contempt of court, arguing that the park destruction was continuing in the face of a stay, or temporary restraining order (T.R.O.), that they contended was still active. But since Wilson ruled there was no stay, he also tossed out the contempt motion.

Wilson — whose first name, ironically, is a species of tree —issued a terse, three-sentence decision: “Motion for leave to appeal denied. Motion for a stay dismissed as academic. Motion to hold respondent in contempt denied.”

The lawsuit argued that the multiyear project could not proceed unless the state Legislature first voted to “alienate” the park, meaning to take it out of public use for an extended period of time.

The Court of Appeals is the state’s highest court. The lawsuit had lost at two lower-level courts.

At word of the decision, park activists gathered on the steps of the Abrons Arts Center on Grand Street to commisserate.

“This whole process has been shameful,” Schwartz said, angrily, after the decision. “It has never been necessary to destroy the park in order to get flood protection for the people of the Lower East Side.

“Tens of thousands will lose a local park for the next five to seven years, maybe more. Trees which clean our air won’t be replaced in their current glory for 50 years. The park will never again be the beautiful, historic place it currently is.

“This will be one more blight on Bill de Blasio’s legacy in this city,” Schwartz said. “I hope he is happy with his ‘win,’ which the community never bought into.”

“We lost,” Freed said, dejectedly. “And they didn’t even give an explanation. Usually, they do. We brought up a question of law. So they either didn’t want to deal with it or they don’t think it’s a matter of law or they might have decided it’s just a bit of a mess and they just avoided the whole thing.

“They really do seem to have it in for Lower Manhattan — between the Soho/Noho [rezoning] and the park,” she reflected. “No one even talks about Chinatown [part of which is in the rezoning]. … We did what we could,” she said.

As for a letter that is going around accusing the resiliency-project opponents of Jan. 6-like violence, plus arson, Freed was incensed.

“What violence?” she said. “They’re the ones who killed trees! No one hit anyone. It’s getting as bad as the Republicans. It’s polarizing. We’re going to have to live with what they wanted. So why are they yelling? Why the demonizing?”

Councilmember Carlina Rivera, who supports the E.S.C.R. project, did not immediately respond to a request for comment on the Court of Appeals decision.