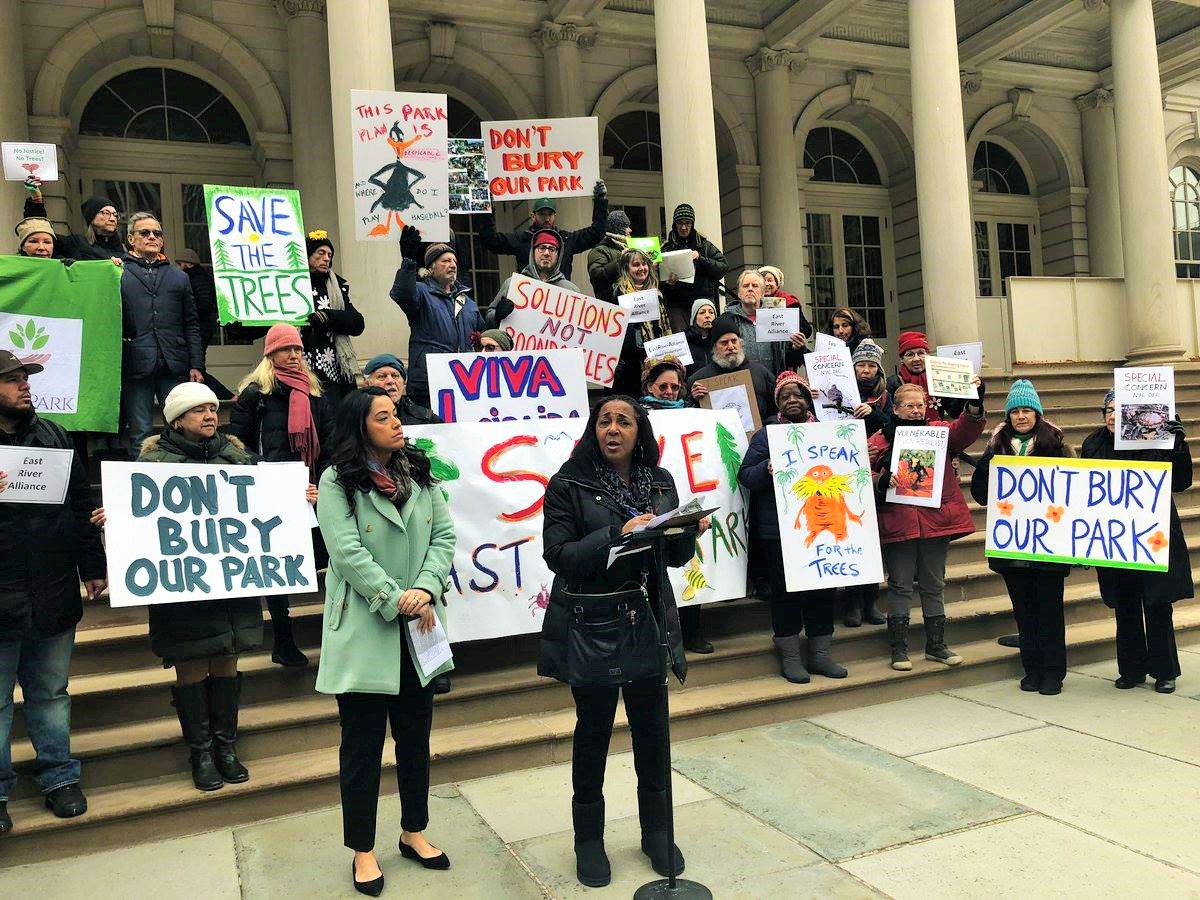 BY HOWARD BRANDSTEIN | Deconstruct the video of the “Frontline Communities Coalition” rally on Dec. 18 and what you see is an image makeover for supporters of the de Blasio plan that is now obliterating East River Park despite wide community opposition.

It is certainly interesting how speakers at the rally evade the history of this controversy with repeated shouts of “no more delays.” In their view, opponents of the plan are to blame for this, not the Frontline members’ surrender to de Blasio’s scheme, which nullified four years of planning and participation by hundreds of community residents, many of them people of color, and the work of multiple architectural and design firms. One would be surprised to learn that GOLES, the rally’s organizer, was the lead community agency in this Department of Housing and Urban Development (HUD)-funded initiative during the years 2014 to 2018.

Had the earlier community plan moved forward, we would now be far along in the construction of flood protection for our Lower East Side and East Village neighborhoods. It is true that opponents of the current plan delayed construction for about one month as a result of obtaining a court-ordered temporary restraining order. But it is also true that supporters of the de Blasio plan enabled delays of more than TWO YEARS while the city started from scratch to design its new plan and publicize it in a whole new round of meetings and negotiations with community stakeholders.

In misdirecting their blame for construction delays, rally speakers not only focused their ire on alleged disruptive outsiders but raised the specter of environmental racism in the opponents’ actions. The emergence of the phony trees-versus-people debate reappears, but this time in the language of a “non-resilient” park that offers no protection to frontline communities of color, and which therefore must be destroyed for a new “resilient” park. The history of the rally organizers’ own actions in abandoning the state-of-the art community plan is erased along with the NYCHA Speaks petitions opposing the de Blasio plan, which were signed by about 2,000 New York City Housing Authority residents, largely people of color.

Earlier statements by some supporters implying that NYCHA residents did not have the ability to distinguish between two flood-control plans, one of which completely destroys the park, is of course deeply racist. One cannot point to any accounts of petition signers in mostly white communities (for example, opposing the Noho/Soho rezoning or 250 Water St. tower) being characterized as unable to comprehend what they were signing.

It’s important to bear in mind that the actual effectiveness of the flood-control component of the community plan (a landscaped berm running along the western edge of the park) relative to the flood protection offered in the de Blasio plan was NEVER AT ISSUE. It was the “externalities,” i.e., the closure of one lane of traffic on the F.D.R. Drive, protection of Con Ed power lines and a limited Parks Department budget that were proffered as reasons for canceling the community plan.

These points have been extensively debated, but suffice it to say that, fundamentally, the de Blasio plan solidifies the current climate-wrecking, fossil-fuel energy paradigm, even as we face catastrophic climate change. Spending $1.5 billion on so-called “resiliency” and zero dollars on actual mitigation of pollution and greenhouse emissions does not bode well for the health and well-being of frontline NYCHA residents nor our collective survival.

The struggle over the plan for East River Park mirrors the larger national debate around the direction of planning in our new age of climate chaos. Will we continue to fight the last war (Hurricane Sandy) and view flood control solely from the lens of infrastructure “needs”? Or will we strive for something far more comprehensive, such as a Green New Deal that connects infrastructure with the larger issue of climate change? Biden’s infrastructure and Build Back Better legislation was an important, albeit modest, step in this direction. The sabotage of the latter bill by Joe Manchin reduced Biden’s legislative vision to the sound of one hand clapping.

De Blasio (our local Manchin), in canceling the earlier plan for East River Park, similarly torpedoed the community ethic that working with nature and not against it is our best hope of dealing with the climate crisis. Saving as many trees as possible, expanding the park by decking over the F.D.R. Drive and addressing greenhouse emissions from the 130,000 cars traveling the Drive every day might just be a better approach.

Instead half the park is now a wasteland and dead zone. Every plant and animal that made that piece of the park their home is destroyed because, as one supporter declared at a Community Board 3 meeting, “people are more important than trees.”