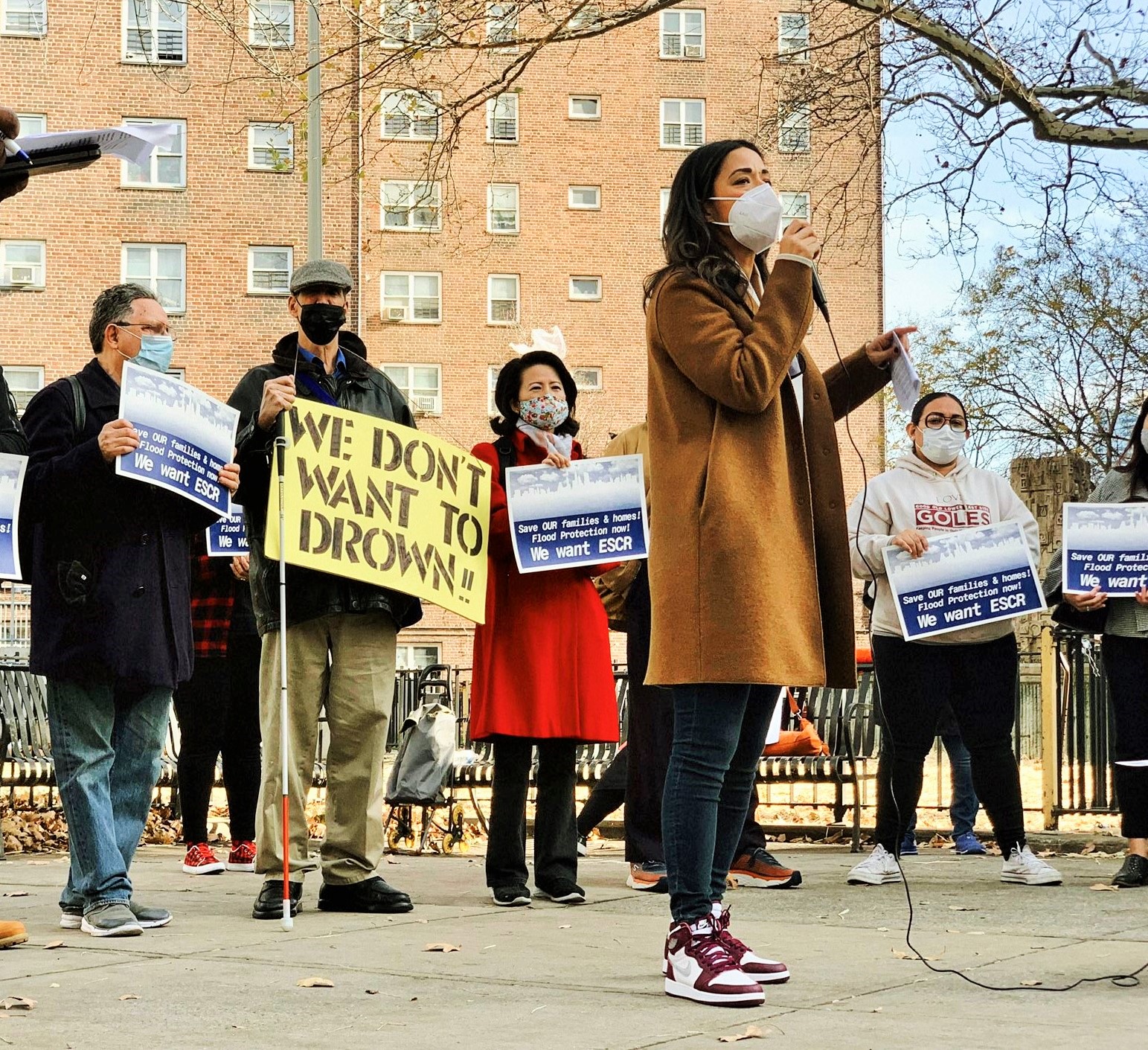 BY LINCOLN ANDERSON | Opponents of the East River Park resiliency plan have been making lots of noise lately. Though, admittedly, it’s been hard to hear them at times over the angry roar of chainsaws and bulldozers destroying the historic park’s trees.

At a Friday rally, Councilmember Carlina Rivera, local public-housing leaders, housing advocates and politicos clapped back. Pumping up the volume on their end, they declared that the opponents don’t speak for the community — at least not the one most directly impacted by Hurricane Sandy’s flooding nine years ago. The name of the ad hoc group behind the rally, the Frontline Communities Coalition, expresses the idea of being the ones hardest hit.

As much as the speakers trumpeted the resiliency plan, they trashed the protesters, branding them as outsiders, racists, liars, even crazed Jan. 6-like rioters and arsonists. Meanwhile, Christopher Marte, the incoming District 1 city councilmember, was mocked as a tree-hugger.

The day before the rally, a Court of Appeals judge had tossed out the opponents’ lawsuit that argued the state Legislature never authorized the drastic $1.45 billion megaproject.

But the clearing of the potential legal roadblock didn’t deter the plan’s supporters from their scheduled speak-out. They gathered between the Jacob Riis Houses and Lillian Wald Houses, in the E. Sixth Street oval between the F.D.R. Drive and Avenue D.

The East Side Coastal Resiliency plan is set to raise the 50-acre park by up to 10 feet — but not before first killing all of its nearly 1,000 mature trees, some 80 years old. Speakers at the rally said it’s tough to lose the park, but that flood protection is a life-and-death matter and critical for the neighborhood’s future safety.

Starting things off, District Leader John Blasco, a former Rivera staffer, took a shot at Marte, who stands with the E.S.C.R. opponents.

“Sadly, we have a new councilmember who, all he has done, is talk about protecting the trees,” Blasco said. “So, what about our lives?”

“We are trying to get flood protection and we deserve a beautiful, renovated park,” said Damaris Reyes, the executive director of GOLES (Good Old Lower East Side), a local housing organization. “We all care so much about our park that we want to ensure that, every time there’s a flood, our park does not get destroyed. We also want to build a resilient park. Sometimes you need sacrifices for the greater good of the entire community — not just a select few,” she pointedly stressed.

Reyes, who lives in the Baruch Houses, recalled tromping up the stairs of the high-rise East River housing developments during Sandy’s power outage to bring people life-saving supplies.

“But sometimes we didn’t arrive in time,” she said. “Today I’m here for those people that we lost.

“If you care about resiliency,” she said. “If you believe that climate change is real. If you understand that we are susceptible to sea-level rise and storm surge, you will stand here with us and you will say, ‘We need flood protection now. Not tomorrow, not in 10 years. We need it now.'”

Also speaking was David Garza, the executive director of the Henry Street Settlement, a nonprofit social-service agency. He similarly recalled how his staff had to walk up “21 stories” to deliver food to the elderly and others trapped in their apartments after Sandy.

“We need the protection,” he said. “We need the safety. We need to forget about the politics.”

After speeches by leading local advocates, Rivera herself gave remarks. She noted that she had started out as an organizer with GOLES.

Despite being vilified by some for backing the park-killing plan, Rivera has staunchly stuck by it, calling it the best long-term solution.

“We urgently need and deserve reliable flood protection,” she told the group in the oval. “I was here when this exact spot was under feet of water. I remember when there was so much hurt and so little help.”

She recalled how, in the wake of Sandy’s disaster, a new group, LES Ready, was formed to help plan the way to a safer, better-prepared future.

“We fought for a state-of-the-art park,” she said, “just like they have on the West Side, just like they have in Battery Park. We will fight for this park and we will not stop fighting. The families we have here are multigenerational and they’re not going anywhere.”

She closed with a spirited cheer of “Viva Loisaida!”

Activist Ayo Harrington said she was glad the rally was telling “another narrative” of the park struggle, noting how the media lately has been solely focusing on the protesters.

“For far too long there have been people who have been the only voice, the only ones the media is covering and the politicians are listening to,” she charged.

“Environmental racism is definitely well and alive as it relates to the East Side Coastal Resiliency project,” she said. “We have a small section of our community telling us that they know what’s best for us.

“Some of the people who have done everything possible to stop the project — so-called progressives — they have been so underhanded, so mean, so racist,” she accused. “They distributed racist pictures of Carlina Rivera and [Councilmember] Margaret Chin. … It’s time to let them know: You don’t speak for Black and brown people. No more f—ing delays! Protect our home and our families right now!”

(The Rivera posters called her and Bill de Blasio “Destroyers of East River Park” and, though unflattering, were not racist.The Chin posters, created by National Mobilization Against Sweatshops, or NMASS, caricaturized her as a “Chinzilla” monster destroying the Lower East Side through gentrification and overdevelopment.)

“I didn’t see those other people who are crying and screaming to save the trees and the bees. Where were they?” Napoleon wrote. “They were not here with us and GOLES counting all those trees that were cut from [the grounds of] NYCHA.”

Michael Schweinsburg, the president of the 504 Democratic Club, a political club whose members are disabled, didn’t ease up on recent over-the-top comments against the E.S.C.R. opponents. He repeated accusations from an e-mail that was sent out promoting the rally that noted Rivera’s home club, Coalition for a District Alternative, supports E.S.C.R.

Schweinsburg approvingly recounted how one grassroots group, East River Alliance, won concessions in connection with the resiliency project, including the planting of “thousands of trees” to counter the loss of the park’s existing ones.

“Along comes this other group,” he said. “They are very well-funded and we just don’t know the motive behind it…certainly, some political…but certainly a well-funded operation that is based on lies and distortion. Also, they’re a group that employs tactics that remind me of [the Capital riot on] January 6. The other day we saw violence against police while [the protesters] were trying to fight at the fencing. It looked like January 6. And they employ tactics like arson and the rest of it. The distortions they offer are so misleading, put up by our local press as being fact.”

“There’s a group of activists who want to speak for public-housing residents,” he said. “[They are] mostly not Black or brown communities. They do not speak for us. Let’s be real: You need to get anti-racist. You need to step back. Step back and let this project move forward. I’m damned if I’m going to let them decide the fate of this community and of public housing residents here.”

Jenny Low, the runner-up to Marte in this past June’s District 1 Council primary election, and is a member of Chinatown’s United Democratic Organization, also stood with the pro-E.S.C.R. contingent.

“This is a victory for the residents in our neighborhood,” she declared of E.S.C.R., “those who have suffered so much from Hurricane Sandy. We can represent ourselves just fine. We do not need outsiders to tell us what we want.”

The Village Sun asked Marte for his response to Blasco’s charge that Marte is putting trees over people’s lives.

“It’s sophomoric to say that you either want to save nature or save human lives,” Marte scoffed. “Thousands of Lower East Siders were extremely vulnerable to COVID because of the asthma they have from living in this area. These conditions will now certainly worsen. Today’s rally was beating a dead horse, and if its participants would like congratulations for destroying a park, I am happy to say congrats. Generations of New Yorkers will remember and mourn what was lost. I hope as the city inevitably drags out the process of building a new park, that John shows the same enthusiasm he did when the city was chopping down thousands of mature trees.

“I wish I knew why this plan was chosen,” Marte continued. “Not the excuses, but why this plan to destroy our park was funded, when 2 miles from here in Battery Park they just opened a beautiful, resilient playground filled with native plants that are designed to absorb floodwaters. I don’t know if E.S.C.R. went ahead because of a failure of leadership, blatant corruption or some combination of the two. But I know our fight was not in vain.”

Meanwhile, for their part, the park activists claim the leadership of the Housing Authority developments does not necessarily speak for their tenants. They contend many of the tenants either don’t support E.S.C.R. or are unaware it will wipe out their backyard park for at least five years of construction and probably more, and that it will fell all the park’s soaring trees, which will be replanted with smaller ones that will take years to reach mature height.