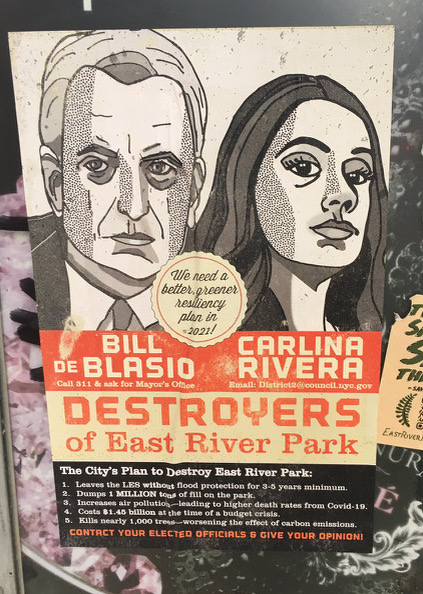 These posters recently started appearing around the East Village and Lower East Side. (Photo by Harriet Hirshorn)

BY HARRIET HIRSHORN | As a Lower East Side resident active in the fight to save East River Park, I wanted to share with you the posters that have been turning up around the East Village and Lower East Side accusing Bill de Blasio and City Councilmember Carlina Rivera of being “Destroyers of East River Park.”

Though the pandemic has put open space at a premium, work on the massive East Side Coastal Resiliency project has already started at Stuyvesant Cove Park — just east of Stuyvesant Town — where fencing will block off sections of the park.

Meanwhile, a bit farther to the south, 60 percent of the 1.2-mile East River Park could be closed by early next year. However, if the city’s Department of Design and Construction does not find a contractor soon enough, then East River Park would not be closed until this coming spring or summer.

De Blasio and Rivera pushed hard to get approval of E.S.C.R. last year and to start construction despite strong local opposition. Under the resiliency project, East River Park would be buried under 8 to 9 feet of dirt to raise it above the floodplain.

But opponents say flood control can be achieved without demolishing the entire 81-year-old park. They support the “green alternative,” a far simpler approach, under which an earthen berm would be built along the east side of the F.D.R. Drive. This actually was the original, community-approved design for the project.

The E.S.C.R. project’s opponents note that it would not provide any interim flood protection during the three to five years or longer of construction that it would take to complete.

Community activist Jasmin Sanchez discovered these posters — in English and Spanish versions — and wrote on Instagram (@JasminSanchezNY): “Our community have made it clear that we don’t want the East River Park destroyed. So-called progressives endorsing wannabe candidates need to get your facts straight. No allies here! Communities of color are at risk! Backdoor deals are to blame.”

It was not immediately clear who created the posters, which have a bit of a Shepard Fairey style.