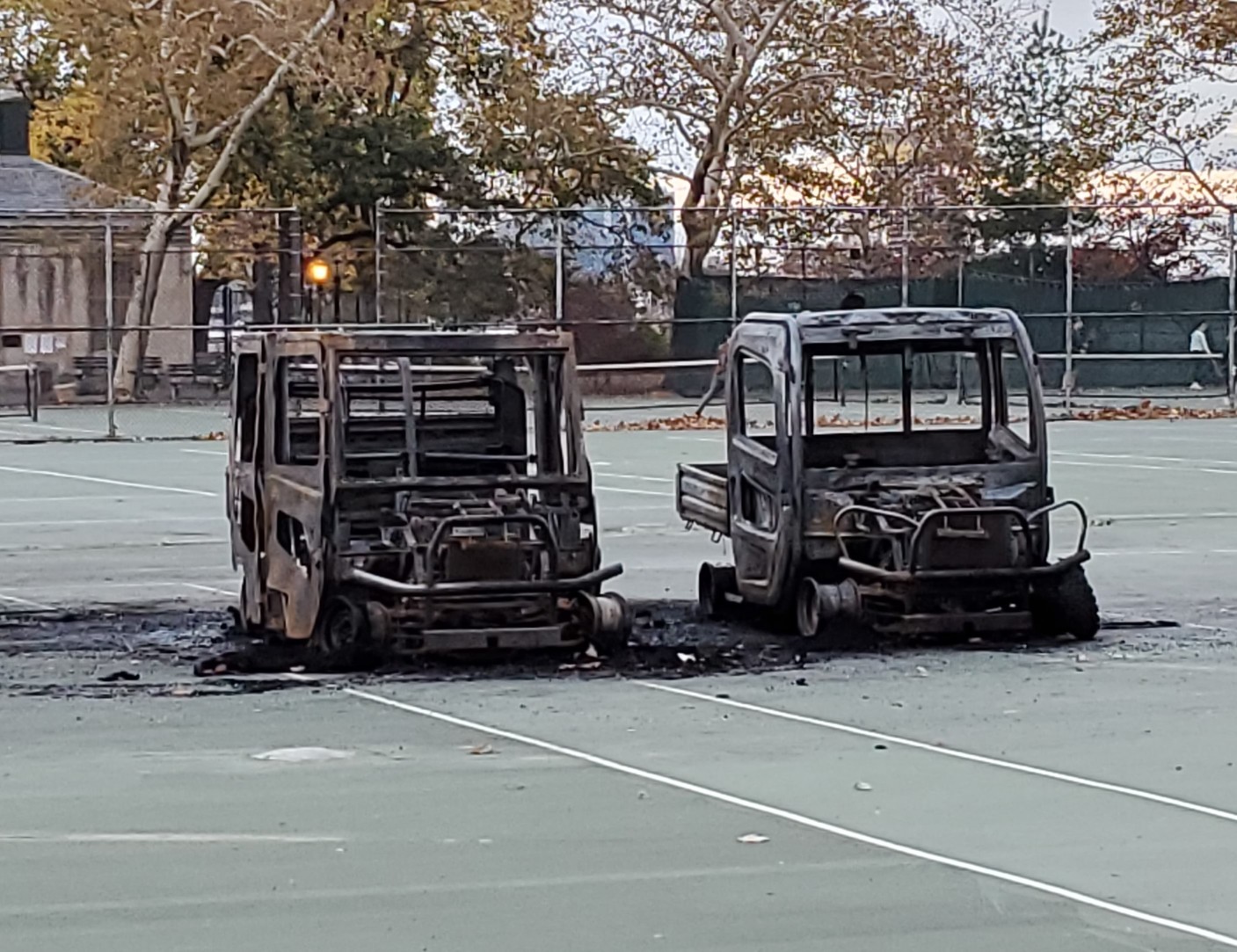 Two golf carts were set on fire in the closed-off area of East River Park on Friday night. (Photo by The Village Sun)

BY THE VILLAGE SUN | Passions have been flaring over the city’s contentious plan to bulldoze East River Park for an anti-flooding project. Last Friday evening, a pair of golf carts in the park also flared.

Around 11:30 p.m. on Nov. 12, flames were seen shooting into the sky as the two mini-vehicles, parked on the tennis courts at the Brian Watkins Tennis Center, were consumed by a raging orange blaze.

The burned-out golf carts still sat on the courts on Sunday afternoon.

A video of the incident was posted on the Citizen app. Police did not issue a media report on the incident and, apparently, no arrests have been made in connection with it.

Pending an Appellate Division court decision on an appeal on a community lawsuit, a temporary restraining order remains in effect halting any work in East River Park for the planned East Side Coastal Resiliency project. The city’s embattled $1.3 billion plan would destroy the entire 60-acre East Village/Lower East Side waterfront park and its nearly 1,000 trees in order to raise the park 8 feet to 10 feet above the floodplain.

On Mon., Nov. 1, the first day of scheduled “phase work operations” for E.S.C.R., workers arrived at the tennis courts and started sawing down the nets’ metal posts. Park activists, including City Council candidate Allie Ryan, staged a protest at the tennis courts, with Ryan and one other woman getting arrested. Three days later, Arthur Schwartz, the attorney on the community lawsuit, secured the temporary restraining order blocking further work.

Currently, eight tennis courts have been closed off while four remain open for play. Sunday afternoon, Dan Fitzpatrick, a young West Village resident, arrived toting his racket over his shoulder to get in a game.

“It sucks,” he said. “We heard they’re going to close the courts for three years.”