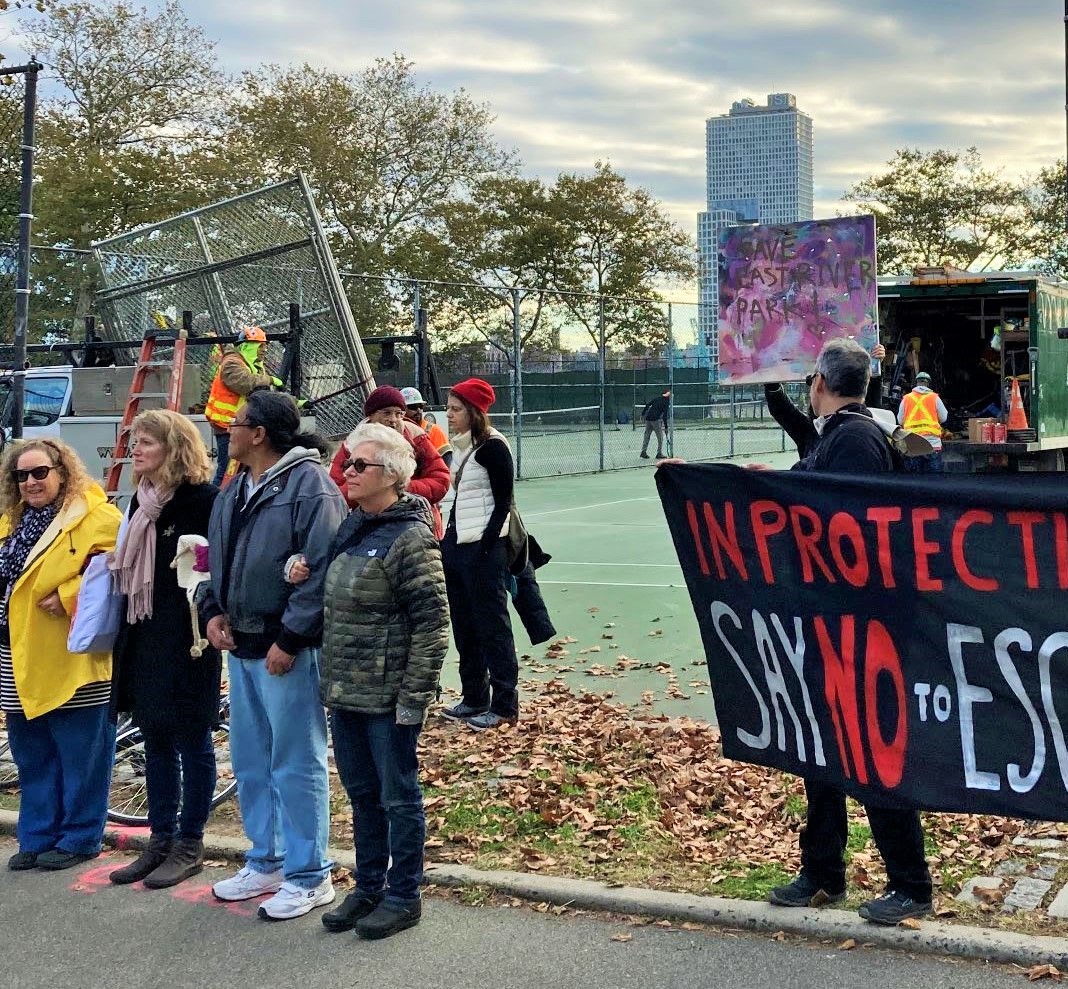 BY THE VILLAGE SUN | Hold your horses — and your chainsaws!

The Appellate Division on Thursday granted a temporary restraining order on demolition work in East River Park that will remain in effect through at least next Mon, Nov. 8.

Justice Judith J. Gische, one of the five judges on the Appellate Division panel, wrote, “The application for a TRO [temporary restraining order] staying construction pending determination of the underlying motion is granted. The motion is marked expedited.”

Gische ordered that the city file its response papers by noon on Fri., Nov. 5. The plaintiffs must, in turn, file their reply by Mon., Nov. 8, at 10 a.m.

Arthur Schwartz and his new co-counsel on the case, former Councilmember and judge Kathryn Freed, are representing scores of local plaintiffs in a lawsuit to stop the city’s East Side Coastal Resiliency project, which would destroy the existing East River Park in order to raise and rebuild it above the floodplain.

“Getting the stay is a great sign,” Schwartz said. “The city said that serious work in the park would start on Thanksgiving, and Judge Gische was concerned. The city lawyer said that our case was frivolous. The judge didn’t think so, or we would have lost.”

Schwartz and Freed are arguing an appeal on the lawsuit, which lost in court more than a year ago. Their argument is that the only reason E.S.C.R. is being done is to turn the park into a massive levee to protect the surrounding community from coastal flooding, and that, thus, it’s not really a park project per se. As a result, the opponents say, the state Legislature must first conduct an “alienation” vote — which has not been done yet — in order to formally allow East River Park to be removed from park use during the construction work.

In fact, city officials brag that the $1.3 billion, five-year-long E.S.C.R. plan will be the most ambitious urban coastal-resiliency project in the entire world — as in, much more than a typical park renovation job.

Assemblymember Harvey Epstein and state Senator Brad Hoylman have previously said they strongly feel the resiliency project should have an alienation vote in Albany, but reportedly it’s up to the city to call for one.

Work officially started on E.S.C.R. on Mon., Nov. 1, as hard hats began sawing down the fencing around the park’s tennis courts north of the Williamsburg Bridge. Park activists, including City Council candidate Allie Ryan, rushed to the tennis courts early Monday morning to do civil disobedience, and Ryan and another protester were arrested.

A community advisory on the E.S.C.R. project says that “phased work operations” — including “closures within the park and pedestrian detours to accomodate equipment transport and construction fencing” — started Nov. 1.