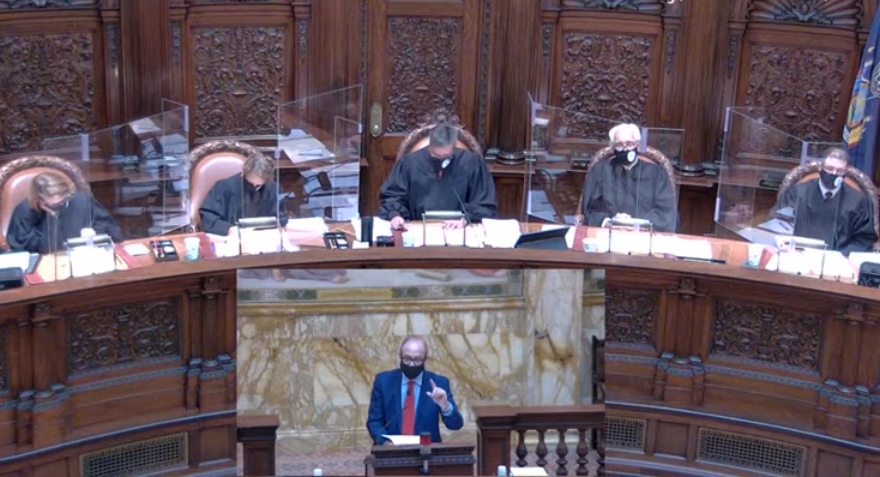 Arthur Schwartz argued an appeal on the community lawsuit against East River Park on Oct. 27. The photo is a screengrab from the livestream.

BY LINCOLN ANDERSON | East River Park is dying — at least that’s according to an attorney for the de Blasio administration who is fighting a community lawsuit over the fate of the 60-acre park.

Park activists, though, couldn’t disagree more strongly with that spin, and are continuing to battle against a first-of-its-kind resiliency megaproject that really would kill the existing waterfront park.

On Wednesday afternoon, Village activist attorney Arthur Schwartz was in court at the Appellate Division to argue an appeal on the lawsuit seeking to block the city’s East Side Coastal Resiliency plan. The massive scheme would bury East River Park under tons of landfill to raise it 8 feet to 10 feet, destroying the 82-year-old park — with its nearly 1,000 mature trees — so that it could be rebuilt above the floodplain.

More than a year ago, last August, a State Supreme Court justice ruled against the lawsuit, denying Schwartz’s request for a restraining order to stop the work from starting.

According to the attorney, it now appears demolition for the $1.3 billion megaproject would begin in “late November,” when the park’s tennis courts north of the Williamsburg Bridge would start being dug up. But he said all the dates about the project are very vague.

However, park activists say that, according to the E.S.C.R. Web page, “phased work operations,” including “closures within the park and pedestrian detours,” are scheduled to start Mon., Nov. 1. As a result, they plan to gather at the East River Park amphitheater at sunrise that morning to show solidarity against the project and are asking others to join them.

In court, Schwartz argued that E.S.C.R. needs to undergo an “alienation” vote by the state Legislature. Basically, under this doctrine, if a public park is to be used for other than a park purpose, state lawmakers must vote on whether to allow it.

Schwartz, though, charged that, in order to skirt an alienation vote in Albany, the de Blasio administration switched how it defines the resiliency project. He said that, at first, City Hall claimed E.S.C.R. was being done to turn the park into a giant levee to protect the surrounding residential communities from flooding. But then the city more recently switched things up, he said, by saying the project was really being done in order to protect East River Park itself, with the added benefit of protecting the surrounding community.

“For the first five years that they said they were going to do berms in the park by the F.D.R. [Drive], they said they needed alienation,” he said. “Now they are trying to sidestep alienation.

“If all that was being done here was to fix the park, we wouldn’t be here,” Schwartz said.

An earlier resiliency plan that had community buy-in only called for building berms along the park’s western edge, not elevating the entire park.

Some members of the five-member judicial panel grilled the attorney on why E.S.C.R. having a “dual purpose” — rebuilding the park for the future, plus protecting the neighborhood from flooding — would not exempt it from an alienation vote.

But Schwartz responded, “We say the principal purpose is [to create] a floodwall. The secondary purpose is to protect the park. … You can’t use a park for some other purpose that’s not a park,” he insisted of the alienation concept.

Meanwhile, Schwartz said an alienation vote would have major benefits, such as bringing much-needed legislative “oversight” to the resiliency project, which would help more firmly establish its parameters, including its timeline for completion.

Following Schwartz’s line of thinking, one of the justices then grilled the attorney representing the administration, asking her to clarify, “One billion dollars would not be spent just to protect the park?”

“Yes, probably not as much” would be spent if it was classified as a purely park project versus a dual park-and-resiliency project, the city attorney conceded.

However, she quickly added, “Only things that have no connection to a park purpose require approval [by the Legislature].” Then she added, “The park is dying as we speak.”

The city attorney further claimed that saltwater is “killing everything” in the park whenever the park floods, implying that the park is regularly suffering from coastal flooding. However, the last severe coastal flooding to hit Manhattan — and the reason for E.S.C.R. in the first place — was Hurricane Sandy nine years ago. The park has not been flooded from the East River since then. Plus, most park users would say it’s in good shape — hardly dying.

He noted that during Sandy, Battery Park and Lower Manhattan were flooded, too.

“The water was 12 feet high in Hudson River Park,” he added, noting the West Side waterfront park was underwater during Sandy. Yet, he said, it would be “absurd” to think that Hudson River Park would be razed to rebuild it above the floodplain — not only because the park is barely more than 20 years old, but also because of an environmental equity issue, Schwartz contended. In other words, he implied, unlike East River Park, the city wouldn’t dare try to destroy Hudson River Park on the tonier West Side.

“This happens to be a plan which is next to one of the poorest neighborhoods in Manhattan, lined with NYCHA houses,” he said of E.S.C.R., referring to the public housing complexes bordering the F.D.R. Drive in the East Village and Lower East Side.

A justice tried to pinpoint what the real point of E.S.C.R. is.

“So you’re saying that the protection to the neighborhood is an incidental purpose [to protecting the park]?” a judge queried the city attorney.

“They’re both important,” she replied.

Meanwhile, Schwartz scoffed that the prior alienation case the city is citing as precedent is “Petrosino” — namely, a case where the city defeated a community lawsuit seeking to block a Citi Bike station from being installed on part of the tiny traffic island of Petrosino Park in Soho.

Speaking afterward, Schwartz said the Appellate Court usually renders its decision in one or two months.

In addition, he told The Village Sun he plans to file a second East River Park lawsuit, based on a concern raised about E.S.C.R. by Comptroller Scott Stringer.

As previously reported, in July Stringer declined to sign off on the contract for E.S.C.R. due to a number of questions he had about it, returning it to the Department of Design and Construction so that the agency could address these.

One of the issues Stringer flagged was that the city is only requiring the project to be 16 percent locally subcontracted to MWBE, or Minority and Women-owned Business Enterprises, in violation of city regulations requiring 30 percent MWBE subcontracting. Alhough the city, for some reason, set the bar nearly 50 percent lower than its usual requirement, the contractor itself has said the job could be 32 percent MWBE subcontracted. Yet the mayor plowed ahead and signed the contract anyway.

Schwartz said he plans to file this new lawsuit imminently. He added he thinks his co-counsel on the case will be Kathryn Freed. The former judge and Lower Manhattan city councilmember, who recently retired from the bench, is “returning to the legal world,” he said.

A former longtime Soho resident, Freed moved to the Grand Street co-ops on the Lower East Side after being elected a judge. Asked at a rally in August against the Soho/Noho rezoning what she thought of the East River Park resiliency project, she said she is firmly against it.

“Yeah, why are they destroying my park?” she fumed. “One hundred-year-old trees and they’re just going to throw dirt on it [and bury it]?”