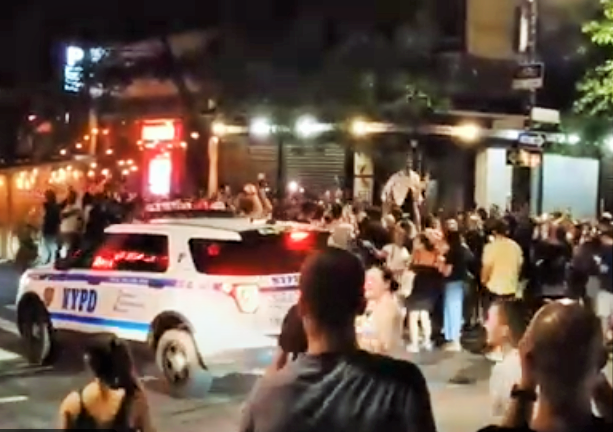 Hell Square sinks to a new level of hell

BY DIEM BOYD | It is not hyperbolic when we tell you that the residents in the three-block-by-three-block area bounded by Essex, Allen, Houston and Delancey Sts. on the Lower East Side live in a kind of perpetual hell. You have seen the videos, photos and read the press coverage over the years. But, what is happening now is unconscionable.

The pre-COVID reality was already unbearable with more than 100 beer, wine and liquor licenses, mostly with 2 a.m. to 4 a.m. closing times, and mostly bars, lounges, clubs and “clubstaurants” contained within this tiny boundary.

The hordes of drunks habitually puked, screamed and urinated on our homes and places of business. Cars with souped-up sound systems cruised by over and over again, shaking our windows and waking our children. There were street brawls with fists and knives.

There were heaps of 311 calls with response times that took hours, often into the next day, when beleaguered residents received the now-ubiquitous pro forma response, “The Police Department responded to the complaint and with the information available observed no evidence of the violation at that time.”

The post-COVID world has produced a new variation of hell. Hundreds of transients and transplants without a scintilla of decency pour out of the bars, clubs and outdoor party sheds — lured by a roving street deejay — and mob our streets, in what is akin to an illegal occupation (and this is not any less hyperbolic).

The activity on our nighttime streets, which were already overwhelmed by late-night liquor licenses before, has now doubled in size and capacity, with outdoor sports bars, lounges, nightclubs and after-hours clubs. The outdoor party sheds are the proverbial nail in the coffin, inviting open chaos. A few weeks ago, a car did a burnout for so long that acrid smoke from its spinning wheels filled the air, setting off fire alarms in nearby businesses and causing utter mayhem in the streets.

Our tiny streets are flooded with more shrieking Barbies, grunting bros prowling and fist-pumping the air, bass-boosted cars, urine and vomit. Booze and drugs sniffed, shot up and smoked are used openly on the street and from parked cars.

Why are the police not policing? Why is the New York State Liquor Authority not enforcing? Why are these outdoor party sheds still here?

While we can’t answer any of these questions with authority, we can answer that Community Board 3 continues to give out liquor licenses — with 4 a.m. closings and deejays — like candy.

We can answer that Community Board 3 ignores the 500-Foot Law and the basic right of residents to live peacefully in their homes and on safe streets.

According to C.B. 3, it has no choice but to approve all liquor licenses, albeit with “stipulations” (often toothless and ineffective), and ignore the 500-Foot Law in Hell Square because of an unspoken understanding that the State Liquor Authority, with very few exceptions, will license our neighborhood anyway.

Suppose this is, in fact, the policy being directed to C.B. 3 by the Liquor Authority. In that case, it is only fair that the public is aware that the linchpin for all the liquor-license approvals in Hell Square is based on this explicit understanding.

There is no point for residents to seek redress from C.B. 3 or the S.L.A. The 500-Foot Law — which factors in the quality-of-life conditions, adverse history of the premises and the applicant, and the number of existing liquor licenses within 500 feet — is clearly no longer the legal standard applied to Hell Square.

The only redress we can seek is from our elected officials, who are tasked to serve us. We ask that you prioritize the public safety and health of the residents, including children and the elderly, who live here. If nothing is done regarding enforcement and policing, and if the unspoken mandate is for C.B. 3 to continue to license this area into oblivion, we can expect more mayhem, chaos and violence.

Hell Square is a failed economic policy, failed governmental policy and failed police and enforcement policy. Things are on course to end badly and tragically if the residents are left out to dry.

Boyd is a member, Lower East Side Dwellers.