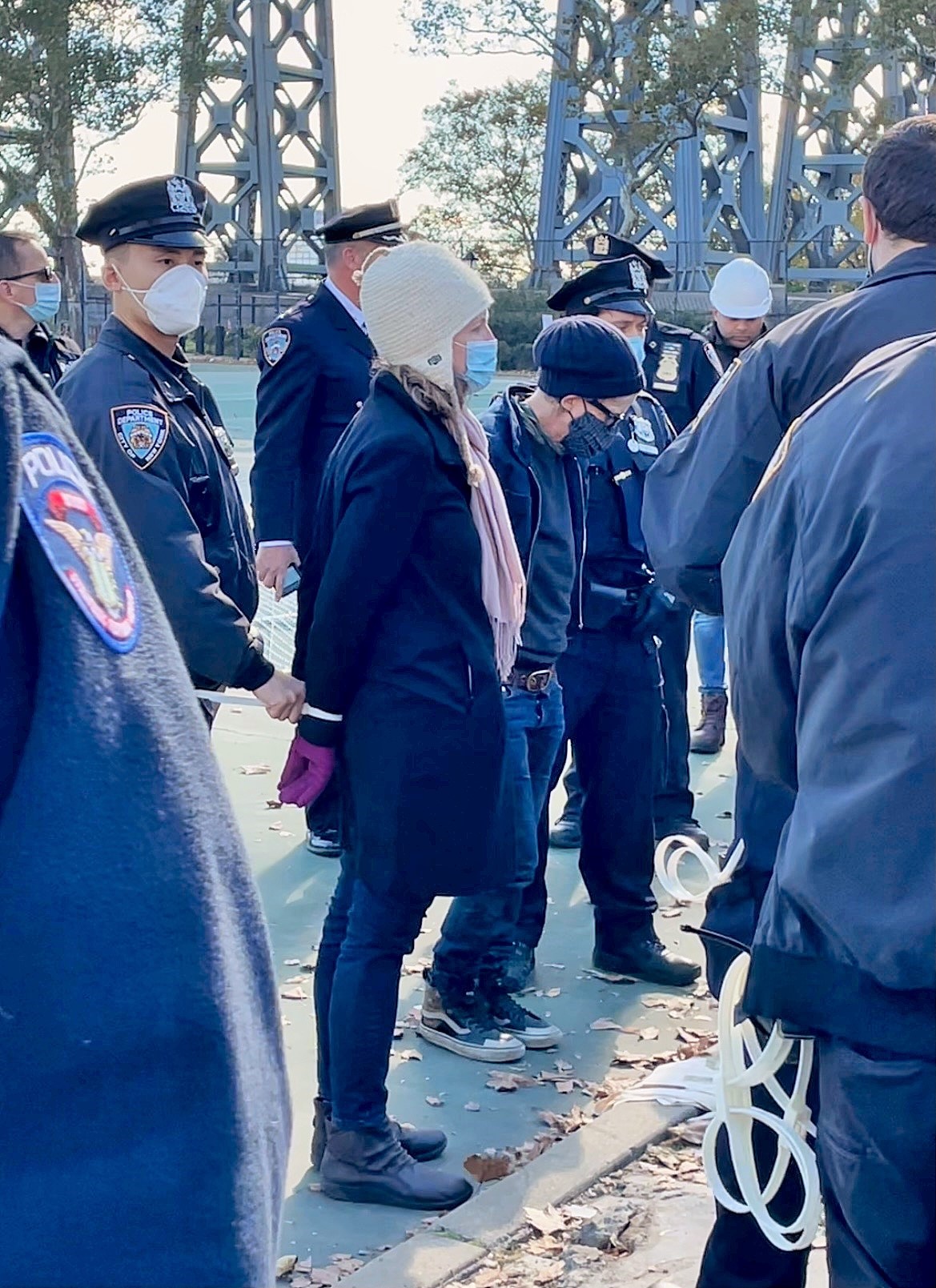 Police arrested City Council candidate Allie Ryan on Monday as she and fellow protesters tried to stop the demolition of the tennis courts in East River Park, part of the first phase of destruction of the 60-acre park under the East Side Coastal Resiliency project. (Photo by Emily Johnson)

BY LINCOLN ANDERSON | Updated Nov. 1, 11:20 p.m.: City Council candidate Allie Ryan and another woman were arrested by police Monday around 2 p.m. as they and a group of protesters were trying to block demolition of the East River Park tennis courts, part of the start of the East Side Coastal Resiliency project.

After a brief standoff with a smaller group of officers, a large force of 40 police eventually descended on the tennis courts.

“You are interfering with planned construction authorized by the Parks Department,” an officer blared through an electric bullhorn. “If you do not move you will be subject to arrest.”

As protesters chanted, “Save this park!” and “The people united will never be defeated!” the first-time candidate, who lives in the East Village, and another protester, Alice O’Malley, were slapped into plastic cuffs and led out of the park. Police said they were being taken to the Seventh Precinct.

“Thank you, Allie!” the activists cheered, with whoops and ululations.

“You should be arresting de Blasio!” one of them shouted at the cops.

A police spokesperson did not immediately have further details on the arrests and charges.

Overseeing the police response was Assistant Chief Stephen Hughes, commander of Patrol Borough Manhattan South, who was the main speaker at the big police-led meeting on Washington Square South this past June.

Before the cops cuffed the two women, Ryan stressed why it was important for her to take precious time away from campaigning on the election’s next-to-last day to join the protest.

“It’s frustrating,” she said. “I’m running because I want to answer the people who live in this district. If our councilmember had voted [against the resiliency plan] with the people, I wouldn’t be sitting here today. I probably wouldn’t be running today if she had sided with the community.”

Even before the arrests were made, as the protesters sat together in civil disobedience, workers were already starting to chainsaw down the metal posts holding up the chain-link fencing around the tennis courts, readying the area for the total obliteration to come.

East River Park activists are desperately putting their bodies on the line in hopes of stopping the destruction of their beloved park.

Monday morning, a day before Election Day and the first official day of “work operations” for the East Side Coastal Resiliency project, a group of park lovers, including Ryan, gathered at the park’s amphitheater at sunrise.

They soon converged at the tennis courts, just north of the Williamsburg Bridge. This is one of the first spots in the park that the de Blasio administration has said it will dig up for the multiyear $1.3 billion project.

Around 10:15 a.m., police started threatening to make arrests of the activists as the latter sat on the courts in civil disobedience holding protest signs.

As of 11:30 a.m., the protesters were still on the courts and no arrests had been made. Joining the police at the scene were workers from the Department of Design and Construction and the Parks Department.

Ryan, who is running for City Council in the general election on Tues., Nov. 2, is the candidate of the Neighborhood Party, a third-party line she created to run as an independent. Incumbent Carlina Rivera won the Democratic Party primary in June.

Ryan, who says she is not hung up on party labels and is an environmentalist above all, has made saving East River Park her top campaign issue.

Rivera and Mayor de Blasio, on the other hand, are staunch supporters of the so-called “elevatated park” plan, which would take at least five years to complete and put around half of the park off limits to the public at any given time. The activists warn that — knowing how slowly the city usually operates — the project would likely drag on much longer than merely five years.

Councilmember Rivera says E.S.C.R. is essential to protect the surrounding community from another Sandy-like flood.

But Ryan and the protesters say a far less-extreme, less-destructive plan, the so-called “berms plan” — that would not cut down the park’s nearly 1,000 mature trees — would work, and they are distraught that the city is supporting the current plan.

After Ryan’s arrest, the activists protested at Rivera’s district office, then went to the Seventh Precinct on Pitt Street, where they waited for Ryan and O’Malley’s release. The two activists were freed later that evening.

Arthur Schwartz, the attorney representing plaintiffs in a community lawsuit to block the coastal-resiliency project, said the city has been vague on the dates of when demolition work would actually start in the park. An E.S.C.R. community advisory issued Oct. 20 states that on Nov. 1, “closures within the park and pedestrian detours” will start, in preparation for demolition work. Schwartz said the city has indicated it wants to start digging up the tennis courts sometime later this month. Activists say it could be in three weeks from now.

But, clearly, things are moving very rapidly, as could be seen by the workers already chainsawing down the tennis courts’ fencing first thing early Monday morning.