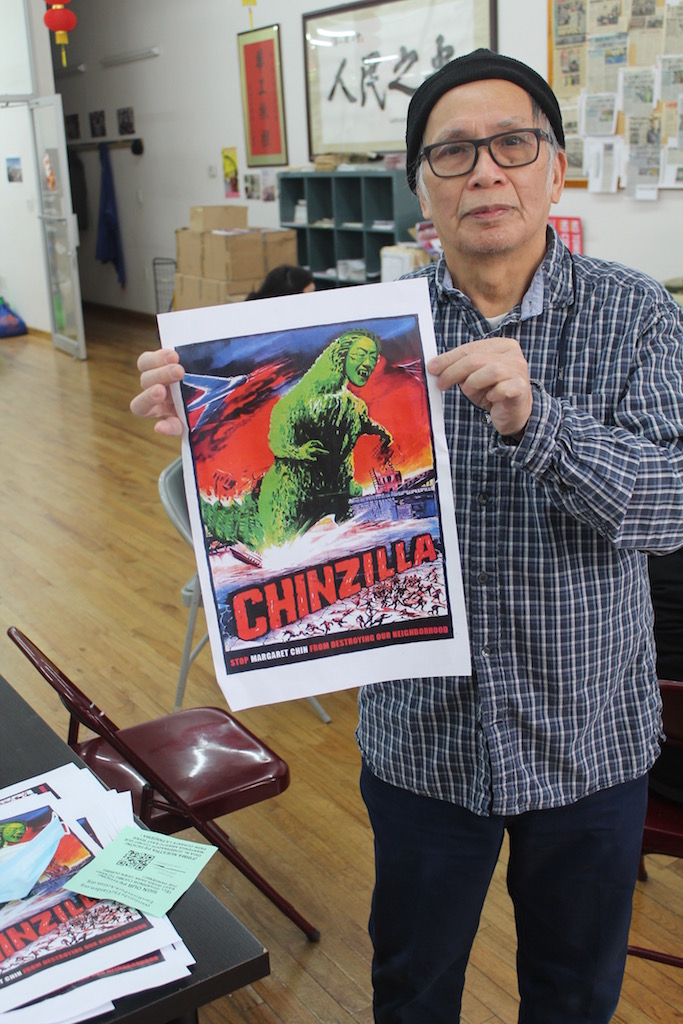 Activists fire back at ‘East Village politicians’ over poster flap

BY LINCOLN ANDERSON | Lower East Side and Chinatown activists blasted local politicians Tuesday for unfairly tarring the group East River Park ACTION as racist over a poster depicting Councilmember Margaret Chin as “Chinzilla” — and they demanded an apology.

In fact, they said, the illustration is spot-on in showing Chin as a destructive force in the area by favoring development, which is pushing out low-income residents and mom-and-pop stores.

Going even further, they said the attacks on East River Park ACTION are so divisive they would even make Divider in Chief Donald Trump proud.

The activists also blasted amNY, which first reported on the poster. They charged that the newspaper’s article “amplified” and “helps the smear attack from the East Village political leaders” and “gives Chin a platform to say how ‘hurtful’ she thinks the poster is.”

The contentious caricature shows an enormous green Godzilla monster with Chin’s face stomping out of the ocean, as below her feet, tiny people flee for their lives in fear. “Stop Margaret Chin From Destroying Our Neighborhood,” a tagline at the poster’s bottom says.

In fact, the Chinzilla poster was made, not by East River Park ACTION, but by National Mobilization Against SweatShops (NMASS). And the image is hardly new, having hung in plain view in the multicultural activist group’s storefront window, at 345 Grand St., for three full years already.

However, East River Park Action — which is fighting City Hall’s $1.45 billion plan to bury East River Park to raise it above the floodplain — put the poster on its Instagram page a few weeks ago. It was recently spotted there by East Village District Leader John Blasco, who promptly slammed it as “racist and xenophobic.”

All of the park, which runs between E. 13th and Jackson Sts., is in Rivera’s district. Chin, though, has been a strong supporter of the city’s East Side Coastal Resiliency project, to the opponents’ chagrin. While the project recently started in the E. 20s, work on the East River Park section is not slated to start until sometime in 2021.

No one was apologizing, though, at Tuesday’s press conference, held in the bitter cold outside NMASS’s office. In fact, the attacks on Chin by the speakers came fast and furious.

“The Chinzilla poster is an accurate depiction of what Margaret Chin is doing,” declared Zishun Ning, a member of Lower East Side Organized Neighbors (LESON).

JoAnn Lum, an NMASS organizer, said the poster’s critics should focus instead on fighting displacement.

“If the critics of this poster are so concerned about racism,” she said, “why aren’t they concerned about the evictions, the homelessness, the uprooting of so many people and small businesses in our community of color caused by Chin and de Blasio’s land-use and rezoning policies?”

Yanin Pena, a member of Youth Against Displacement, criticized the councilmember for not fighting against the “four megatowers” in the nearby Two Bridges area. One of the luxury skyscrapers, the 72-story One Manhattan Square, right by the Manhattan Bridge, has already been built.

By not fighting against such massive gentrification, Pena said, Chin has “displaced our mainly Puerto Rican, black, Dominican and Chinese communities, its small businesses and its workers. Now ask yourselves, who is the racist? Is it us, a multiracial community group fighting to stop the towers, or Margaret Chin?”

Although Chin has pushed the city to do a ULURP review for the tower projects, the activists said that’s insignificant.

The office of fellow activist group Chinese Staff and Workers’ Association is located right next door to NMASS.

The veteran activist slammed the politicians who called out the Chinzilla poster.

“They are the ones who pushed the East Village rezoning plan — excluding us,” Lam accused.

He was referring to the 2008 East Village/Lower East Side rezoning, which put height caps on new development in those areas. Chinatown activists, though, wanted the rezoning extended deeper into part of the Lower East Side that was not included, along with Two Bridges and part of Chinatown, but City Hall snubbed them. Subsequent efforts by the Chinatown Working Group to pass a grassroots community rezoning have also largely been stymied.

“They [are] just like Trump — Trump with a Chinese face! They are Trump in Puerto Rican face or Chinese face. They are like Trump — divide people,” he said of the Chinzilla-condemning pols. “This is how they are able to control us.

“All people, all Puerto Ricans, blacks, Dominicans, Chinese, come together,” Lam urged. “That’s the only way we can defeat them.”

He concluded his remarks by brandishing the Chinzilla poster and saying, “Margaret Chin is racist — and like this!”

Jasmin Sanchez, a lifelong Baruch Houses resident and an East River Park ACTION member, spoke at length. She said the riverfront park has always been a vital community resource — and never more so than now, during the pandemic.

She called accurate other posters pasted around the neighborhood that call Mayor de Blasio and Councilmember Rivera “Destroyers of East River Park.” The Village Sun previously reported on those posters, which, unlike the Chinzillas, did not receive any public blowback from elected officials.

“They are the destroyers of East River Park,” Sanchez declared of the mayor and Rivera.

“They’re trying to lump this [Chinzilla] poster in with the de Blasio and Carlina poster. It’s an attempt to discredit our group.”

“There was a post last week,” she said. “I’m saying, am I not Latinx, am I not Puerto Rican? They are trying to erase the efforts of the people of color that have been in this fight.

“We are all for flood protection,” she added. “We were without anything for six weeks [after Hurricane Sandy eight years ago]. We saw the water come in. We are already taking the proper steps that are needed to become a more resilient community.”

She noted that some flood protection has already been built around the Baruch Houses, in the form of seawalls funded by the Federal Emergency Management Agency.

“There was a plan that was worked on for four years that was not this,” she said of E.S.C.R.

She was referring to the previous community-supported plan that simply called for an earthen berm to be built along the east side of the F.D.R. Drive, without raising the height of the entire park.

Like other members of East River Park ACTION, Sanchez noted that the city’s plan does not contain any interim flood-protection measures.

And she said the $1.45 billion earmarked for E.S.C.R. could be better spent elsewhere.

“For me, those fields meant everything,” Sanchez said of East River Park’s ball fields. “I played softball there. I went there to get away from the harsh reality of the projects. After college, I started a softball league that utilizes that park.”

She said she is now afraid the E.S.C.R. project could close East River Park for up to 10 years, noting it took six years to renovate the park’s E. Sixth St. running track.

She added that public-housing tenants, due to preexisting conditions, have been hit harder by COVID than other city residents, so the park is really needed right now for social distancing.

“This is an equity issue for me,” she said. “People in public housing are dying [from COVID] at higher rates.”

Sanchez said she was also skeptical that various protections and neighborhood improvements that Rivera has promised in connection with E.S.C.R. would actually pan out. She charged that protections Rivera similarly pledged for the area around the Tech Hub project on E. 14th St. never happened.

“We are still waiting [for them],” she said.

The Baruch Houses activist noted that she and Blasco sparred on social media over his calling “this coalition” (East River Park ACTION) racist.

“He unfriended me after that,” she said.

Meanwhile, Pat Arnow, the director of East River Park ACTION, also attended the press conference. Afterward, she told The Village Sun that it was a “tough week” for her, but she remains unbowed in her fight to save the park.

“There’s one thing that’s come out of this — we are such natural allies,” she said of her group and NMASS and C.S.W.A. “This tough week has really brought us all together. If they thought they were going to suppress the issue — it amplified the issue.

“It’s tough to get beat up,” she said. “I’ve never been called that name before. But if it keeps them from destroying our park and neighborhood, I’ll take the heat.”