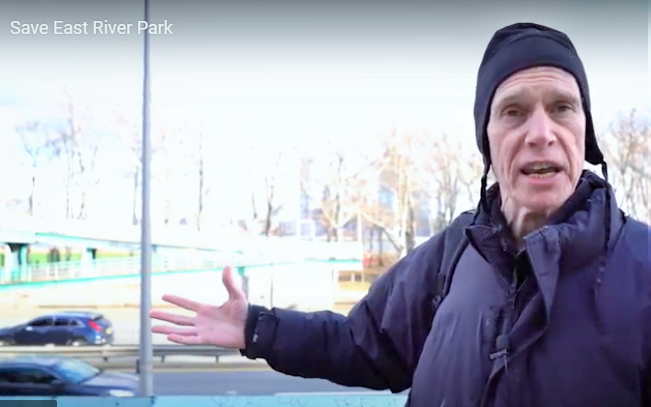 In the video, Howard Brandstein says the cause of climate change — car pollution, as embodied by the F.D.R. Drive — is not addressed in the city's East Side Coastal Resiliency plan.

Video: Coastal resiliency plan ignores the ‘elephant by the park,’ the F.D.R. Drive

In short, the video argues, the city’s $1.45-billion East Side Coastal Resiliency project, which would raise East River Park by around 10 feet, would not address a root cause of climate change: auto exhaust.

The F.D.R. Drive is used by 100,000 mostly single-occupancy cars every day, “a wasteful, extravagant method of moving people from ‘A’ to ‘B,'” Howard Brandstein, the Sixth Street Community Center’s executive director, says in the video.

E.S.C.R. opponents support an earlier design that would not have raised the park but instead would have decked over much of the F.D.R. to create a protective berm; meanwhile, under that plan, part of the current highway would be used for buses and light rail.

Instead, as Brandstein says, the E.S.C.R. plan would leave the F.D.R. as “a massive billion-dollar shrine to the fossil-fuel industry instead of a mass-transit corridor.”

In short, he stresses, what is needed is a Green New Deal for the Lower East — and E.S.C.R. is not it.

Also featured in the video, several lifelong Lower East Siders, including New York City Housing Authority residents, decry the city’s resiliency plan, which would fell all of the park’s existing 1,000 trees, which clean the air and provide shade.

“You are leaving us without any trees,” says Jasmin Sanchez, adding that many have already been chopped down on local NYCHA developments’ grounds.

Meanwhile, Sanchez notes that rates of asthma, cancer and COPD are high in the Housing Authority developments bordering the park.

Activist Tony Queylin says that having access to the park during the pandemic has been critically important for the community. To destroy all the park’s trees is nuts, he says.

“It’s a terrible idea,” he says of E.S.C.R. “It’s displacing people from their park… . We’re in the middle of a pandemic, we need the oxygen. Sandy did not hurt the trees,” he adds, noting that East River Park just “sucked up” the water from the hurricane more than eight years ago.

In the same vein, Yvette Mercedes, a NYCHA tenant, actor and community organizer, notes in the video that she did not have anywhere to flee during the pandemic, which is why she is so grateful for the park.