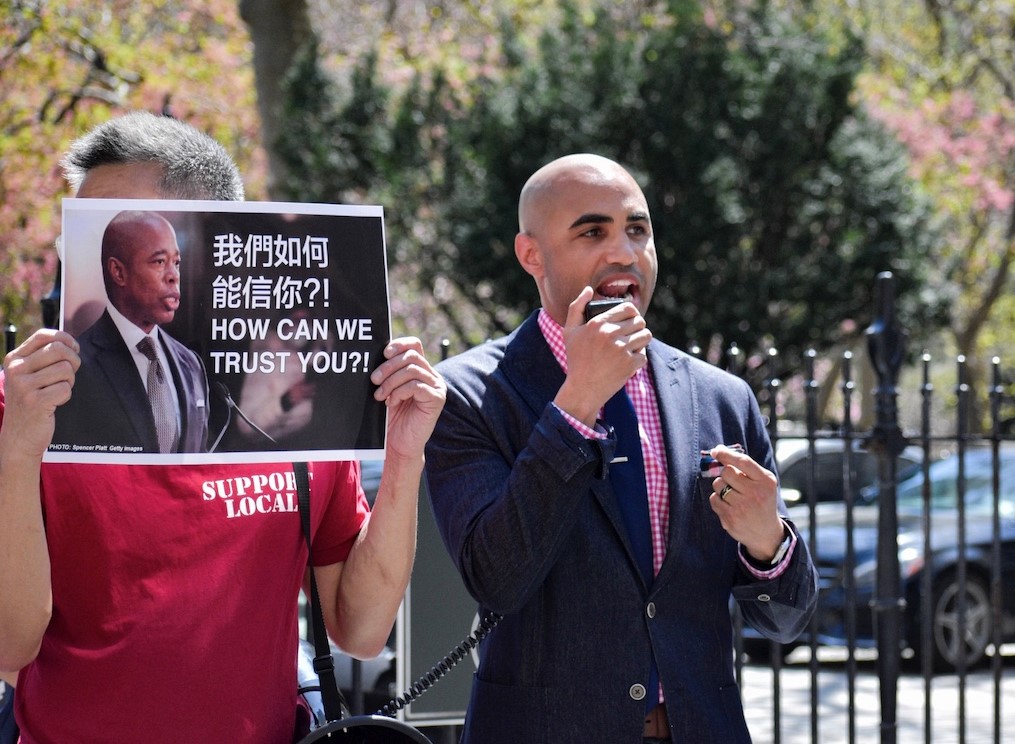 Denny Salas speaking at a rally in Lower Manhattan. (Photo by Dashiell Allen)

BY DASHIELL ALLEN | Updated May 3, 11 p.m.: A self-described “Obama Democrat,” Denny Salas is running for state Assembly in District 65 on a platform of uplifting immigrant communities, revitalizing the economy, improving education and building more housing.

The newly drawn boundaries for the 65th District stretch from E. Fourth Street on the north to parts of the Financial District on the south and Broadway on the west, encompassing the Lower East Side and Chinatown.

Salas is up against community advocate and former Assembly candidate Grace Lee, Democratic Socialists of America-endorsed social worker Illapa Sairitupac and socialist lawyer Alana Sivin, who is supported by the Coalition for a District Alternative (CODA).

Last spring Salas ran in the Democratic primary for City Council in District One, earning 292 votes. In that race, Salas ran an almost entirely virtual campaign, due to health concerns from the pandemic.

“I’ll be honest, I was scared,” he told The Village Sun. “I thought I would be clever enough to have a digital campaign, and that didn’t work.”

Now, he’s confident he has built a winning “rainbow coalition” representative of all corners of the district. He has the backing of Chinatown’s United Democratic Organization (U.D.O.), as well as the respective current and former presidents of the Chinese Consolidated Benevolent Assocation, Raymond Tsang and Justin Yu.

Additionally, Salas has earned the endorsement of former District One Councilmember Alan Gerson, who was unseated by Margaret Chin in 2009, as well as the residents association of Lands End II — the site of two of four supertall residential towers planned in the Two Bridges neighborhood.

A former stockbroker and lobbyist for small business boat manufacturing, which he described as a “very, very Republican industry,” Salas has worked most recently as a fundraiser for the Bronx Charter School for Better Learning. He has lived in Lower Manhattan for the past seven and a half years.

Salas describes himself as a product of “the American Dream,” having grown up poor in suburban Massachusetts, born to immigrant parents from the Dominican Republic who moved to the Bronx and Lower East Side as adults.

When he was growing up, his family survived a case of arson when someone attempted to set their house on fire. He recounts lying about his address in order to attend a well-funded school in a neighboring town.

That’s where his focus on education comes from.

“You can never achieve the American Dream if you don’t have access to good-quality education,” Salas said.

Over all, he’s pro-“good schools,” whether they be private, public or charter, and said he wants to “expand all options we have,” including the city’s specialized high schools.

To encourage public-private partnerships in the school system, he supports the idea of providing tax credits to companies that would develop vocational and workforce programs for underserved communities.

“There’s no doubt that we need to build more,” he stressed. “But, when we do build more and we’re building affordable housing, it needs to be in proportion to the actual public. So, whatever the calculation is, that’s what we need to start doing and really focusing on.” He added that his approach to development would include “a little bit of everything.”

Salas was a strong supporter of both former Mayor de Blasio’s contentious upzoning of Soho and Noho, as well as the development of 250 Water St. However, he said, “I don’t have this tunnel vision when it comes to offering real solutions to address these difficult problems. And people recognize that in me. So even if they disagree with me on something like that, they know that I’m ultimately working very hard in order to fix all these other issues, too.”

He points out, for example, that while he supported the Soho/Noho rezoning, he opposed the punitive arts fund and Joint Live Work Quarters for Artists (J.L.W.Q.A.) flip tax introduced by former Councilmember Chin but subsequently vetoed by Mayor Adams.

Salas has recently come out against the plan to build four supertall towers in the Two Bridges neighborhood — although during his previous campaign he told Gotham Gazette he would have supported them if they included more affordable housing and the developer had listened to community concerns.

A strong believer in home ownership opportunities for low- and middle-income New Yorkers, Salas would like to see the creation of a new Mitchell-Lama program.

He is strongly against the mayor’s plan to build a new so-called “mega-jail” in Chinatown.

“I never thought it was a good plan,” Salas told The Village Sun. “We can better redirect those resources to rehab Rikers.”

His stance has shifted, however, from when he previously told Gotham Gazette, “The goal is to close Rikers Island, that is 100 percent the goal, that is exactly what we should be doing. And we do need to build new jails in order to make that happen.”

Even at that time, he clarified to The Village Sun, he was still opposed to the jail because of its location in a low-income, minority community. At the time, he expressed to the Gazette his concerns “that every single time there needs to be a social responsibility to do the right thing, like close Rikers Island, that responsibility falls upon usually the lowest socioeconomic populations within the city.”

Salas also believes that majority non-white communities, including Chinatown and the Lower East Side, have been oversaturated by homeless shelters, calling the situation “structural racism.”

“Shelters don’t work,” he declared. “It’s temporary housing that doesn’t provide any of the services that are necessary. I’m a huge proponent of supportive housing.” He added that he supports a bill recently introduced by state Senator Brian Kavanagh that would provide housing vouchers for the homeless.

The Democratic primary for state Assembly will take place on June 28. Although Assemblymember Yuh-Line Niou currently represents the district, she instead chose to run for state Senate against Kavanagh, so will have to give up the seat come January.