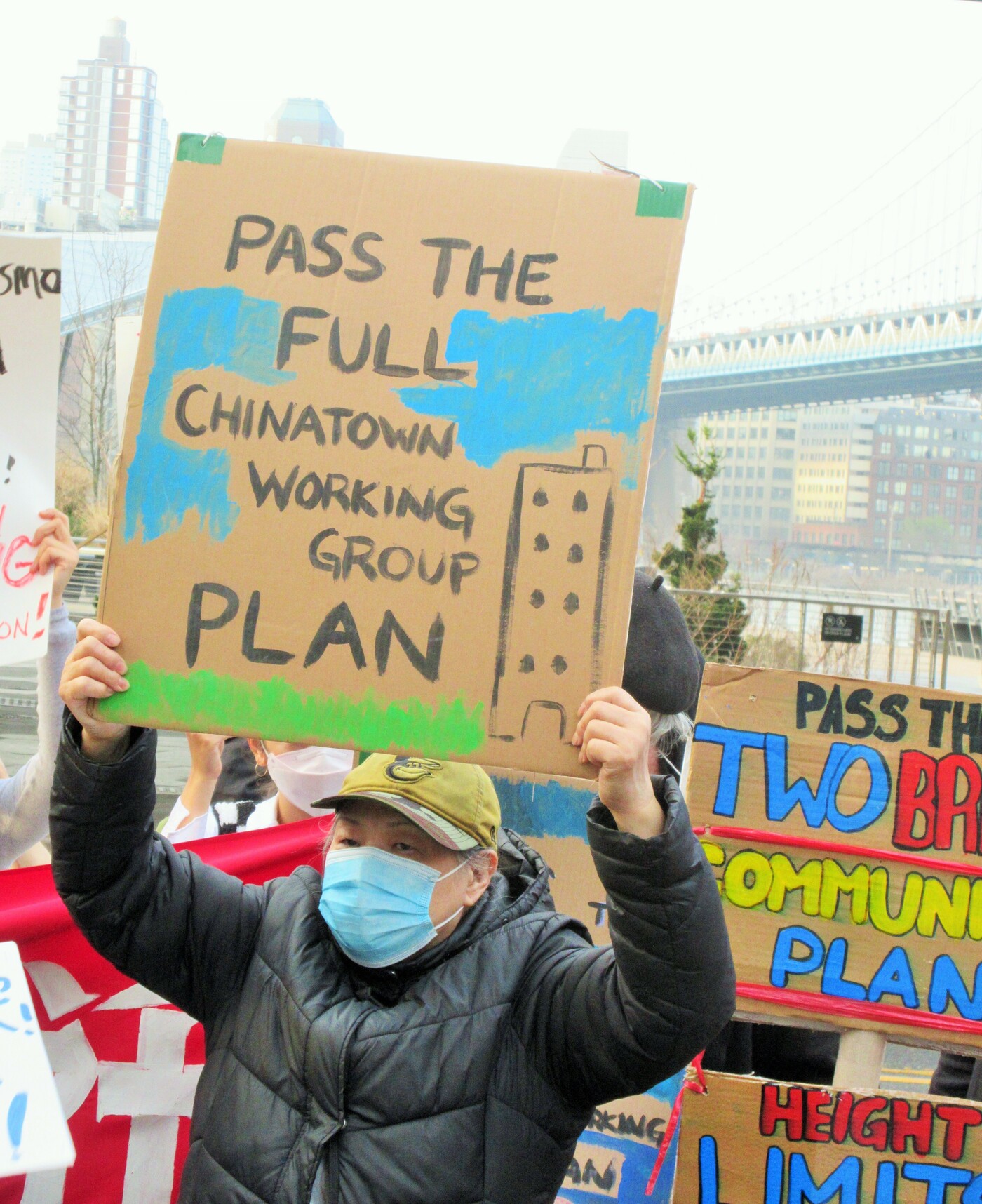 Neighbors rallied against the start of work on two new megatowers in Two Bridges on Thursday morning. (Photo by Dashiell Allen)

BY DASHIELL ALLEN | Just 24 hours after construction began on Chinatown’s future “megajail,” community groups and elected officials rallied together at 7 a.m. once again, as workers broke ground on two of four planned supertall towers in the Two Bridges neighborhood of the Lower East Side.

“Show us your permits!” they demanded.

Lands End II tenant leader Tanya Castro-Negron was shocked to learn arond 9:30 p.m. on Wed., April 13, that Chetrit Group, owned by developer Joe Chetrit, would begin drilling into the ground in front of her home at 265 South St. the next morning, after the developer’s foundation and excavation permits were approved just last week, as The Village Sun previously reported.

Castro-Negron’s low-income Section 8 building complex, housing 937 residents in 490 units, is in the first line of impact from the towers.

Chetrit’s plan, according to Castro-Negron and zoning diagrams, involves building two towers — at 64 and 70 stories tall — directly against her building’s eastern-facing wall, covering over dozens of windows.

One block away, workers began driving piles into the ground at the site of 259 Clinton St., a 730-foot tower to be developed by the Starrett Foundation.

Neighborhood residents have been fighting the plans to build four towers, practically on top of the already dense Two Bridges community, for more than five years. Their struggle is even the subject of a recent documentary. Previously, the opponents filed multiple lawsuits that, while initially successful, were ultimately overturned by the state’s Court of Appeals.

Many tenants of those and neighboring buildings that The Village Sun spoke to on Thursday were terrified at the prospect of the towers going up.

They’re worried about the pollutants that could be spread if the site of a former gas station isn’t properly remediated, which they fear it won’t be, and concerned the work could make their own buildings’ foundations even more unstable than they say they already are.

“They’re going to kill us!” Yuet Siu Lee, who’s lived in a neighboring building since 1980, said through a translator. Her biggest concern is air and water quality.

Recently, she recalled, when workers collected soil samples, the water in her faucet turned yellow. Two other residents confirmed with The Village Sun that was indeed the case

Another Lands End II resident, Wendy Perez, shared with The Village Sun photos showing visible cracks in both her ceiling and her walls, which she said demonstrate the building’s structural instability. Her floor is also steeply angled, making it appear as if the whole building were sinking into the ground.

“The structure of the building is already damaged because there are many cracks around the building,” said Clara Amat, a tenant from nearby 82 Rutgers Slip. “You’re going to build one building to destroy another one. Is that fair?”

Residents say they know what will happen, because they’ve seen it before. When the 847-foot-tall One Manhattan Square tower next door was under construction back in 2017 and 2018, they remember the ground began to shake.

“They would drill until like 3 a.m., so me and my mom would barely get any sleep,” Ariel Velez, a lifelong Two Bridges resident and community liaison for Councilmember Christopher Marte, told The Village Sun. “It was horrible and it was ongoing for three years.

“I’m tired of feeling like we’re being pushed out,” Velez said. “I was a victim of the Extell tower’s being built, and I remember it taking down Pathmark, which was the only affordable supermarket in our neighborhood… . Now you’re seeing them want to build these four towers over here and, more and more, our community is being pushed out and people can no longer afford to be here. People are struggling to even buy basic necessities, such as food. They’re living paycheck to paycheck… . And for them to have the audacity to build these towers, it’s not only classist, but it’s also racist.”

Kathryn Freed, a former councilmember for Lower Manhattan who lives on the Lower East Side, was also at Thursday morning’s protest.

“Here we are again — all up and down Lower Manhattan there’s construction,” Freed said. “Everywhere you turn where there’s an open field, somebody wants to build on it.

“They don’t care what they do to our homes,” she said. “They don’t care if they make them unlivable, as long as they get to do their high towers for luxury apartments. We all know they’re trying to get their shovels in the ground without the proper permits. This is illegal, it hasn’t been approved yet, they shouldn’t be going forward with it.”

All three expressed concern that the developers might be rushing their work illegally, in order to qualify for 421a, a program expiring in June that would exempt them from state property tax for up to 25 years if 25 percent to 30 percent of the units in their projects qualify as “affordable.”

“When we contacted the Department of Buildings and City Planning, we said they do not have an independent monitor,” Marte said. A monitor would ensure that the safety of residents is prioritized at the construction site, closely tracking the surrounding area’s air quality.

Marte charged that there has been no remediation work done at the site, and that the opponents had, in fact, told this to the city’s Office of Environmental Remediation the day before.

“Our city agencies are allowing profit to go over people,” the councilmember said. “They said, ‘We don’t care about the lead, the petroleum in the ground. What we care about is making sure these developers get the tax abatement that they’re desiring.’

“This is not only an environmental justice issue. This is … morally wrong,” Marte said. “When we talk about [a tale of] two cities, it’s right in front of us. The future is massive luxury development… . It will shift the foundation of these buildings, putting thousands of people and their lives in threat. And so we’re here with the community to try to stop this.”

“This morning, I stood with community stakeholders and residents to demand that work at the Two Bridges towers site be stopped and that all of our concerns are addressed,” Assemblymember Niou said in a statement after the protest. “This includes the inclusion of an independent community monitor for the voluntary cleanup project — as we secured in the 250 Water St. brownfield cleanup project nearby — and further due diligence to investigate the critical issues raised by residents, such as the formation of a task force, proper notification and communication with residents, zoning challenges, postage of work permits and community engagement.”

When asked by The Village Sun about the politicians’ concerns, Department of Buildings spokesperson Andrew Rudansky clarified that a “monitoring agreement” was reached as of Thursday afternoon. As to concerns over remediation he said, “D.O.B. has received the required letter from the Office of Environmental Remediation regarding remediation plans at the site.”

Calling the development dangerously rushed, Niou said she has filed zoning challenges to try to stop the work.

“Rather than a community-driven process, the Department of Buildings and the developer are rushing a harmful, deeply flawed process that silences our community voice and maximizes profit,” she said. “To that end, I have filed zoning challenges for the sites in question, and also urged the Department of Buildings to stop work on the site immediately due to numerous deficiencies in this process. Both D.O.B. and the developer must be held accountable and resolve all grievances and deficiencies prior to any work. Our community deserves no less.”

Niou’s zoning challenges are being filed in conjunction with the organizations CAAAV and TakeRoot Justice, arguing that the two proposed towers do not conform to the area’s zoning within the “Two Bridges Large Scale Residential Development” area. The opponents argue that the City Planning Commision did not adequately consider the project’s “impacts on air and light, open space and the character of the existing community as planned.”

Marte also announced he plans to expedite a lawsuit — already in the works with local residents — that he hopes will lead to a temporary restraining order (T.R.O.) being issued to halt the construction.

In a later conversation with The Village Sun, Alina Shen, a volunteer organizer with CAAAV, said she hopes the lawsuit will “work in tandem with the zoning challenges so that the towers are being hit from all tactics.”

If either the lawsuit or the zoning challenges were successful in delaying the work, it could lead the developers to miss the June 15 cutoff for eligibility for the 421a tax-abatement program.

While the crowd assembled was in agreement over their opposition to the four towers, there was a clear split between two groups as to their approach to countering overdevelopment Downtown.

Activists from the Coalition to Protect Chinatown and the Lower East Side are in support of passing the full Chinatown Working Group plan, which would cap building heights throughout the two neighborhoods, including in Two Bridges.

“No towers! No compromise!” they shouted, firm in their conviction that everyone in the area deserves protection from development pressures.

Conversely, CAAAV, Good Old Lower East Side (GOLES) and Tenants United Fighting for the Lower East Side (TUFF-LES) support the Two Bridges plan, itself a subsection of the full Chintaown Work Group plan.

“Our line has always been pass both plans,” Shen later told The Village Sun. “They’re on different timelines. The Two Bridges community plan is something that with a lot of organizing can pass this year and stop the towers.

“We do have a shared target and that is the developers, and so we shouldn’t look divided,” she said, adding, “Once the [towers’] foundations are laid, no plan can stop them from continuing to build.”

That message of unity resonated with Castro-Negron, the Lands End II tenant leader.

“This is what a unified community looks like,” she said in a moving speech at the protest. “You have different people here, different leaders with different platforms. You see the Two Bridges community plan, you see the Chinatown Work Group. What we will not accept are bulldozers coming into our backyard and doing whatever they want because they have the money to do so. This is our community and this is what it looks like.