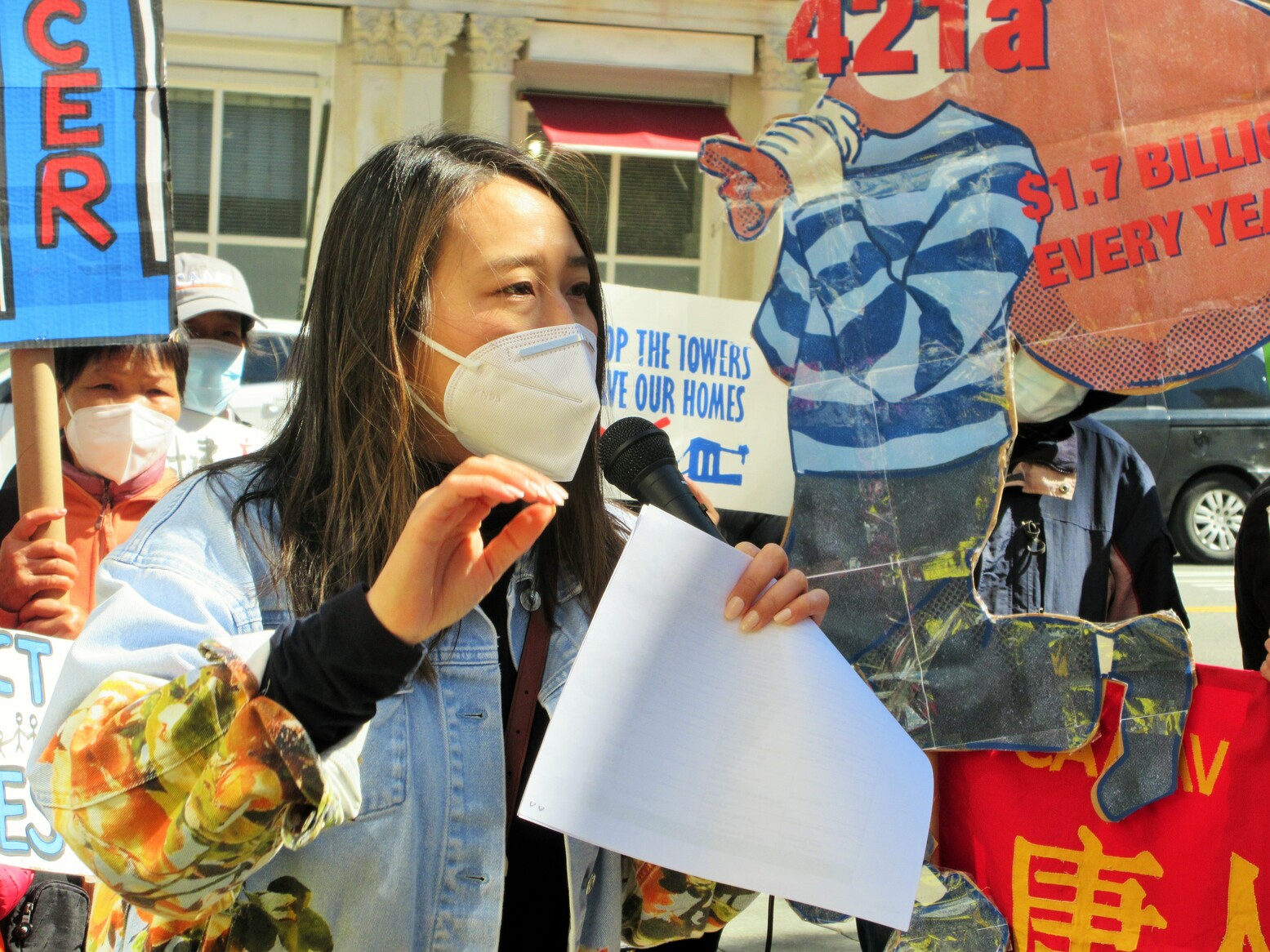 "We need to build according to need not greed," Assemblymember Yuh-Line Niou told the protest. (Photo by Dashiell Allen)

BY DASHIELL ALLEN | Chinatown and Lower East Side organizations rallied together outside the Department of Buildings’ offices near City Hall on Mon., April 11, calling on the agency to “check [Joseph] Chetrit,” the real estate developer who plans to build two “megatowers” along the East River.

Activists and Chinatown residents, organized by CAAAV Organizing Chinatown, Good Old Lower East Side (G.O.L.E.S.), and Tenants United Fighting for the Lower East Side (TUFF-LES), among other groups, are concerned that the development of the two towers — at 64 and 70 stories tall — will trigger the mass displacement of low-income immigrant residents, as well as endanger the health of surrounding communities.

They called on D.O.B. to revoke the Chetrit Group’s work permits, and to respond to a letter they sent the agency last week.

“Stop the towers!” they chanted. “Save our homes! We can’t wait! Chinatown is not for sale! Bullies not welcome!”

Opposition to the impending construction of four supertall towers along South Street in the Two Bridges neighborhood of the Lower East Side has been a rallying cry for many in Lower Manhattan since before 2018.

Now, according to Assemblymember Yuh-Line Niou, who spoke at the rally, developers across the city are rushing to break ground on projects in the next 10 weeks, before New York State’s 421a tax-abatement program, often criticized as a blatant developer giveaway, expires in June.

“There are folks that are going to try to push through for emergency permits, for rapid permits, for permits to try to speed up different kinds of developments right now, because the Legislature has let expire 421a,” Niou said. “We’re here today because we know the true cost of the out-of-scale megadevelopments that ignore the needs of the community, like the one that Chetrit is trying to push through in the last days of the 421a program.

Alina Shen, a lead organizer with CAAAV, said, “421a helps developers avoid taxes for 25 years. To avoid paying taxes, Chetrit will endanger workers, accelerate displacement and introduce toxic hazards into our neighborhoods. Historically Chetrit does not respect department safety, does not respect workers’ lives, and does not respect the Department of Buildings.”

At the beginning of April the property at 265 South St., the planned future home of two towers, was sold by L+M and CIM Group to Chetrit Group for $78 million. L+M is also in the process of purchasing the neighboring low-income apartment complex Knickerbocker Village.

A representative for the Chetrit Group was not available for comment, and L+M did not immediately respond to a request from The Village Sun.

“We must stand against gentrification,” said Xue Ming Liang, a 24-year resident of Chinatown and co-founder of the Chinatown Tenants Union. “I have seen the change as Chinatown is gradually being gentrified. … Chetrit Group is going to force the eviction of residents of Chinatown for the construction of these high-rise luxury towers. This is forced displacement of low-income residents. This is racism! … If these luxury towers are built it will cause rents to rise and prices to rise.”

Activists also took issue with developers in New York City that look the other way at dangerous workplace conditions, quite literally putting profit over people.

Diana Moreno, the interim executive director of New Immigrant Community Empowerment (NICE), said, “It is a lot of the time immigrant Latino workers who die at the hands of negligent developers,” citing the death last week of Holger Molino-Pinos, an Ecuadorian immigrant, who fell off a building in Queens.

Protesters also pointed out the environmental impact of the planned Two Bridges development, given that it would be built on the site of a former gas station.

“Chetrit’s towers are polluting our air and land,” said Daniel Alayo-Matos, an organizer with Good Old Lower East Side. “Several harmful contaminants have been found in the soil on site, but still the community has received no comprehensive report from developers about the findings and the steps they intend to take to mitigate the harm to the surrounding area.”

Previously, residents of Lands End II, a neighboring Section 8 apartment complex, told The Village Sun their apartments’ floors were tilting, due to their buildings’ instability. They expressed concern that any construction could put them in immediate danger.

On Wed., April 7, CAAAV and other organizations, along with more than 100 Chinatown and Two Bridges residents, sent a letter to the Department of Buildings requesting that it revoke its approval for excavation and foundation permits submitted to the department — given that separately submitted permits for construction haven’t been finalized.

“The disruption of excavation and foundation work on the thousands of low-income residents of this neighborhood, many of whom are seniors, will be grave,” their letter warned. “To consider that the Department could approve such a disruption with no outcome guaranteed is shocking.”

Shortly after Monday’s rally a few activists entered D.O.B.’s offices where they hand-delivered their letter to the acting commissioner’s chief of staff and the deputy commissioner.

In a response letter reviewed by The Village Sun, D.O.B. stood by its approval of the Chetrit Group’s excavation and foundation work permits, while acknowledging that, simultaneously, “associated permits have been requested, but have not yet been issued.”

D.O.B. spokesperson Andrew Rudansky told The Village Sun, “The applications for the Support of Excavation (SE) and the Foundation (FO) associated with this new tower project were approved last week, after D.O.B. plan examiners determined that all required items associated with the applications had been properly submitted, and that the plans complied with applicable Code and Zoning regulations.” He added, “Our Codes here in NYC allow applicants to proceed with earthwork and foundation approvals prior to full new building approvals, if they submit certain required items.”

Rudansky also clarified that “D.O.B. does not have discretionary approval in this process, meaning that if an application complies with our Codes and regulations, we cannot choose to deny it.”

The community groups have since then filed a zoning challenge through their counsel, Paula Segal, senior staff attorney with TakeRoot Justice, of D.O.B.’s acceptance for consideration of additional building permits. The challenge argues that the two proposed towers do not conform to the area’s zoning within the “Two Bridges Large Scale Residential Development” area, given that the opponents believe the City Planning Commision did not adequately consider the project’s “impacts on air and light, open space and the character of the existing community as planned.”

That argument was actually the basis for one of several lawsuits, including another alleging the “megatowers” should be subject to the city’ sUniform Land Use Review Procedure (ULURP) — all of which were rejected by the Court of Appeals last year.

Despite D.O.B.’s reluctance, the activists are still hoping that their actions — be it their letter or zoning challenge — will lead the agency to reverse course and revoke the permits.

At the same time, CAAAV, GOLES, TUFF-LES and other groups are also pursuing a rezoning plan that they say would stop all four proposed towers dead in their tracks.

The Two Bridges Community Plan, which they have been working on for the past five years, would cap building heights in the neighborhood, making it impossible for a developer to build taller without obtaining a special zoning variance.

“This is the year that all of these things are coming to a head,” CAAAV organizer Shen told The Village Sun. “We can only stall the towers so much. And so, at the end of the day, really the only thing that can stop the developers from building is our land-use policy plan.”

The Two Bridges Plan is actually a subsection of a larger Lower East Side and Chinatown rezoning plan known as the Chinatown Working Group.

“Developers a lot of the time submit rezonings, and then they get those passed in at most two years,” Shen said. “But communities, when they submit plans, it takes years and years of resources.”

She noted that the Two Bridges plan is in the final stages of its environmental review before entering ULURP. She believes the earliest the scheme could pass is by this coming September.

If Chetrit Group or any other developer were to complete the foundation before then, though, then any modification to the zoning codes would not prevent them from exceeding newly imposed height restrictions.

With the fate of the Two Bridges towers appearing to still be up in the air, activists remain hopeful that the buildings will be prevented from rising up next to One Manhattan Square, the only one of the megatowers to be built so far.

If they’re unsuccessful, though, Shen said, “The neighborhood will be irrevocably changed.”