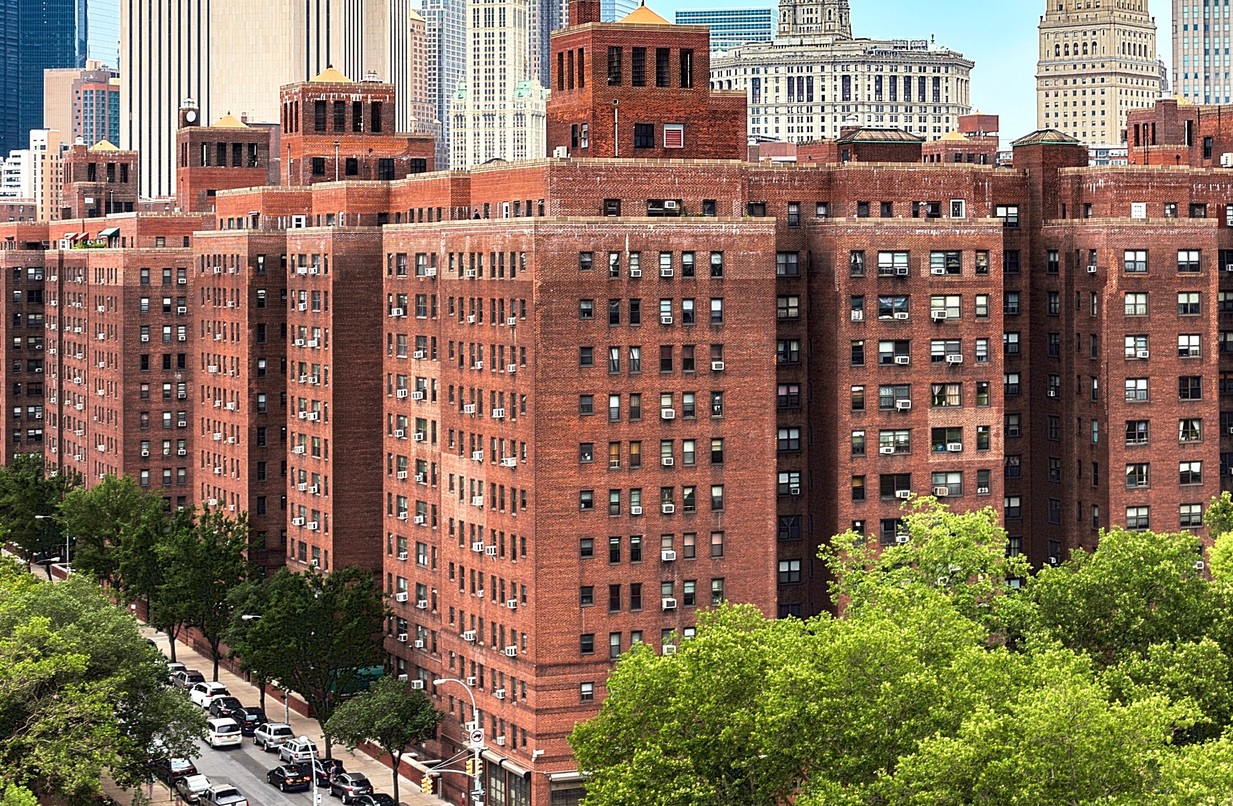 BY LINCOLN ANDERSON | Updated March 23, 5:15 p.m.: A group of residents of Knickerbocker Village in the Two Bridges area of the Lower East Side are trying to stop the sale of their homes to L+M Development Partners.

They are calling on RuthAnne Visnauskas, the commissioner of the state Division of Housing and Community Renewal, to stop the transfer of the sprawling property to L+M, fearing the developer’s takeover will lead to evictions.

Visnauskas must sign off on the sale of any property that falls under Article IV, as does Knickerbocker Village. Word is that a sale could be finalized as soon as March 31.

The opponents say that they have, in just a matter of weeks, gathered signatures of 813 residents to date who say they are against the sale. They also said the complex’s residents will be watching how elected officials weigh in on the issue — and that will be reflected in their votes when they go to the polls.

In 1933, Fred French broke ground on the low-income apartment complex, which was the nation’s first to receive federal funding through loans authorized by Congress under the Reconstruction Finance Corporation.

French sold the complex in the 1970s, after which it passed through a succession of owners. In 2002, current owner Cherry Green sought permission to exit the state’s Article IV program, which would have annulled affordability protections. D.H.C.R. granted the approval.

But a lawsuit ensued and the court ruled that D.H.C.R. has no legal authority to permit such an exit — and that Knickerbocker must stay in Article IV in perpetuity.

However, the complex’s tenants now fear L+M will try to “get around Article IV” and displace current low-income tenants in order to replace them with wealthier ones. In short, tenants fear the sale will undermine Knickerbocker’s long-term affordability as “one of the last strongholds of low-income housing in Chinatown and the Lower East Side.”

Last month, Councilmember Christopher Marte told The Village Sun that his understanding was that the complex’s tenants association had, in fact, “signed an agreement” O.K.’ing the sale.

“I think the tenants association has agreed to the sale,” he stated. “But I don’t think it’s been finalized yet. I don’t trust L&M as an owner,” he added.

On Feb. 14, a spokesperson for L&M told The Village Sun, “A memorandum of understanding (MOU) was negotiated and executed by the duly elected members of the Knickerbocker Village Tenants Association, L+M and New York State Homes and Community Renewal.”

As for concerns about the complex’s future affordability, he said, “L+M is bound by the terms of the MOU and will meet its obligations to preserve affordability at Knickerbocker Village and perform $50 million of needed repairs.”

Among the complex’s residents, the group Concerned Tenants of Knickerbocker Village has been leading the opposition to the sale. The group began organizing around the issue in January.

Speaking to The Village Sun last month, Isabel Reyna Torres, a leader of the Concerned Tenants, accused D.H.C.R. of pressuring tenants to accept the L&M sale, with the agency allegedly telling tenants that if they didn’t take the deal, they would be “looking at a double-digit increase” in their rents.

Torres, who was a co-chairpreson of the tenants association until earlier this year, said she was also told by Peter Curley, an L&M representative in acquistions and asset management, in January that rents would “go up 24 percent over two years” if the sale is not made.

Meanwhile, Torres said in February, that when she went door-knocking through the complex, about 80 percent of whose residents are Chinese, she found that many tenants “knew little to nothing about what’s going on. Some are afraid,” she said, “while others don’t think there’s anything they can do.”

Indeed, in a survey the tenants association conducted in December, most respondents were either against the sale or confused about it: 199 said there were opposed, 85 were for it and 73 said they don’t know.

As for L&M, Torres asserted, “Their overall plan is to deregulate Knickerbocker. The property itself is worth more than the buildings.”

Requests for comment by The Village Sun from members of Knickerbocker Village’s tenants association were not answered.

“Over the last several months, the residents and the KVTA have been expressing our concerns and fears to both HCR and L+M that the proposed terms of sale may violate Article IV — which ensures permanent affordability for our apartment complex — eventually take Knickerbocker Village out of affordability, and displace current residents,” the T.A. leaders wrote.

They expressed concerned that, under L+M’s proposal, project-based vouchers would be allowed for 397 apartments, or 25 percent of the units, plus area-median income (A.M.I.) rent tiers would be set for incoming tenants, and also that “rent caps” — meaning allowable annual increases — would be set for existing residents.

“These regulatory agreements,” the T.A. leaders warned, “enable L+M to get around Article IV restrictions without actually dissolving the Article. This is very concerning to us as Article IV is in place to protect the residents of Knickerbocker Village.”

“This is one of many examples of HCR and L+M’s reluctance to be transparent and forthcoming about the terms of the sale,” they wrote Hochul.

According to Torres, the plan under L&M is to raise rents to near $2,000, with project-based vouchers being issued to those tenants who can only afford to pay a portion of that.

However, the L&M spokesperson responded, “The rent caps are lower than historic rent increases, which have been 3.1 percent over the past 20 years, and far lower than what would be required if the sale did not go through.”

In addition, the spokesperson said rents being raised to $2,000 would only occur for apartments receiving project-based vouchers. Those tenants are currently only paying around $300 a month and the rest of the rent would be offset by the federal vouchers.

Local politicians have been on the issue, as well, with Councilmember Marte, state Senator Brian Kavanagh and Assemblymember Yuh-Line Niou writing a joint letter on Feb. 3 to L&M representatives. The pols, in their letter, charged that two informational hearings for tenants, held virtually in December, were not sufficiently transparent, partly by nature of the events being remote, such as by people not having “technological access,” partly due to language barriers. In addition, the politicians said, due to unclear deadlines involving issues like the required project-based vouchers, there is general “distrust among residents and stakeholders in this process.”

“While there are many unanswered questions regarding rent increases and actual costs of maintenance and repair for the buildings,” the elected officials wrote, “the tenants should have the opportunity to conduct an independent analysis of these costs and rent determinations. We believe that it is essential for the tenants association to retain an accountant, for any analysis to be conducted, and for all tenants to have access to any findings by the accountant relating to new rent determinations prior to the next [budget rent determination] hearing.”

Torres said she does not believe the T.A. currently has an accountant. However, the L&M spokesperson said they currently do.

Torres agreed that the virtual hearings were not conducive to transparency.

“All the information sessions were so shady,” she said. “They muted us. They stopped us from communicating and talking to each other.”

As for the contentious vouchers, the L&M spokesperson said, “The project-based vouchers (PBVs) are the primary element of our plan. The 25 percent of families at Knickerbocker Village who will get these PBVs are by definition housing burdened, meaning they pay more than 30 percent of their income toward rent, and in many cases in excess of 50 percent of their income. Residents who get a PBV will see the rent they pay monthly decrease. The difference between the lower amount they will pay and the new higher rent will be paid by a federal subsidy. This additional federal subsidy is what allows for spending $50 million [for needed repairs] while freezing rents for residents who did not get PBVs and capping any future rent increases they might get after three years.

“Without the Preservation Plan,” he continued, “there would be no PBVs lowering rents for 25 percent of the KV families, and everyone’s rents would have increased by 8 to 12 percent for each of the next two years. Because the $50 million in repairs would then not be made, rents would most likely need to increase every year for the foreseeable future at a faster rate than inflation.”

Following the publication of this article, the L&M spokesperson had further clarifications he requested be made. For example, he noted, the projected 24 percent rent hike that Torres cited Curley telling her about actually came from D.H.C.R. itself, and was based on what would happen if the complex’s current ownership remained.

As for Torres’s accusation that L&M wants to deregulate the property, the spokesperson responded, “L+M cannot deregulate the property. Knickerbocker Village will be permanently subject to Article IV regulation and will be subject to additional tenant protections under the regulatory agreement at least until 2069.  Those protections could be extended permanently if the tax exemption and the Department of Housing and Urban Development contracts are renewed, which all parties are bound to pursue. It would not be possible to build anything on the site, and there are no plans to do so anyway.”

Who really knows, though, what the future might hold for the Knickerbocker Village site? The Concerned Tenants don’t take any comfort in the fact that L&M has been moving to develop two new megatowers in Two Bridges right nearby. These residential skyscrapers would be on par in size with the massive, new One Manhattan Square tower just north of the Manhattan Bridge.

Meanwhile, awareness of the historic development’s pending sale — and resistance to it — among Knickerbocker Village tenants appears to be growing. The Concerned Tenants note how quickly they were recently able to collect petition signatures from more than 800 residents opposed to the sale.

“I hope,” Torres said, “our petitions give Knickerbocker Village tenants a glimmer of hope that we can stand up to big developers.”