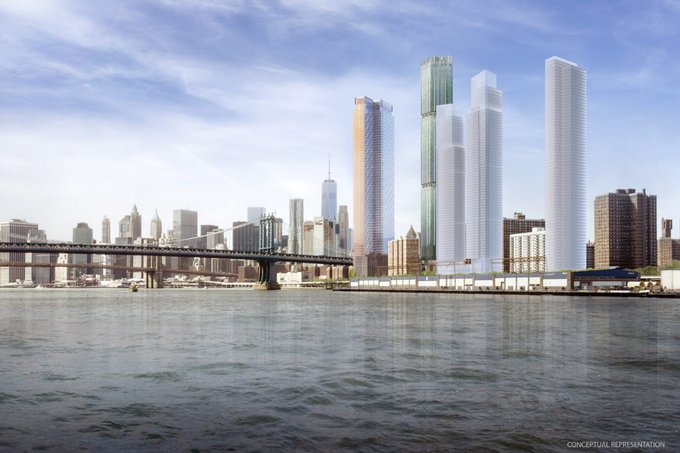 A rendering of the Two Bridges large-scale residential development plan. The building just north of the Manhattan Bridge has already been completed.

BY THE VILLAGE SUN | Updated Feb. 19, 1:10 p.m.: Opponents of the Two Bridges megatowers plan suffered a setback Tuesday when the Appellate Court unanimously overturned an earlier victory in a community lawsuit against the contentious project.

According to reports, the judicial panel ruled that the “reasonable interpretation” by the City Planning Department that the city’s Zoning Resolution allowed the towers’ approval should have satisfied the lower court.

Plaintiffs Lower East Side Organized Neighbors (LESON) and the Coalition to Protect Chinatown and the Lower East Side issued a statement on this week’s court reversal, saying they are contemplating their next possible steps for legal action:

“We are disappointed that the Appellate Court overturned the community’s victory by connecting it to the City Council’s case, which does not address the city’s violation of zoning law. But we are not discouraged in our fight against the four luxury towers in Two Bridges.

“We remember when, four years ago, Councilmember Margaret Chin told us these out-of-scale towers were a done deal and there was nothing to be done to stop them. We were able to find out that the city violated its zoning law to approve the towers that would significantly displace the community and damage the neighborhood environment.”

A year ago, community opponents won a major victory as State Supreme Court Justice Arthur Engoron “nullified” the project’s approvals. This past September, however, the Appellate Division ruled against a lawsuit by City Council Speaker Corey Johnson, Borough President Gale Brewer and Councilmember Margaret Chin, seeking to force the development scheme to go through ULURP, the city’s land-use review process.

The roots of the current situation extend back to 1972, when the city rezoned the Two Bridges area of the Lower East Side, intending for it, at some point in the future, to support large-scale development. Yet, the opponents charge that the current scheme should not be considered “as of right.”

In 2008, the city rezoned the East Village to prevent tall towers — but, despite protests, notably stopped short of including Chinatown and much of the Lower East Side, along with Two Bridges.

The current so-called large-scale development plan, or L.S.R.D., includes three projects with a total of four towers and nearly 2,800 rental rental units, with one-quarter of those being affordable units.

One megatower, known as One Manhattan Square, has already been completed hard by the Manhattan Bridge. The developers of the 72-story building have reportedly had difficulty finding buyers for its units.

The L.S.R.D.’s foes proudly note they have stood up to the political powers that be and delayed the project so far. The ultimate solution, though, they say, would be the adoption of the Chinatown Working Group Plan, which would extend zoning protections, like those in the East Village, southward to Two Bridges.

“We have stood up to our councilmember, our Council speaker and our borough president when they filed a phony lawsuit, which seeks to approve the towers through another process and actually undermined our chances at victory in the court,” the opponents said in their press release. “We have stood up to Mayor de Blasio and his displacement agenda funded by these developers. We have stood up to groups that try to divide the community with misinformation.

“Our strategy to stop the towers has never singularly relied on the court, because we do not expect the city to stand up to developers. Our victories in delaying the towers have been won by the thousands of people we have done outreach to and brought into our fight.

“The community gathered over 5,000 signatures not just in support of our lawsuit, but in support of the immediate passage of the entire Chinatown Working Group Plan. The Lower East Side and Chinatown deserve the protection granted to the East Village, and now this demand is even more urgent as we see the passage of the Chinatown Working Group Plan as the only way to stop these towers — and all future towers that might cause displacement — permanently.

“We are currently exploring our next steps for legal action, but every day we continue to organize and fight against displacement and for the full [Chinatown Working Group] plan.”

Tuesday’s ruling also affected a second community lawsuit against the Two Bridges projects, filed by Tenants United Fighting for Lower East Side (TUFF-LES). Like the LESON suit, it argued that the L.S.R.D. did not go through the proper environmental reviews and violates zoning.