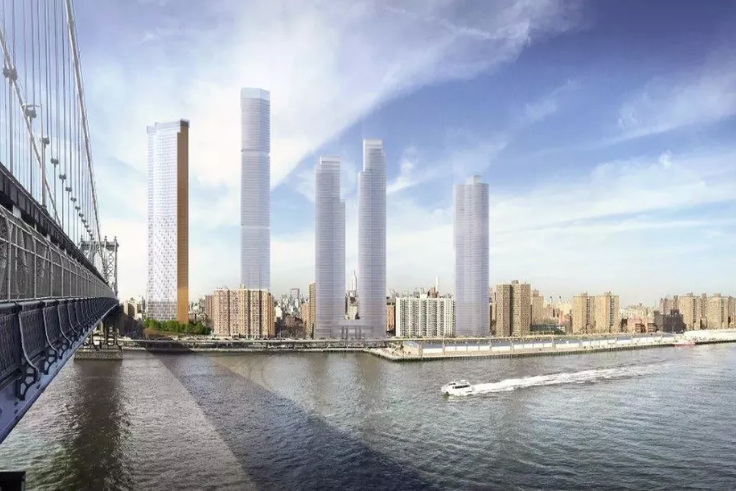 A State Supreme Court justice on Feb. 24 revoked the permits for a three-building project slated for the Two Bridges neighborhood. The three planned buildings (seen in the rendering above) include a total of four towers. The tower at far left has already been constructed. (Courtesy SHoP Architects)

BY THE VILLAGE SUN | Updated, Wed., Feb. 26, 4 p.m.: On Monday, a New York State Supreme Court justice ruled in favor of a community lawsuit to stop the construction of four luxury towers in the Two Bridges neighborhood. What’s more, the judge officially “nullified” the project’s approvals that had been granted by the City Planning Commission.

Judge Arthur Engoron ruled that the city did not make the required findings, under the Zoning Resolution, to allow a modification to the Two Bridges Large-Scale Residential Development site’s zoning.

“This is an amazing victory and it comes on the tails of victories across the city,” said Tony Quey Lin, a plaintiff in the Lower East Side Organized Neighbors lawsuit. “From the Harlem rezoning to the tower planned to shadow the Brooklyn Botanical Garden, the people are taking the city to court, and we are winning.

“We did the work and did hundreds of hours of research [and] outreach and just a month ago delivered 5,000 signatures to our elected officials to stop the towers and pass the full Chinatown Working Group Rezoning Plan,” Lin said. “Today we will celebrate, and tomorrow we will get back to work.”

“At the start of this fight, Councilmember Chin and Mayor de Blasio told us it was a done deal,” said Zishun Ning, a member of Lower East Side Organized Neighbors. “We could not be more excited to prove them wrong. We didn’t listen to the politicians whose pockets are lined with real estate money. We came together and demanded no towers, no compromise. And through our work, our organizing and our unity, we have stopped these towers and the massive displacement they would have brought to our community.”

Other plaintiffs on the suit, known as an Article 78 (which challenges a city decision), included Chinese Staff & Workers Association, Youth Against Displacement and National Mobilization Against Sweatshops. They were represented by AALDEF (Asian American Legal Defense and Education Fund).

The developers of the three projects include Two Bridges Associates LP, LE1 Sub LLC, and Cherry Street Owner LLC. The City Planning Commission considered the projects collectively since they are concentrated in the same area and could be built simultaneously.

Among their arguments, the plaintiffs charged that one of the three sites carries a deed restriction under which it must be used “in perpetuity” only as housing for “elderly and handicapped persons of low income.” However, the judge found this argument “not yet ripe for review,” since the Planning Commission never actually lifted this deed restriction in granting its approval.

The petitioners also claimed the projects would violate proposed new city regulations on “voids” within buildings, referring to empty spaces used to boost building heights. But Justice Engoran called this argument “unpersuasive” and hypothetical since the new rules have not been implemented yet.

In addition, the plaintiffs charged the projects would cause “indirect residential displacement,” but that the Planning Commission, in finding otherwise, “took a rose colored glasses look at the problem of gentrification” that would be accelerated by these four new towers.

In the final environmental impact statement, or F.E.I.S., for the projects, the Planning Commission noted that that 25 percent of the three buildings’ 2,775 new units would be designated as permanently affordable.

However, the Planning Commission also noted, “There is already a readily observable trend toward higher incomes and new market-rate residential development in the study area,” with monthly rents averaging $1,900 for studios and $3,300 for three-bedrooms.

At the same time, the F.E.I.S. states, the projects would create more affordable housing than were the plan not done and the area just left to piecemeal private development.

Unconvinced, Engoran, in his decision, wrote that the Court of Appeals — the state’s highest court — conducts a “very narrow” review of projects on environmental grounds.

But, again, he did say the Planning Commission did not make the findings — on things like impacts on light and air quality — required under the Zoning Resolution to allow the needed modification to the Two Bridges Large-Scale Residential Development zoning.

In addition, previously, on Aug. 2, Engoran ruled on another lawsuit on the Two Bridges mega-development, declaring that the project must go through the city’s lengthy Uniform Land Use Review Procedure, or ULURP. That suit was brought by Manhattan Borough President Gale Brewer, Councilmember Margaret Chin and the City Council.

Caitlin Kelmar, a spokesperson for Lower East Side Organized Neighbors, explained the difference between the two lawsuits.

“Both lawsuits were suing over procedure,” she said. “The court ruled in both instances that you need a special permit if you want to alter the underlying zoning. Margaret and Gale were saying [the plan] wasn’t a minor modification [to the zoning], it was a major modification, so it needed to go through ULURP.

“On our case, the judge ruled that, whether it was a minor or major modification, you have to meet the underlying conditions, such as [access to] light and air.

“In order for the towers to be approved and get a special permit, they would have to redesign a project that didn’t cast shadows all the way to the Bowery,” she added.

Access to air in this case could mean how the towers would affect the air flow — including the buildup of air pollution — in the area, which is adjacent to the F.D.R. Drive.

Kelmar said it’s expected that the developers will appeal the ruling. However, she noted the City Planning Commission itself has previously stated, in the project F.E.I.S., that the towers would, for example, impact light and create shadows.

Thus, Kelmar said, were the Planning Commission to continue supporting the project as is, “They would contradict their own statements.”

Another key difference between the politicians’ lawsuit and the community lawsuit, the spokesperson added, is that only in the case of the latter did the judge actually nullify the project’s approvals.