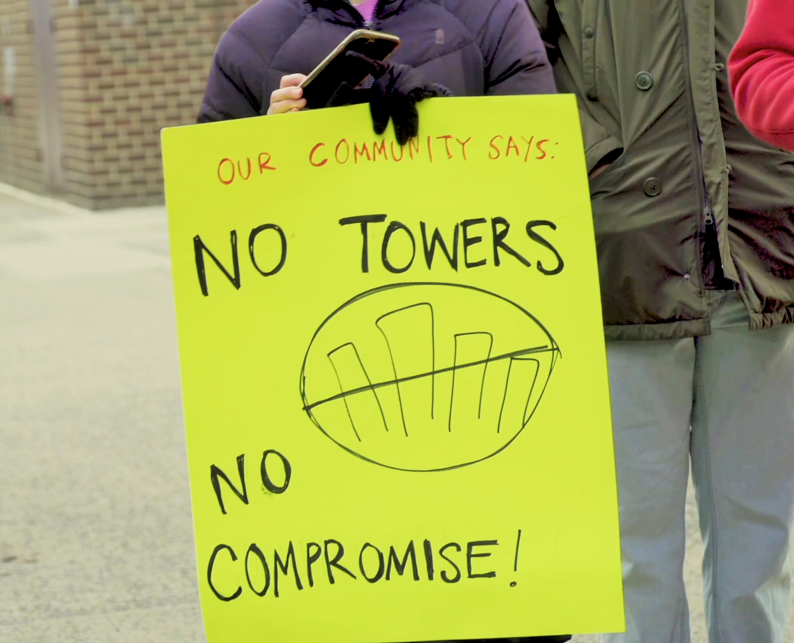 The battle against the Two Bridges megatowers continues.

BY DASHIELL ALLEN | Each New York City neighborhood tells its own story — from the long-established mom-and-pop stores, to the eclectic cast of characters that populate the streets.

Lower Manhattan, for one, is filled with neighborhood activists fighting against overdevelopment and displacement — from fighting to pass the Chinatown Working Group’s community rezoning  to the demand for 100% affordable housing at 5 World Trade Center.

These hyperlocal neighborhood issues, however, are often viewed — by both the media and activists themselves — in isolation from one another.

Readers may have heard of Elizabeth Street Garden but are they aware of a similar story unfolding in West Harlem? In Crown Heights, neighborhood activist Alicia Boyd successfully led the charge against a mostly market-rate tower near the Botanical Gardens. In Queens, the Flushing Anti-Displacement Alliance fought hard against a developer-driven rezoning, while in Long Island City, activists successfully blocked Amazon from building a second headquarters next to Queensbridge Houses, the city’s largest New York City Housing Authority development.

Filmmaker Ian Phillips, a born-and-raised New Yorker, elegantly weaves many of these struggles together in his latest documentary, “There Goes The Neighborhood.”

The doc, which has yet to be formally released to the public, is billed as a “love letter to New York City” and the activists that call it home.

The 75-minute film brings together distinct yet interrelated stories, closely following Lower East Side activist Arnette Scott’s fight against four massive 80-plus-story towers emblematic of displacement, greed and power, and Dannelly Rodriguez from Astoria, who led the charge against Amazon’s HQ2 plan throughout the winter of 2018.

The film also follows the elderly owner of a Prospect Heights hardware store surrounded by new development, and the owner of Brooklyn’s only Black L.G.B.T.Q.+ nightclub, which is displaced to make way for something newer, fancier — and most likely whiter.

A third-generation Lower East Sider, Arnette Scott loves her neighborhood’s diversity, and fears that the prospect of four encroaching towers will cause irreparable damage — to her health and to the surrounding community it would displace. The film follows her as she, along with the Coalition To Protect Chinatown and the Lower East Side, fights for a community rezoning plan to combat developer pressure.

The coalition’s lawsuit to stop the four towers is successful at first, and the coalition rejoices. But nothing in life is ever that simple. The struggle against the towers — their adverse environmental impact and potential for displacement — continues to this day after the state Court of Appeals reversed a judicial panel’s earlier decision. Currently, the residents of the Two Bridges neighborhood are rallying against the adverse environmental impact of the planned construction.

The film doesn’t scrutinize the fine numerical data behind the effects of upzonings, nor does it precisely identify the number of residential units deemed “affordable” in a given development under the city’s Mandatory Inclusionary Housing program. The doc doesn’t weigh the benefits of supply-and-demand solutions to the city’s “housing crisis.” Instead it takes a more human approach, by centering the stories of activists.

Phillips was born in Stuyvesant Town and grew up on the Upper West Side, and attended the School of Visual Arts. Almost all of his films are set in New York — but this was his first attempt at making the city itself his protagonist.

“What really interests me about New York is the overlapping of people and stories and everyday life,” he told The Village Sun. “And that to me is the greatest theatrical stage — it plays out every day when you ride the subway.”

The documentary evolved out of a growing feeling he had in 2018 while working near Hudson Yards while it was still being built. Looking around him, he said he noticed the city “was becoming this very monolithic, capitalist, utopian place, but it was becoming very ugly…and people and places and businesses and buildings were disappearing.”

He could see Hudson Yards through his window — and he hated it.

When Amazon announced it would be setting up shop in Queens, Phillips knew he had a story. It was a short-lived one, though, because after just four months, Amazon withdrew its plans once it was revealed that the multibillion-dollar tech company had made a closed-door deal with Governor Cuomo and Mayor de Blasio that amounted to hundreds of millions in tax breaks.

Both struggles — against Amazon and against the Two Bridges towers — were taking place next to low-income housing developments, Queensbridge Houses and, in the Two Bridges area, the Lands End towers.

Phillips wanted to interweave the displacement and gentrification struggles of different neighborhoods into a single film — to approach the topic from a citywide perspective.

That’s because, according to him, “There’s a lack of communication and community in New York, in general. New York is a very transient city, it’s a very capitalist city, and I think people don’t care that much about their neighbors.”

As Phillips sees it, gentrification is “much more subtle” than displacement — it’s the cause that leads to the latter’s dangerous effects.

“I think gentrification is a little more subtle,” he said. “It can be used to describe a coffee shop that goes out of business. It could be a few white college students moving into a building in Harlem. I feel like gentrification is more of a cultural thing. But displacement is much more harsh, much more egregious and much more racist.”

Perhaps, however, with the working-class-centered movement of people coming together to protect their homes, a sense of community isn’t just restored — it’s revitalized and created anew. That’s what Phillips hopes to convey.

But Scott’s and Rodriguez’s activism doesn’t end with Amazon and Two Bridges. It sees them marching in the streets for Black Lives Matter throughout the summer of 2020.

“They are emboldened and compelled by every injustice that they see,” Phillips said. “Particularly with Black Lives Matter, how could these two Black people be silent and complacent during that time?”

The film also draws a potential connection between gentrification, displacement and policing. As Rodriguez states in the film, “Police are the soldiers of gentrification,” arguing that the disproportionate incarceration and detainment of Black people is ultimately done in the service of allowing neighborhoods to become affluent.

In fact, Phillips said that when he was filming Black Lives Matter protests, “It was clear that the police were there to protect the property from being damaged, not to protect the people. They care more about the windows of Whole Foods remaining intact than they do about civilians getting hurt. That’s the connection right there.

Ian Phillips is currently running a crowdfunding campaign to pay for distributing and promoting “There Goes The Neighborhood.”

Look out for it at film festivals across the country this year, and hopefully sometime soon on a streaming platform — although probably not Amazon!

To stay up to date with the doc and learn about community screenings, follow it on instagram at @neighborhood_doc.