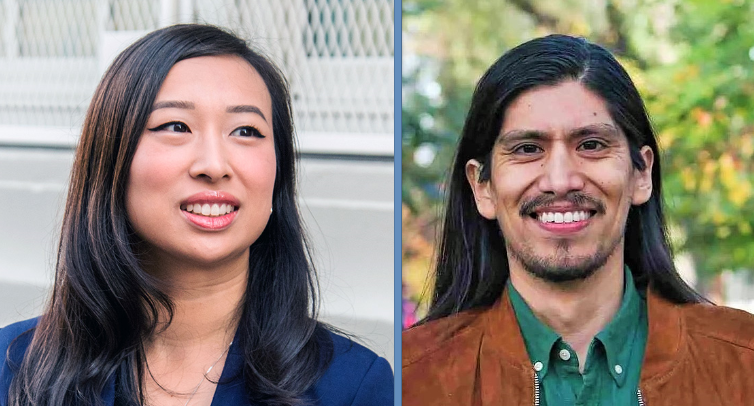 Assemblymember Yuh-Line Niou, left, has decided to take on incumbent state Senator Brian Kavanagh. As a result, Illapa Sairitupac, right, is now no longer running for state Senate but instead hoping to succeed Niou in the Assembly.

BY DASHIELL ALLEN | After Yuh-Line Niou’s hotly anticipated announcement that she’s challenging fellow Democrat Brian Kavanagh for his seat in the state Senate, the question remains who will try to fill her place in the Assembly.

Immediately following Niou’s announcement, two other state Senate candidates dropped out of the race to support her.

One of them, Illapa Sairitupac, who is endorsed by the Democratic Socialists of America, told The Village Sun that he’s shifting his sights to the Assembly seat, which covers much of the same area. He spoke exclusively with The Village Sun about his campaign.

The openly gay son of working-class Indigenous Peruvian immigrants, Sairitupac is a social worker who has called the Lower East Side home for the past nine years.

A first-time candidate, he’s proud not to be a “political insider,” having never previously worked for a politician or run a campaign. Instead he’s running as an activist and organizer, who’s well-known within the New York D.S.A.’s eco-socialist working group.

If he wins the Assembly seat, Sairitupac would be the first D.S.A. politician representing Manhattan, in a district that spans the socioeconomic spectrum, ranging from the working-class neighborhoods of the Lower East Side and Chinatown to the elite Financial District.

“I think it would be pretty poetic and pretty great if a socialist represented Wall Street,” he said.

Sairitupac’s biggest priority if elected to office would be tackling climate change.

“The climate crisis is already at our doors, the floods are here,” he said, “and we need city, state and federal governments working together to protect working-class communities from the devastating impacts of climate change with holistic solutions as part of the Green New Deal and not just cutting corners.”

Sairitupac will fight to pass the New York Build Public Renewables Act, which would be a major step toward transitioning completely away from fossil fuels. Last June he and a group of D.S.A. activists were arrested after they chained themselves on Broadway outside City Hall demanding the bill’s passage.

More locally, Sairitupac is a fervent supporter of the Chinatown Working Group’s neighborhood rezoning plan, which would limit development and prevent displacement in the area. He’s also against the city’s plan to build a “megajail” in the heart of Chinatown.

He feels directly affected by those issues.

“Every day I’m nervous about being displaced,” he said, referring to the ever-rising cost of living in the area.

“I think it’s important to be a legislator but also an organizer,” Sairitupac said. “So I want to be that combination of someone that doesn’t just sit in his office but who also is always engaged in the community in these fights on the ground.

Among other prospective candidates for Niou’s Assembly seat are Grace Lee, a neighborhood business owner and activist, and Alana Sivin, a socialist public defender.

Lee, who fell short in a bid against Niou in 2020, told The Village Sun that she’s “weighing all options.”

Sivin dropped out of the state Senate race shortly after Niou’s announcement. She told The Village Sun that she plans to “talk with my neighbors and community members to see how I can best serve the community going forward.” She added she recently tested positive for COVID-19 and is right now “focused on getting fully healthy and recuperating.”

In a statement of support for Niou, Sivin said Niou “has been there for her community as an unapologetically outspoken member of the Assembly, and I trust her to take our fight to the state Senate.”

“Clearly, there is a deep dissatisfaction with our representation in the Senate, which is why I’m running,” she said in a statement.

“I will build on my nearly 30 years of public service by continuing to fight for housing, healthcare and against the political machine… . I wish Yuh-Line and Brian the best of luck, and look forward to a spirited primary race.”

This race will be Kavanagh’s first major challenge since he was selected in 2017 in what critics called a backroom deal between Democratic Party bosses to fill the seat formerly held by Daniel Squadron.