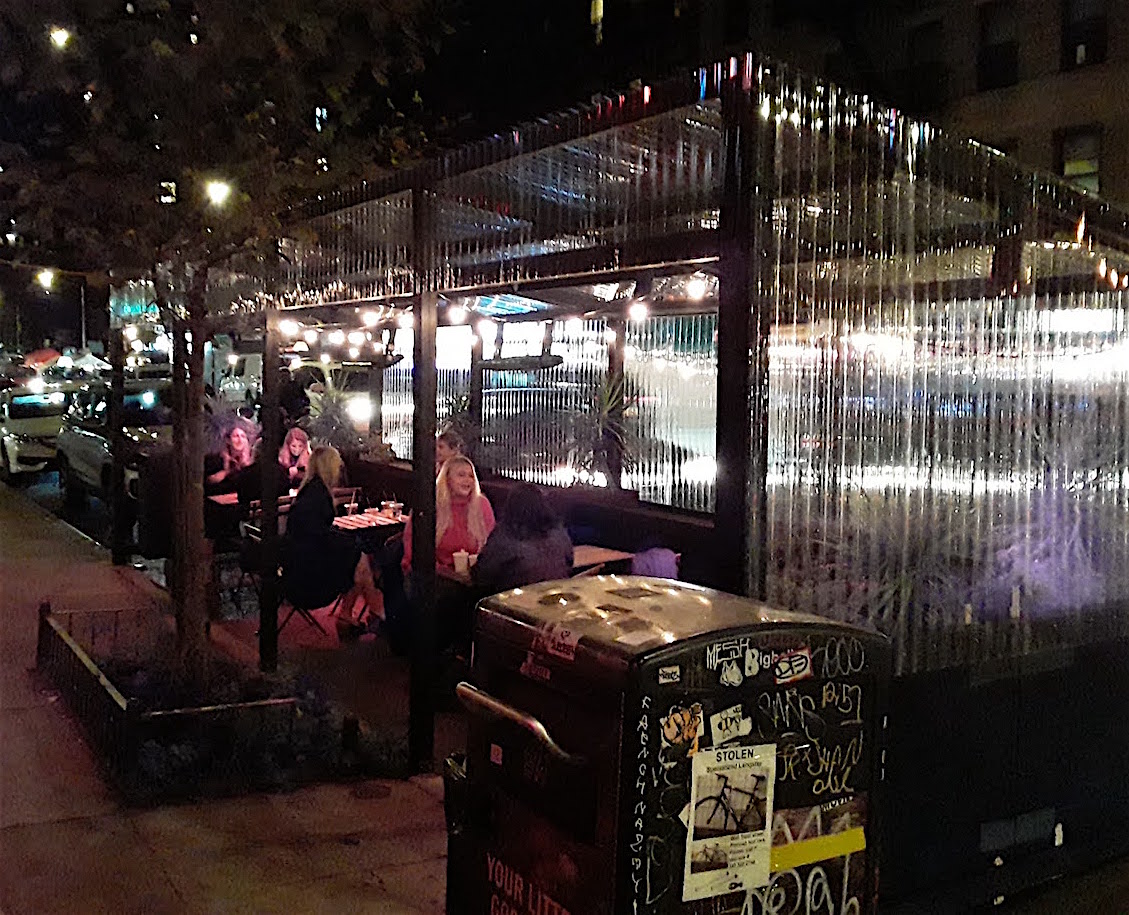 An outdoor dining structure on Avenue A outside Niagara bar. (Photo by The Village Sun)

BY THE VILLAGE SUN | Stop! As in, stop the process of making the Open Restaurants program permanent. Stop it right now!

That was the message that Community Board 2 sent to City Hall in a hard-hitting resolution it recently passed by an overwhelming majority.

Basically, the Greenwich Village/Soho/Little Italy board is demanding both “a plan for a formalized community review process of outdoor dining and an enforcement plan.”

Meanwhile, C.B. 2 blasted the program as being a massive “giveaway” of pubic space — on sidewalks and in the curbside street lane — specifically to the hospitality industry.

As stated in the resolution, the board said it opposes “the outright privatization of public space which gives away [a] public right-of-way to one industry without any public input. … [I]t is ultimately the property owners that will benefit from the free public land.”

C.B. 2 members had a vigorous debate before they voted on the issue at their Nov. 19 meeting. The resolution originally, in vague language, said the board wanted to “slow down the process” of making the Open Restaurants program permanent. But, during the meeting, that language was changed to the more firm and unequivocal “stop the process.”

Rocio Sanz, the co-owner of Tio Pepe, a Spanish restaurant on W. Fourth St., and a longtime small business advocate on the board, spoke forcefully against the resolution before the vote.

“What is permanent today will be temporary or not exist tomorrow,” she assured, downplaying the idea of permanence. “Whoever is in power, whoever is governor or in City Council will decide. … Is this the same board that I hear talking about saving small businesses? This is a pandemic…and you are considering ‘slowing,’ ‘stopping’? Are you out of your mind?” she asked, incredulously. “Just be careful what you wish for. You’re going to have a lot of empty storefronts. You’re going to have high crime. … Don’t do this. It’s ridiculous.”

Sanz claimed there is, in fact, enforcement, citing the White Horse Tavern, whose liquor license the State Liquor Authority summarily suspended in July for the place’s allowing booze-fueled sidewalk parties, among other violations.

But Bob Ely, a chairperson of one of the board’s Liquor Licensing committees, responded to her, “I think the resolution is about getting a message to our elected officials that you can’t just do things without discussing it with the people that are affected by it. This is about the message.”

Fellow board member David Gruber added, “No one is saying we don’t want to help the restaurants — but this pandemic will be over. We don’t want a dictum to make it permanent. Give it till next September, but then evaluate. There’s no need to have these curbside as-of-right land grabs.”

In October, following Mayor de Blasio’s lead, the City Council voted to extend the pandemic-inspired outdoor dining program for another year, through Sept. 20, 2021, with the pledge “that program would then be replaced by a permanent program to allow for the use of roadway seating as outdoor dining areas.”

As the C.B. 2 resolution notes, the board “fervently advocated for and supported measures for temporary outdoor dining to alleviate the economic hardship faced by eating and drinking establishments,” including the Open Restaurants program, which the mayor O.K.’d in June by executive order.

However, the Downtown community board — like many local residents — subsequently was outraged by the lack of public input into City Hall’s decision to suddenly make the emergency temporary program permanent.

Meanwhile, C.B. 2 disapprovingly notes, some bar and restaurant operators are “inappropriately” using sidewalk space, such as by putting out a double row of tables, both along the curb and along the building line (tables are only allowed along the curb), or extending enclosures or awnings from the sidewalk onto the street.

“In all cases, these enclosures that are extensions of the building to the sidewalk curb, inadvertently, privatize the public sidewalk space,” the resolution states, “by forcing residents to walk through an ‘outdoor room’ to use a public sidewalk right-of-way that has been severely reduced below the required 8-foot clearance, potentially compromising the public safety and public health of the community at a time when COVID-19 cases and hospitalizations in the city are on the rise.”

In short, accusing local politicians of outright wrongdoing, the board’s resolution states, “Our elected officials’ rush to judgment, without any formal community review process to permanently privatize public space for only one industry during an unprecedented global pandemic, is malfeasance.”

Aesthetics were another issue for the board, which warned that the hodgepodge of ramshackle outdoor dining structures could mar — the board actually used the word “disfigure” — the historic Downtown area if allowed to become permanent.

The board cited a slew of complaints it fielded from local residents about the program, including a “complete lack of enforcement” by the Department of Transportation, which is the agency spearheading the initiative; the “climate impact” of the outdoor heaters that operators are being allowed to use; 20-pound propane heaters being stored right next to residential buildings “in unlocked cages”; the fact that 311 calls complaints are made but usually result in “little or no curing of the violation”; blocked residential entryways; sidewalks that have been illegally narrowed too much by outdoor seating; noise; and amplified music.

In addition, the board noted that the number of 311 complaints for street noise and commercial noise both shot up from June to November compared to the same period last year — by 46 percent and 32 percent, respectively.

Over all, the board said, the city completely “disenfranchised” residents by making the outdoor program permanent without any provision — including in the future — for community involvement:

“The transition of the temporary outdoor dining program (Open Restaurants and Open Streets: Restaurants) to a permanent outdoor dining program without building a clear enforcement plan and process for community input is a complete disenfranchisement of the residents in C.B. 2 during a global pandemic, especially those who live in residential zones, where commercial [zoning] overlays place eating and drinking establishments on heavy residential streets.”

The resolution further adds, “A completely flagrant lack of enforcement by D.O.T. over the last five months gives C.B. 2 residents absolutely no confidence in a permanent version of this program. … D.O.T. has issued no fines during the duration of the outdoor dining program and Commissioner Trottenberg is seeking a lax approach to enforcement by the State Liquor Authority. … There is no enforcement coordination between D.O.T. and S.L.A.”

Furthermore, the board added that before the decision to make it permanent, the program should be reviewed during all seasons year-round to assess its impacts.

C.B. 2 also strongly urged that applicants for the outdoor dining program undergo the same S.L.A./community board review process that applicants for liquor licenses currently do. In this way, operators would have to accept stipulations wanted by the community. Community boards are a “quick and efficient forum” for residents and operators to reach solutions on quality-of-life issues, the board assured. Again, community boards currently have zero input on the Open Restaurants plan, although they do have input on applications for Open Streets (streets that are blocked off to cars).

Before the board members voted on the “reso,” Cormac Flynn added a warning. Businesses with liquor licenses that can pay higher rents have been pushing out other retail for some years now Downtown — a trend that Open Restaurants would only worsen, in his view.

“This law being permanent,” he said, “is a death sentence to all neighborhood retail that is not bars and restaurants.”