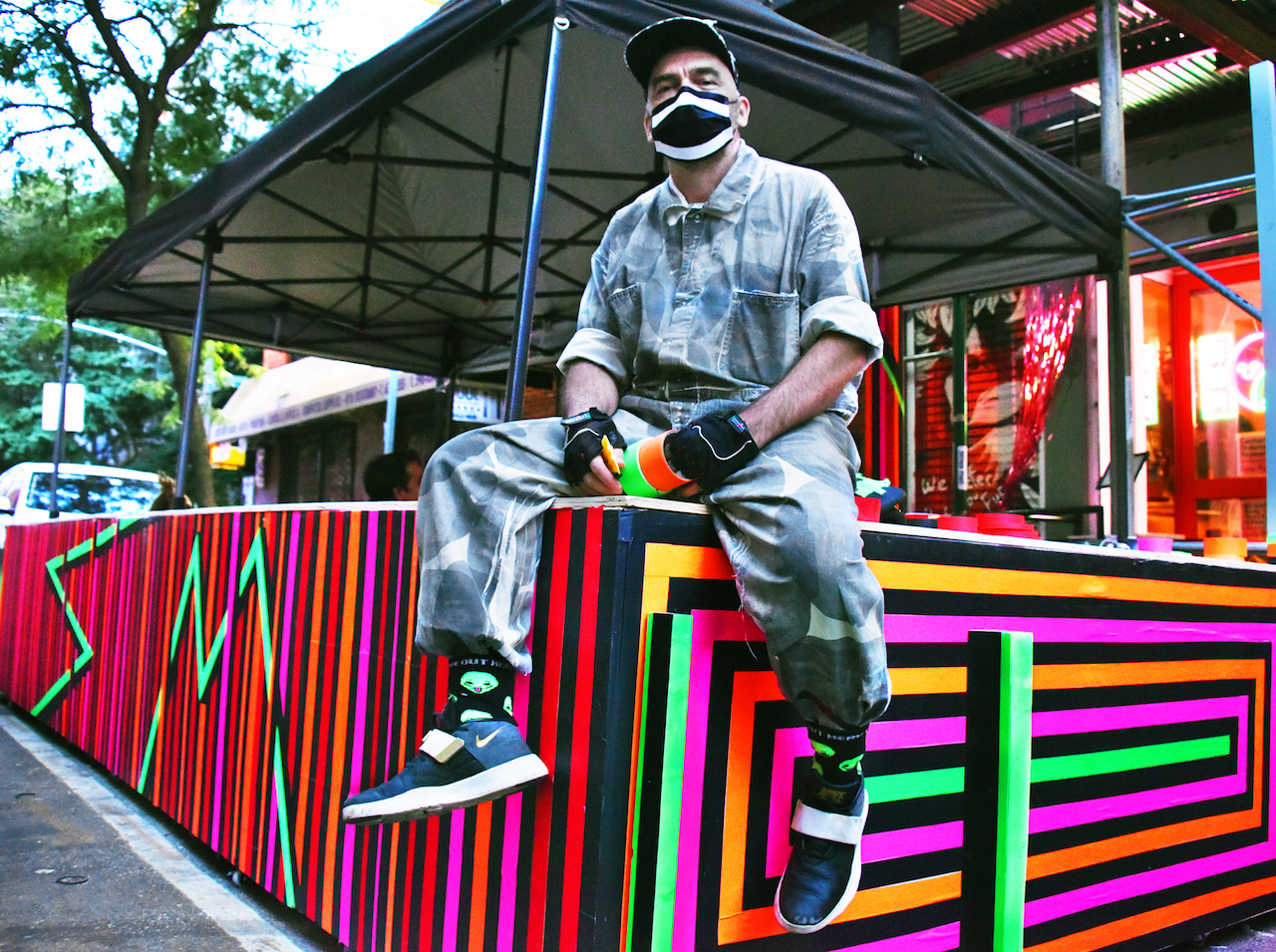 BY LINCOLN ANDERSON | By a near-unanimous vote, the City Council on Thursday approved the extension of the city’s new Open Restaurants program for one year.

After that period is up, the Council intends to revisit outdoor dining in order to make the program permanent.

There is no question the Council’s ultimate goal is to make the pandemic-spawned emergency scheme a full-time fixture of city life into the future. A press release issued by the Council stated, “The New York City Council will today vote on legislation to make outdoor dining permanent.”

Per the press release, after Sept. 30, 2021, “that [current Open Restaurants] program would then be replaced by a permanent program to allow for the use of roadway seating as outdoor dining areas.”

Mayor de Blasio launched the Open Restaurants program as a lifeline back in June, when indoor dining in New York City was still prohibited due to the pandemic. At the end of September, Governor Cuomo allowed indoor dining at 25 percent capacity.

With colder weather having arrived, the Council on Thursday also voted to legalize the use of portable propane heaters in outdoor dining areas, subject to Fire Department guidelines. Currently, only piped natural gas heaters — not propane — are allowed for use.

Intro 2127-A was sponsored by Councilmember Antonio Reynoso, who represents Bushwick, Williamsburg and Ridgewood, in Brooklyn.

“New York City’s outdoor dining program has been a remarkable success,” Reynoso said. “Now, by making outdoor dining permanent and allowing for the use of outdoor heating lamps, my bill will allow for the continuation of the program into the colder months. This is a huge win for the restaurant industry and its workers, diners and the morale of residents. I look forward to continuing to craft outside-the-box solutions for how we can safely revitalize our city and its economy.”

“It has enlivened our streets,” he said. “It has been a bright spot in a very dark time in our city. It has offered us a much-needed chance to socialize.

But he added that “protocols and procedures” for the program are also needed, concerning, for example, how it works on narrow streets or how snow plows will function with it. However, the City Council was not going to delve into all those issues on Thursday, he noted.

“But this is a work in progress,” he explained.

Although the Council will be looking at “fine-tuning” the program over the winter and the rest of the year, outdoor dining is here to stay, the speaker assured.

And as for local residents and community boards daring to stand in the way of the Open Restaurants plan, Johnson indicated they should just forget about it.

“They’re not going to have veto power,” he flatly stated.

“We know there are some community concerns,” he acknowledged, “but this program is really needed during these hard times.”

For the most part, the bill sailed through the vote by the full City Council, but a few members offered critiques and concerns.

Yeger said he initially supported the bill when the idea was announced a few months ago, in order to help restaurants get through the pandemic. But he balked at the idea of making it permanent without more review.

“There is no reason to adopt this bill in October,” he said. “We could do it in January, February, March… .”

Basically, Yeger said, he wants to see how the program works in the winter, for example, when snow shoveling and snow plowing will be needed, and the impact it will have on sidewalk space. He said that, as of now, he supported extending the program for one year, but not making it permanent beyond that.

“I think we need to be careful of the problems…,” he said. “Of course we want to support our restaurants. But we can’t ignore the public safety issues — garbage…UPS deliveries and snow removal. We should also be aware of the quality-of-life impact on upstairs residents.

“I think this is a good bill that gives us opportunity,” Koo said, “as long as there’s oversight.”

Karen Koslowitz, whose district includes Rego Park, Forest Hills and Kew Gardens, was initially skeptical about the outdoor seating scheme, but grew to like it and ultimately voted yes.

“The fact that we’re going to revisit it makes me very happy,” she said. “I love eating outside. My biggest concern was…how it would be when it snowed.”

An enthusiastic supporter, Keith Powers, whose district spans from Stuyvesant Town to the Upper East Side, as he voted “aye,” said he was “proudly in favor of outdoor dining.”

Councilmember Barry Grodenchik, representing eastern Queens, noted the program had only existed for a few months.

“We haven’t gone through the full four seasons [with it],” he said, yet voted yes.

Councilmember Jimmy Van Bramer (Sunnyside, Woodside, Astoria and Long Island City) said that helping eateries by allowing outdoor seating “is really not just a Manhattan issue,” noting, “I’m in a district where a lot of the businesses really need this.”

He hailed Open Restaurants as “one of the best things in the city” in a long time. In fact, he said, he’d like to see a similar program put in place for the arts.

“I hope at some point the city will take up ‘Open Culture,'” he said, “and help keep some of our arts spaces from going out of business.”

While Intro 2127-A breezed through the City Council, just two days earlier at a Community Board 2 meeting, Village residents strongly voiced their opposition to making Open Restaurants permanent. A running complaint at the meeting was that the real estate industry, abetted by City Hall, is making a blatant “land grab,” amounting to the privatization of public space to benefit the hospitality industry. That there has been no public review or input on the plan is completely outrageous, the opponents fumed.

Lack of enforcement is a huge issue for C.B. 2 members and Village residents. At the meeting, Zella Jones, a former chairperson of the C.B. 2 Sidewalks Committee, incredulously noted that the Department of Transportation, which is overseeing the Open Restaurants program, has zero previous experience running street-side seating.

On Thursday, Village District Leader Arthur Schwartz, who is running to succeed the term-limited Johnson as District 3 councilmember, blasted the mayor, Johnson and D.O.T. Commissioner Polly Trottenberg for being imperious and unaccountable to the public.

“The process being followed here is emblematic of the way that Bill de Blasio has approached governing New York City,” Schwartz said. “Decisions are made from on high, with little or no regard for community residents and community boards, and without serious studies about the long-term consequences of various decisions being made by the city, especially ones they call ‘permanent.’

“And it is a shame,” Schwartz added, “that Corey Johnson, once the chairperson of Community Board 4, isn’t making more noise about this.

“Few people oppose giving relief to struggling restaurants until the COVID crisis is over,” the Council candidate said. “I get it, I once was a partner in a restaurant. But arrangements to aid restaurants, even temporarily, have to be accompanied by rules and guidelines, especially guidelines about noise and safe sidewalk passage. Mayor de Blasio, and his all-powerful sidekick Polly Trottenberg — who is the modern-day version of Robert Moses, in my opinion — need to be reminded that the people of New York City ultimately run New York City.”

Meanwhile, in the city’s ongoing “Battle for the Streets,” anti-car activists — both here in New York City and elsewhere — are pumped about Open Restaurants becoming permanent. The program would mean thousands of fewer parking spots for motor vehicles — or less space for, as they put, “free car storage.”

From out on the West Coast, Michael Sellitto, deputy director of an AI research firm in Stanford, California, after reading The Village Sun’s coverage of Tuesday’s heated C.B. 2 meeting, weighed in with a sardonic tweet.

“Yes why would we want people to be able to enjoy outdoor space when cars could be enjoying it instead?” he posted. “Isn’t the happiness of cars the ultimate aim of humanity?”

After Thursday’s City Council vote, The Village Sun asked Johnson about the accusations that the program is a “land grab” and if, in fact, a “side benefit” of the D.O.T.-led initiative is slashing the city’s number of parking spaces.

Johnson simply answered, “Outdoor dining has so far been a crucial lifeline for the restaurants we love as they try to survive the pandemic. The Council is proud to keep improving this initiative over time, and we will continue to listen to small businesses as well as residents in order to ensure outdoor dining adds to our neighborhoods while causing as little disruption as possible.”