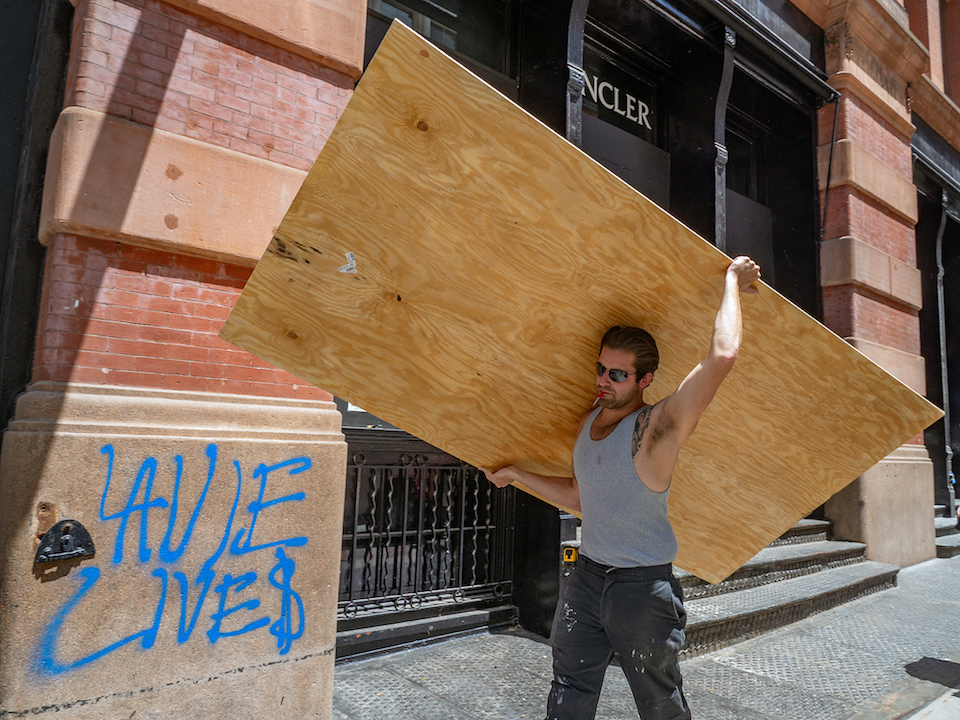 Boarding up a storefront in Soho in early June after the neighborhood had been rocked by a wave of looting. Some merchants are now boarding up again, fearing election-related looting and vandalism. (Photo by Milo Hess)

According to alleged “Internet chatter,” amid concerns of vandalism and looting around the election, Trump supporters were mobilizing to try to protect Soho on Monday.

The idea, apparently, was to avoid what happened at the end of May and early June when looters rampaged in Soho, ransacking its pricey boutiques.

Sean Sweeney, director of the Soho Alliance, e-mailed The Village Sun that he got a phone call Monday from a detective he knows at the First Precinct who gave him the heads up. However, the Soho leader admitted he remained skeptical.

“He said they have received some Internet chatter that a guy is organizing some ‘500 residents of Lower Manhattan who support Trump’ and who will be patrolling Soho and other spots with baseball bats and other weapons to deter Antifa and BLM looting,” Sweeney said.

“I told him there aren’t 500 Trump supporters in all of Downtown!! lol.

“Anyway, he said these vigilantes plan to ‘patrol’ the street in front of the Apple Store [at Prince and Greene Sts.] today at 5 p.m., but that the NYPD will discourage them from assembling. I told him I think the guy organizing it is a nut and doubt it would materialize.

“He also said the NYPD will have a heavy police presence and has plans to cordon off Soho if looting starts.”

Asked his thoughts on the rumor of Trumpites defending the district’s shops, Sweeney said, “I welcome police help. Vigilantes are not welcomed in Soho. … But I bet it is just some loser typing away his fantasies on a computer in his mother’s basement.”

Meanwhile, regardless of whether the alleged bat-wielding Trump backers were fact or fiction, there’s no doubt that merchants in Soho — as in other parts of Manhattan that were hit earlier this year — are taking matters into their own hands by boarding up their store windows.

“This morning I noticed new plywood on the windows of at least two stores in Soho,” he said, “Sunglass Hut, at West Broadway and Spring St., and Gucci, on West Broadway near Broome St. Gucci was vandalized extensively in June; they’ve already painted the plywood but I’m quite sure it’s recent. Probably more [stores are boarded up] on other streets.”

Indeed, The New York Post reported that many stores are putting up protection, including other Soho outlets, like Chanel, Dior, Moncler, Levi’s and Tiffany, plus Bed, Bath & Beyond near Union Square and Macy’s in Herald Square.

On Saturday, plywood could already be seen covering all the ground-floor windows at Macy’s but the doors were still open for customers.

At any rate, 5 p.m. on Monday rolled around and Sweeney strolled by the Apple Store to find…not much going on.

“There were three cop cars at the Apple Store but business and pedestrians were going on as usual,” he said. “No vigilantes.”

Sweeney, who is good at sleuthing out people through Internet searches, subsequently did one on the guy who posted on Facebook about organizing the Soho patrol and it turns out he’s not even local.

“He lives in North Carolina,” Sweeney said. “It is just some nutcase blowing his horn. … But I guess the cops had to take it seriously.”

However, the fear of election-related mayhem remains real in Soho — partly because it is being pushed hard by the major media.

The activist said he heard of one resident who recently finished a lavish apartment gut renovation who has hired guards to live in his place while he heads to his country house to ride things out.

“I have been fielding so many e-mails today,” Sweeney said.