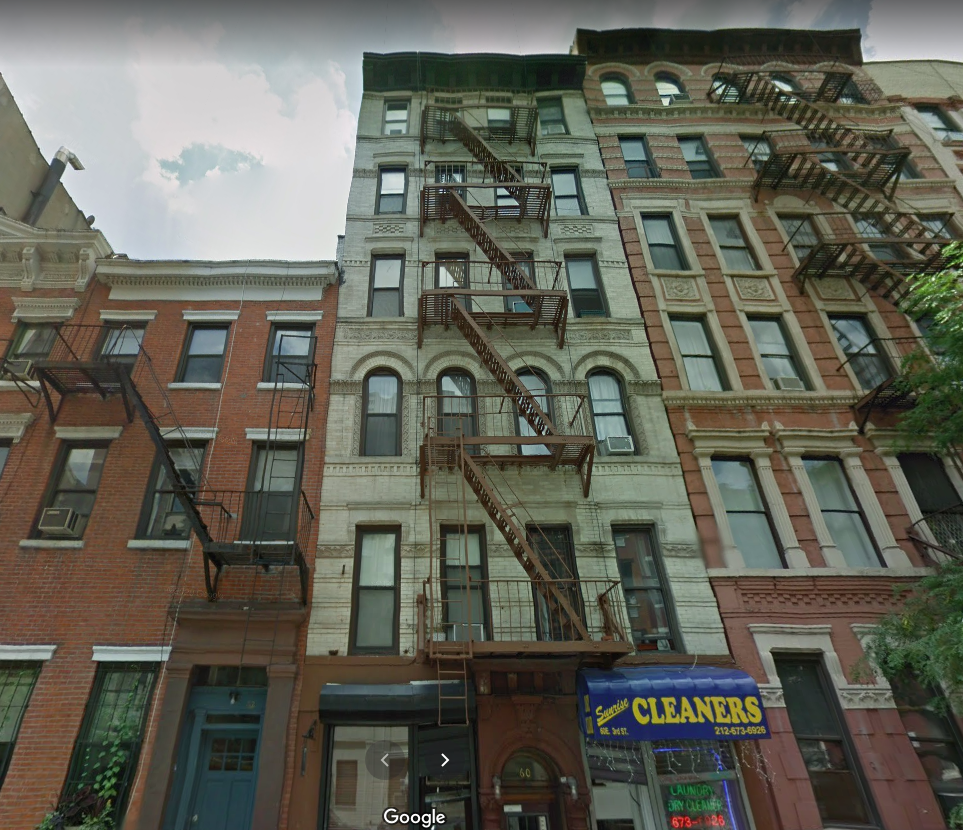 Police said a 23-year-old woman fell from the roof of 60 E. Third St. (the building with the cleaners on the ground floor) early Saturday morning but was reported in stable condition afterward. (Google Street View)

BY LINCOLN ANDERSON | A young woman partying on an East Village rooftop early Saturday morning went over the edge — but miraculously survived.

A police spokesperson said that, 10 minutes before 1 a.m., “a female, 23, apparently intoxicated, fell from a six-story rooftop after stepping over netting. She was removed in stable condition.”

The spokesperson did not have information on what hospital the woman was taken to. He said if she had died, though, police would definitely know about it and have more information on the incident.

As for how the woman managed to survive the fall, it might have been a question of where she landed, though, again, police did not immediately have further details on that.

If she plunged the full six stories to street level, it’s unlikely she would have survived or even been listed in stable condition, according to a police source. If, however, for example, the source speculated, she landed on the rooftop of the adjacent three-story building just to the east, that might explain why she wasn’t killed.

But Anne Hayes, who lives in the back of 58 E. Third St., the abutting building to the west of where the woman was partying, said what she heard initially — albeit secondhand through texts and calls from neighbors — is that the woman fell into “the yard.”

“There was a big response from police, fire, ambulance,” Hayes said. “I did hear lots of sirens racing by on Second St. but had no idea their destination was my block. It was reported to me that the young woman was attending a roof party at 60 E. Third St. and a group of her friends were on the sidewalk crying.

Initially, Hayes said she was unsure if “yard” meant the air shaft that her building shares with 60 E. Third St. or the rear patio area.

However, her superintendent reported that the woman landed right outside his apartment, which is located in the basement of Hayes’s building.

“He’s mentioned to several neighbors that he heard the thump when she fell,” she said. “And he texted me earlier today that she landed outside his window in the basement apartment.”

Hayes wasn’t immediately sure whether that meant the woman fell on concrete or packed earth.

“This is a sad and worrisome footnote to the ‘partying in the pandemic’ theme,” Hayes said.

In August, Hayes wrote a piece for The Village Sun about loud late-night patio parties plaguing her block amid traditional nightlife venues either not being allowed back open or forced to close their outdoor seating at 11 p.m.

“My neighbors and I are concerned because roof parties are a regular occurrence at the building just to west of me, 54 E. Third St., which has the same owner as my buildings,” Hayes told The Village Sun on Saturday. “Last night there was a rooftop party going on at No. 54 at the same time as the fall incident [at 60 E. Third St.]. That party continued until about 2 a.m., undeterred by the incident or flood of emergency vehicles on the ground below them.”

Hayes said an acquaintance of hers who works in the trauma unit at Bellevue Hospital told her that two other young patients who fell from rooftops were treated at Bellevue in just the past month.

“This person surmised that the young woman [who fell at 60 E. Third St.] would have been taken to Bellevue, as it is the local trauma unit, making her the third patient suffering from a serious fall,” Hayes said.

Update: For an exclusive interview with a neighbor who witnessed the rooftop party before the woman fell and firefighters saving her after the tragic accident, click here.